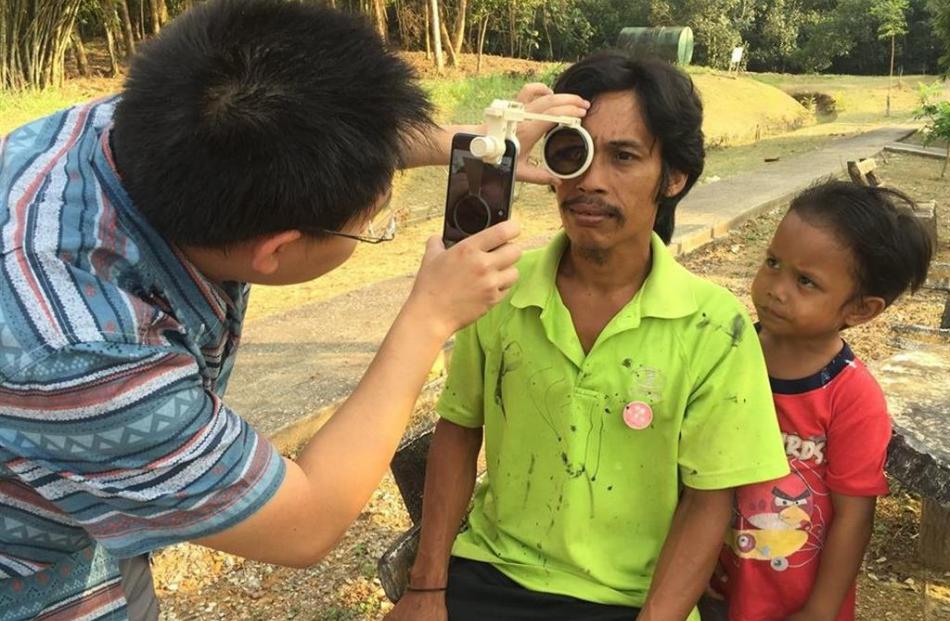 An award-winning Dunedin junior doctor has produced a world-first smartphone app to help diagnose people who may have sight-threatening illnesses.

Dr Hong Sheng Chiong's medical company oDocs Eye Care has created an app-kit that performs a similar function to $50,000 worth of eye-examination equipment.

Emergency eye diagnosis could be slow, unresponsive and expensive.

ODocs created a portable eye-care kit that used a 3D printer and a smartphone to create ocular imaging adapters that took pictures of the eye and retina, he said.

"There are other kits on the market that perform similar functions to the direct ophthalmoscope and are smartphone-enabled but they do not offer the same level of optics nor are they as affordable as our kit,'' he said in a statement.

Already, 200 units have been sold around the world and the open-source product downloaded by more than 2000 people in countries including the United States, Indonesia, Mexico, Egypt, India, Pakistan, Philippines, South Africa, Nigeria and Britain.

"This is particularly significant in developing nations, where high rates of preventable blindness are mainly due to a lack of access to professional diagnostic equipment.''

Half of oDocs' net profits would go towards preventing blindness in developing nations, he said.

In developed nations, equipment was taken for granted.

But traditional ophthalmic equipment was often bulky and hard to transport to people in remote communities.

People were trying their best to care for the patient but they did not have the right tools, he said.

Dr Hong and his team developed the prototype smartphone app and an open-source 3D-printable attachment that enabled doctors to easily view and photograph the back of the eye.

The company has just released the commercial version, the "visoScope'', which replaced the conventional direct ophthalmoscope and retinal camera used by eye doctors to diagnose conditions such as glaucoma and macular degeneration.

"Being able to see is something many of us take for granted. But for millions of people around the world, especially those in third world countries, the possibility of losing this vital sense is a very real and scary prospect - one that can happen simply due to the lack of expensive examination instruments to help diagnose treatable and preventable blindness,'' she said.

Ms Eastvold-Edwins said it was "incredible'' that Dr Hong managed to balance product development with his work in the eye clinic at Dunedin Hospital, where he "barely has time for lunch''.

He has a young child and tended to work at night after dinner.

oDocs had a team of about five, which included herself and a creative director, both of whom were full-time.

Being at the opposite end of the country to Dr Hong was not ideal but they were "managing pretty well''.

"As a start-up you have to just make do. We're working nights and weekends ... obviously we use some good software to help us working remotely.''

A mechanical design engineer, Ms Eastvold-Edwins said she had been involved in product development for 15 years and had never seen anything with such an opportunity, in terms of timing, the team's capability and the market opportunities.

Working on a project that effected real change was "amazing'', she said.

She believed the potential was "massive'' but the biggest struggle was with funding.

Serious funding would mean the company could grow much faster.

The company had received a small grant from Callaghan Innovation and $20,000 from the New Zealand Blind Foundation.

For the rest, it had been self-financed by the founding members and contributors.