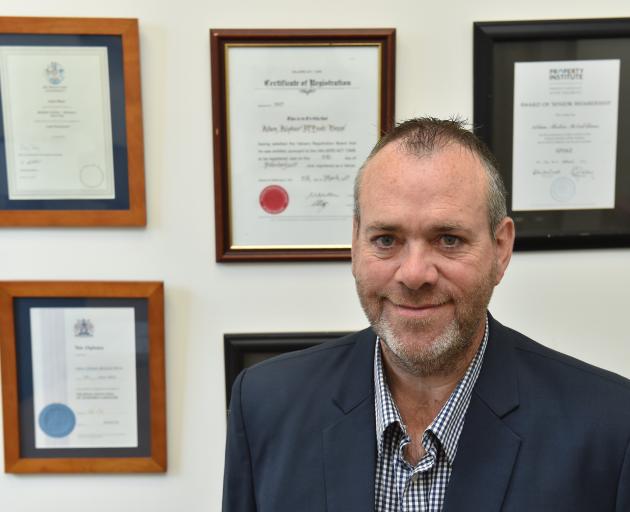 He will take over from Jeff Alexander when Mr Alexander’s two-year term expires in the middle of the year.

The NZIV, founded in 1938, is the governing body of registered valuers nationwide. There have been only four other Dunedin-based presidents previously, the last being John Dunckley in 1997-98.

Mr Binns was also recently appointed as an NZIV representative on the Property Institute of New Zealand (PINZ) board.

Originally from Yorkshire in the north of England, he has worked in the property profession for 33 years; the first 16 in the UK and the past 17 in New Zealand.

He left school at 16 and spent eight years in residential real estate agency and property management, before going to De Montfort University in Leicester as a mature student, gaining a first-class honours degree in urban land management.

He qualified as a chartered surveyor in 2002, working in commercial property roles in both London and Leeds, in the valuation, asset management and agency fields

In 2004, Mr Binns and his wife Lynne immigrated to New Zealand, where he joined DTZ in Dunedin, working in commercial and residential valuation, and becoming a registered valuer in 2007.

After a short spell as the Dunedin City Council’s investment property portfolio manager, he was the joint founder of a valuation firm in the city in 2009 and, as director, undertakes valuation and advisory work on a wide range of commercial property types.

While the number of people studying valuation at university had increased, issues remained concerning recruitment in the profession, Mr Binns said.

"On the whole, most firms would take on more if they could find them."

The profession had been working on the issue for some time. The average age of valuers in New Zealand was about 51 and the majority were nearing the end of their careers.

"I won’t be instigating anything new, but carrying on the work the profession has been doing to try and alleviate that situation," he said.

Being a valuer had been an extremely rewarding profession for him and had taken him "around the world", and that was another reason he had joined committees and boards.

"I very much want to give back to a profession that has been very good to me."

One of the hurdles for recruitment was that it was a big commitment, he said. It took at least three years’ study (four years in the case of Lincoln) and then three years’ experience with an employer before valuers could get registered.

"There are other professions that don’t have that kind of time commitment in order to get qualified."

How he would juggle his workload with the governance role was at the forefront of his mind when he was asked to step up to the president’s role.

Discussions were held within the firm as to whether it was manageable but the timing was good given that colleague and valuer Chris Scott became a registered valuer late last year.

"We made a collective decision within the firm that now was probably an OK time to do it. You never know if an opportunity like this is ever going to come along again," Mr Binns said.