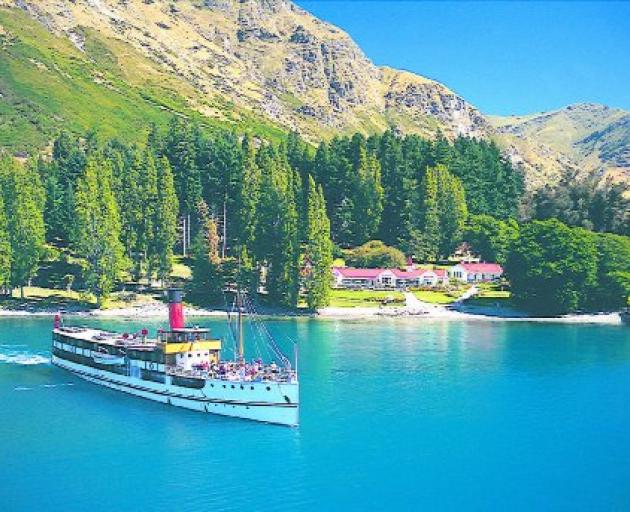 Real Journeys Group hit a ranking of 18th out of 20 on the Deloitte Master of Growth index, and its adventure tourism subsidiary GoOrange was ranked 37th on the Fast 50 index; pictured is Real Journeys' historic steamship TSS Earnslaw departing Walter Peak Station on the shores of Lake Wakatipu. Photo: Supplied
Southern businesses are well represented in the annual Deloitte Fast 50 growth companies, and more so in its Master of Growth division.

The Fast 50, in its 18th year, attracted around 40 entrants from the lower South Island, from Oamaru to Te Anau, Queenstown and Invercargill.

The percentage of revenue growth over three years, used to measure companies' success, was revealed at the national finals in Auckland last night, where the top companies in the Deloitte Fast 50 index were then ranked.

Electric Kiwi was first with 3602% revenue growth. Steel framing manufacturer Tuatara Structures, from the upper South Island, was ranked second with 1682% growth, and third was Vertex Engineers, of the North Island, at 1144% growth.

The highest southern ranking was Blue River Dairy, of Invercargill, at fourth, based on 938% growth. It produces sheep, goat and cow milk for infant powder.

It first appeared in the Deloitte Fast 50 in 2017 at 10th place, and that same year won the Westpac Southland Business Excellence Awards' Crowe Horwath Primary and Primary Services Sector Award.

The Chinese-owned company, now employing more than 100 staff, produced 400,000 cans of infant formula in 2016 and expects to reach 7.5 million cans this year and 15 million next year, following expansion.

Deloitte private partner Dan Hellyer said the Deloitte Fast 50 was a thriving centre for fast-growing businesses of all shapes and sizes.

''These innovators, entrepreneurs and pioneers of New Zealand business are accomplishing amazing things for their companies,'' Mr Hellyer said in a statement.

Next from the South, ranked 35th, was Night 'n Day Foodstores, Dunedin, a convenience grocery and food chain, with 224% growth, followed by GoOrange, an adventure tourism division of Real Journeys in Te Anau, ranked 37th with 209% growth.

On the Master of Growth Top 20 Index was Queenstown's South Pacific Fire Protection with its sprinkler and fire protection products, at 10th place with 324% growth.

In first place was Southern Construction, from the upper South Island, with 745% growth.

The Master of Growth index ranks the 20 fastest-growing established businesses achieving longer-term sustained growth, ranking them from a larger revenue base and over five years of growth.

The other unplaced southern finalists were Dunedin's Nomos One, which leases software for tenants, and TracPlus Global, a tracking service provider.

Entrants must be New Zealand-registered companies, have been in business for at least three years, have had operating revenue of about a minimum $500,000 and have a full set of audited accounts for the past three financial years.

All last night's technology businesses on the 2018 Fast 50 can also be nominated for the Deloitte Technology Fast 50 Asia-Pacific index, which will be announced in Hong Kong in December.

-Online restaurant-booking company First Table, of Queenstown, was a regional winner for ''Rising Star to watch'', but not a finalist.