Branching out onto the Taieri 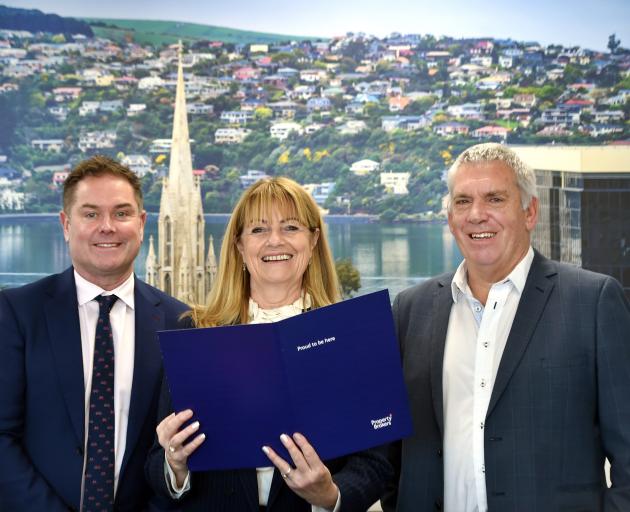 That is because the real estate firm is proudly provincial, which has led to its new presence in Mosgiel — its 10th branch office in Otago-Southland.

While the office was rebranded as from yesterday, it was otherwise business as usual for the existing team.

"You couldn’t get a more easy transition ... everyone stays at their desks — literally. It doesn’t get much simpler than that," Mr de la Roche said.

Ms Williamson and Mr de la Roche, who have been in the real estate industry for 31 and 27 years respectively, worked for Harcourts before establishing Living Corporation in 2004, driven by a desire to do their "own thing".

The family ownership of Property Brokers fitted with their own ethos and culture and the decision seemed "just perfectly right".

Property Brokers came with a much bigger network and resources and it was "going to make everybody grow", Mr de la Roche said.

Living Corporation had five sales staff, two personal assistants and a front desk/administration person. Property Brokers was also taking over the property management side of the business, which had two staff and was a separate company.

Property Brokers regional manager for Otago and Southland John Faulks was excited about the expansion into Mosgiel, saying it fitted exactly into the company’s branch structure.

Property Brokers’ branch network in the South now covered Invercargill, Winton, Gore, Wanaka, Alexandra, Ranfurly, Mosgiel, Dunedin and Oamaru, and it also had a presence in Balclutha through Farmlands.

Mr Faulks, who has lived on the Taieri for 20 years, said he loved the area. He had watched Mosgiel grow since driving over the hill to Dunedin to sit his driver’s licence when he was 15 — the examining officer did ask how he got there.

Asked his thoughts on the state of the property market, Mr Faulks said he was "really positive" about it. The market in the area was settled and there was still buyers there.

Having been involved in the industry for a long time, Mr de la Roche said they had "seen all the cycles" — from the tough times through to the good ones.

Between Hillside, the University of Otago, Otago Polytechnic and the Dunedin Hospital rebuild, they were noticing people starting to come down from the North Island to fill jobs.

People no longer wanted to live in the big cities, he said.

Mr Faulks said he was passionate about the area; it was a great, safe place to bring up children and it had all

the infrastructure, from schools to the university, hospital, sports grounds and Forsyth Barr Stadium.

"You’ve got everything you want down here ... to me, we take it for granted," he said.

Mr de la Roche said the job was about people, not about selling houses and he found people "absolutely fascinating".

He was looking forward to dealing with the public a lot more now, while Ms Williamson — who had historically done a lot of townhouse sales in Mosgiel — would also concentrate on her selling.

"The sale is very much a positive thing, we feel really good about it," he said.