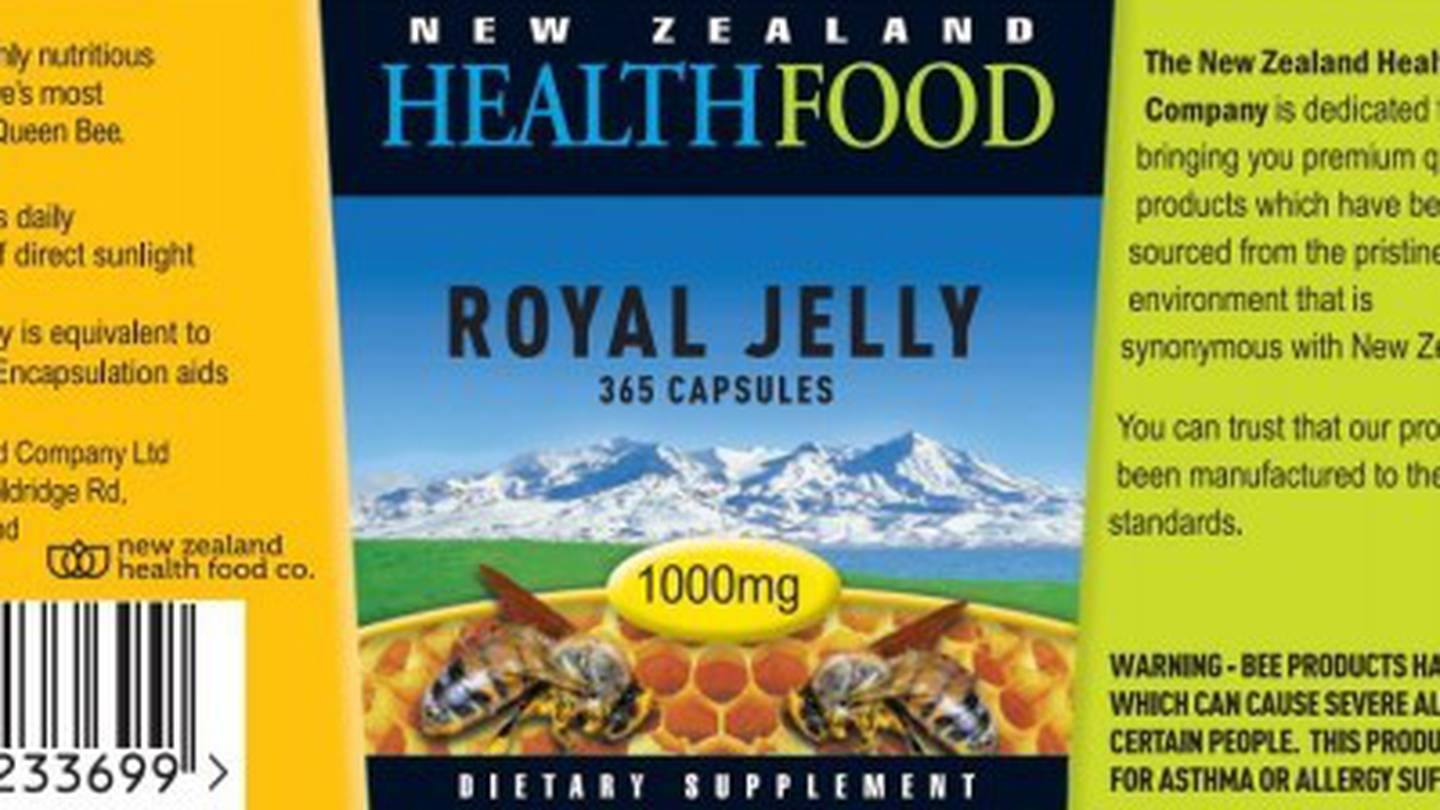 The New Zealand Health Food Company Ltd has been fined $377,000 for conduct liable to mislead the public over the origins of its ingredients in some products. Image: Supplied via NZH
A Christchurch-based health supplements company has been fined $377,000 after "reckless" marketing suggested royal jelly products came from New Zealand, when in fact they were sourced in China.

However, the main constituent ingredient, royal jelly – a gelatinous substance produced by honey bees which is a rich source of highly concentrated nutrients - was in fact sourced in China, with the majority of secondary ingredients also coming from overseas, including Indonesia, Malaysia, China, Papua New Guinea, North America, and Samoa.

The company, which was established in 1988 and has 15 fulltime employees, was charged by the Commerce Commission under breaches of the Fair Trading Act 1986, for engaging in conduct that was liable to mislead the public over place of origin in their royal jelly health supplements. The charges carried a maximum penalty of a $600,000 fine.

The Commerce Commission's main concerns came over the labelling of the supplement's jars or containers.

Labels for a New Zealand Health Food royal jelly jar of 365 capsules featured two bees on a honeycomb in front of pasture and mountain scenery.

It also featured an outline of the map of New Zealand, along with the words 'NEW ZEALAND', and a statement, "The New Zealand Health Food Company is dedicated to bringing you premium quality products which have been sourced from the pristine environment that is synonymous with New Zealand".

The Commerce Commission said that the "overall impression" was "false and/or misleading", because the royal jelly was from China and not New Zealand.

Appearing for the Commerce Commission, Alysha McClintock said while the labels stopped short of saying they had been made in New Zealand, "just about everything they did say conveys exactly that".

"And quite frankly, that must have been the intention," she said.

McClintock said the company's conduct was, at a minimum, "highly reckless", if not deliberate.

The company's Manuka South brand, which is largely made up of manuka honey products, also came under scrutiny with its royal jelly range.

The summary of facts, obtained by the Herald, says that some Manuka South royal jelly jars, which were in use since at least October 2019, had "100% NEW ZEALAND" text.

And when considered alongside the brand name, Manuka South, with manuka strongly associated with New Zealand, and "south" the South Island of New Zealand, it created an impression that the royal jelly and other ingredients were from New Zealand, the Commerce Commission said.

New Zealand's competition, consumer and regulatory agency calculated that the company directly earned around $1 million from the offending products.

Misleading conduct around the place of origin of goods, the Commerce Commission said, can reduce trust in "100% New Zealand" or "NZ made" claims made by other businesses and disadvantage competitors who do make products here.

Defence counsel Richard Raymond QC, appearing for the firm, said while it looked bad, he rejected any suggestion that the conduct was deliberate.

The lawyer accepted that the conduct of company was "highly careless" but denied it was "deliberate".

The royal jelly product had become part of their Manuka South range, which were all genuinely New Zealand sourced products, Raymond told the court.

The mistake came, he said, when the marketing manager at the time included the royal jelly alongside other manuka honey products.

"Clearly, it was, at best, sloppy and poor from the team responsible and of course as soon as it was identified to senior management […], it was changed," he said.

The company started the process of changing the labels even before it heard from the Commerce Commission, recognising changes needed to be made, Raymond said.

Judge David Ruth, however, concluded that the conduct was "reckless".

He highlighted the fact that in 2012 the Commerce Commission wrote to the company's founder and majority shareholder Rob Haines, and other Kiwi traders, with advice over place of origin labelling in dietary supplements.

Taking into consideration the company's early guilty plea, and no previous convictions, Judge Ruth fined it $377,000.