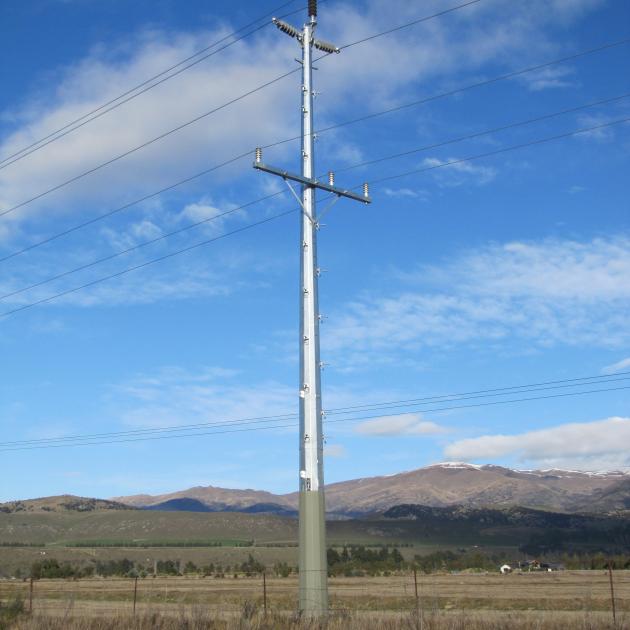 An Aurora Energy power pole in Upper Clutha. PHOTO: ODT FILES
The Dunedin City Council’s group of companies is expected to make a profit big enough to cover an annual contribution of equity to Dunedin Railways and increased debt repayments.

Dunedin City Holdings Ltd (DCHL) returned a net profit before tax for the half year of more than $1.25 million, which was $3.15 million better than budget projections.

DCHL was instructed by the council to fund Dunedin Railways’ operation of a limited service schedule in 2021-22, at a cost of up to about $2.1 million.

The council also decided in November DCHL should be required to fund Dunedin Railways for up to $2.4 million a year until July 2024, effectively instructing it to absorb losses from running limited services amid constrained international tourism.

Dunedin Railways reported a loss after tax of $719,000 in the six months ending in December, compared with an $83,000 loss for the corresponding period a year earlier.

The variance in DCHL’s budget was due to City Forests presenting a higher dividend to the group than had been budgeted, DCHL said in its interim report.

Councillors are expected to receive an update on the council companies this month.

Aurora Energy posted an after-tax profit of $6.9 million in the six months to December, up from $461,000 in the same period last year.

Its operating revenue was $63.9 million, up $5.7 million on the year before following "strong" customer connections.

The company’s operating expenses, which included network maintenance and asset management, were $2.4 million lower at $55 million.

Capital expenditure was $36 million for the six-month period.

Dunedin Stadium Property Ltd, which owns Forsyth Barr Stadium, recorded a loss of $3.2 million in the first six months of the financial year.

The impact of last year’s Covid-19 Alert Level 4 lockdown resulted in Delta Utility Services’ profit dropping by almost $700,000 in the first half of the financial year.

Its total operating revenue for the period increased 7% to $52.1 million.

The pandemic caused Dunedin International Airport Ltd’s profit to decrease by about $800,000.

The airport recorded a profit after tax of $230,000, down from $1 million the year before.

The company’s half-year report said decreases in passenger numbers had a direct impact on both aeronautical and non-aeronautical revenue streams.

The airport’s total revenue for the period was $5.7 million, down from $7.6 million.

Dunedin City Holdings Ltd has previously signalled a dividend of about $5.5 million is likely for the council in the 2022-23 year.

"Dunedin Stadium Property Ltd, which owns Forsyth Barr Stadium, recorded a loss of $3.2 million in the first six months of the financial year."
Build it and they will come. LOL.