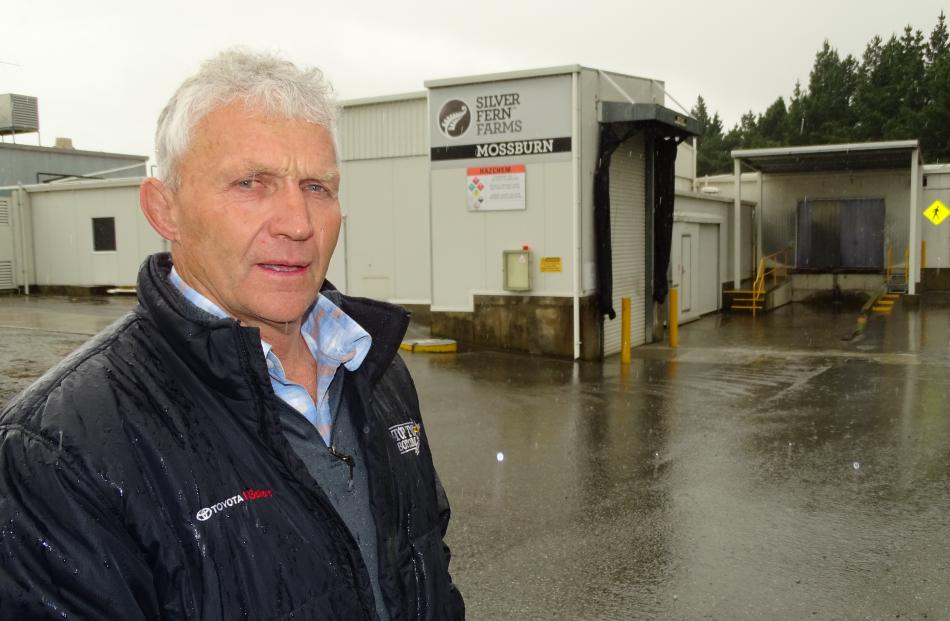 Mossburn is known as the ``Deer Capital of New Zealand''.

The mood in Mossburn yesterday afternoon was sombre and while no-one spoken to by the Otago Daily Times seemed surprised by the proposed closure of the plant, which employs 43 staff, all agreed it was devastating for the small town.

Silver Fern Farms announced in a statement it was consulting staff at its South Island Mossburn venison plant and at its North Island Wairoa mutton processing plant, on ''options for closing the two small sites''.

Chief executive Dean Hamilton said both plants operated in regions where there were other plants which could manage the combined levels of livestock processing.

Employees at Mossburn were given options to work at the company's plants at Waitane, near Gore, Kennington, near Invercargill, or Finegand, near Balclutha.

Southland district councillor for the Mararoa Waimea ward, John Douglas, who lives almost directly opposite the plant, said while the closure was not ''completely unexpected'', it did not make the news any easier.

''It still comes as a huge shock. It is devastating to a community as tightly knit as what Mossburn-Northern Southland is.

''I've just spoken to some of the boys in there. They're pretty gutted.

''Many of them have put a life's work into the plant.

Cr Douglas said it would be ''at least'' an hour's commute each way daily to either Kennington or Waitane.

Given the town's long history with deer recovery and processing feral deer - the reason it was dubbed the country's deer capital - it was a ''body blow for the whole community'', particularly given it was one of the two major employers in the township of about 200 people, Cr Douglas said.

However, he was keen to explore ''all options'' for the future of the plant, and its employees.

He spoke to Venture Southland shortly after the news was released at 11.30am to see if the plant could be repurposed.

Bracken Hall Cafe owner Margaret Taylor said the news was ''very sad'' for the community, but not entirely unexpected.

Mrs Taylor, and her husband George, were the owners of New Zealand's first deer farm, at West Dome Station.

They stopped deer farming about 10 years ago and times had been tough for many during the past decade, she said.

The plant normally shut down over winter. While some years ago, the shutdown had been for only about six weeks, Mrs Taylor estimated it had closed about June and had not yet reopened.

She understood some staff had already relocated from the wider area as a result.

''It's a long time to be without work.

''In the last few years it [the shutdown] has got longer and longer. I guess that's just the downturn of the venison trade ... they never know when they're going back to work.

''I think most of the locals would have seen it coming.''

One resident, who asked not to be named, said the closure would ''kill people''.

''What are people going to do?

''We were talking about it yesterday. We knew there was a meeting, but we had no idea they were closing the place.''

The woman believed many of the employees would be unlikely to commute to Kennington or Gore for work, because of the time and cost of travel.

Other employment options in the town - a popular stop for people on their way to Te Anau - were slim, leading her to believe many of the 43 staff and their families might have no choice but to leave.

''This is going to devastate so many people,'' the woman said.

The Dome Cafe owner-operator Shelley Cavanagh said the effects of the closure would be felt both personally and professionally by her.

While she had many friends employed there, who were now potentially without work, her businesses also did a lot of catering for the plant.

However, Mrs Cavanagh believed the community would rally around those affected by yesterday's news and do everything possible to support them and ''keep them here''.

Cr Douglas said if anyone had offers of work in the area they could contact him or plant manager Steve Webster.