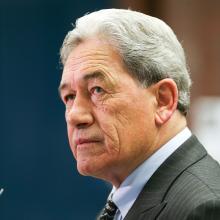 Winston Peters
The New Zealand dollar has fallen about 2% to a five-month low after the NZ First Party opted to form a coalition with Labour, bringing in a government that has vowed to reduce migration, potentially putting a brake on one of the nation's economic drivers.

The New Zealand dollar was trading at 70.08 US cents as at 8:30am in Wellington from 71.29 cents yesterday, before the announcement on the new government. The trade-weighted index fell to 73.79 from 75.18.

The new coalition, with Labour leader Jacinda Adern as prime minister elect, has not yet named Cabinet ministers or set out its policy priorities but financial markets have already weakened the New Zealand dollar on speculation the new government may borrow and spend more, curb migration, tweak the Reserve Bank Act and may raise the minimum wage.

"Peters' talk of fighting capitalism and his (and Labour's) more populist agenda don't sound market-friendly at face value, but the reality is that we'll likely see only a minor shift in economic direction," said Jason Wong, currency strategist at Bank of New Zealand, in a note.

"A cloud will overhang the NZD until we get more policy detail over the coming week, but we'd expect the negative impulse from domestic political forces to quickly fade before more important global forces take over."

"Our currency forecasts can be considered under review until we get more policy detail, but we already had the NZD lower at 0.70 by year end and into the high 0.60s next year," he said.

Ms Ardern intends to wrap up the final areas of agreement in the next 24 hours and said Labour will hold a caucus meeting to elect cabinet positions today.

She will confirm and announce ministerial portfolios later this week and sign and release agreements with NZ First and the Green Party early next week.