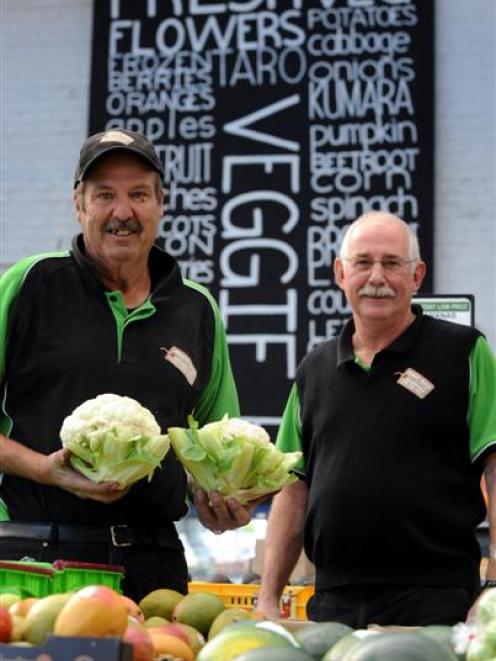 And while their official slogan is "for affordable fruit and vegetables" their real motto was "we're getting too old not to do things", Mr Gazeley said.

When the business partners opened Veggie Boys, in Cumberland St, Dunedin, late last year, it was the fulfilment of "a bit of a dream".

Business has been brisk and the pair already have plans to open two further sites, in north Dunedin and Mosgiel.

"It's a thing we needed to do, to take a gem of an idea you talk about for so long, to make it work. And to really work for you, it's incredible," Mr Hay said.

"We always thought that it would go good but we weren't quite sure it would go this good," Mr Gazeley added.

Expanding to more stores was not the initial idea - they set out to "finish a dream" - but the demand was there, they said.

Both men are in their 50s and a lot of people could not understand why they would open a business at their age. But age was not a deterrent.

The pair, who had known each other a long time, had talked about it for many years.

The time came when they were both ready for a change and, as they were getting older, came the realisation they had to do some of the things they had talked about.

Mr Gazeley had spent most of his working life in the produce industry, and Mr Hay had been in retail.

They knew the industry and what was required and they knew there was an opening for such a venture.

People were looking for fresh, affordable fruit and vegetables in a central location that was easily accessed.

There were four staff, including themselves, when they opened in December and numbers had since grown to 18 full and part-time staff.

Mr Hay looked after the administration side, while Mr Gazeley looked after most of the produce buying and display work. They made decisions together.

"Either one of us could have done it on our own. I don't think it would be as much fun, to be honest," Mr Hay said.

Both born and raised in Dunedin, the pair were passionately Otago - "rugby and all".

Their preference would be Otago-Southland sourced product and they welcomed approaches from growers in the region.

They were both firm believers of being hands-on in the business and while their aim was always to earn a good income, they wanted an enjoyable workplace.

They believed customer service was one of their strong points.

"They [customers] are your bread and butter. If they don't come through the door, you don't pay wages. A lot of people have forgotten the customer."

Their main focus was trying to "give people what they want, not what people think they deserve", Mr Hay said.

Every decision they made, whether right or wrong, they were responsible for and they enjoyed that they were not answerable to anyone.

"We talk. We both know our jobs, what we've got to do to make the business work. We're too old to lose now," Mr Hay said.

And as long as business remained fun, there was no need to retire, they agreed.