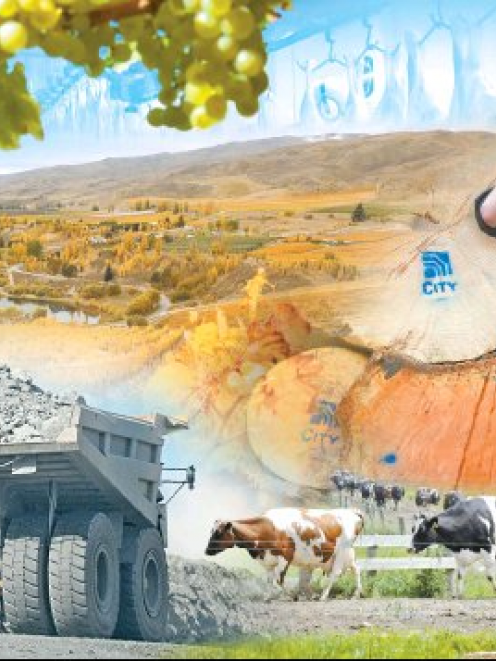 The latest Business and Economic Research Ltd (Berl) report on the Otago economy provides some recent evidence of how the province is faring compared with the rest of the country, and it contains some surprises.

One of the surprises, however, is how important primary industry is to the region, despite the sector not being the largest employer.

A major surprise in the report was there being hardly a mention of the impact tertiary education makes to the Dunedin, and regional economy. It was there, but not in an easily recognisable form.

Berl said the regional economy was 2.8% larger in 2012 than a year earlier.

That was an improvement from 2011 when the economy had contracted by 1% on the previous year. During the past 10 years, the Otago economy grew by 2.2% compared with a 2.3% national average.

Otago Chamber of Commerce president Peter McIntyre sounded a warning on interpreting the figures contained in the Berl report. While Otago overall had some positive growth during the previous decade, the nearly stagnant Dunedin City economy had been a drag.''

If Dunedin was taken out of the equation, then Otago pretty much leads the country.''

That was based on the work being undertaken in the surrounding areas. Dunedin has lost big businesses and they had stayed away. Smaller businesses were starting up in the city, but that still kept GDP and GDP per capita in Dunedin below the national average.

Mr McIntyre questioned whether there was something local authorities were doing in the regional centres that was not being undertaken in the city.''

The council performances are not measurable in the Berl report, but it does suggest those areas are far more welcoming to business. The Clutha District beats us on several measures.''

I don't want to walk down the main street of Dunedin in 30 years and be greeted with tumbleweeds, like in an old Western. Dunedin needs to send out signals it is open for business and we are an easy place to do business,'' he said.

The business services sector, the largest sector in terms of contribution to GDP, had GDP net gains of $31 million.

Berl attributes the increase to an increase in economic activity in the rental and hiring services (except real estate) industries and professional, scientific and technical services industries.

Overall, Otago lifted its GDP by $231 million last year, which came with a gain in employment brought about by the establishment of 162 new businesses.

Based on key performance indicators, Otago performed better than the national economy but 2012 had been a period of recovery for the region and the country after the global economic crisis in 2008 to 2010, Berl said.''

Mr McIntyre said a recent ANZ regional survey out this weekshowed Taranaki surging ahead of Otago because of the impact of oil and gas on the region's economy.

That success could and should be repeated in Dunedin. Oil and gas exploration, along with inward investment from Chinese businesspeople, had the potential to significantly boost the regional economy, Mr McIntyre said.

Berl said the primary sector remained a vital component of the regional economy.

Last year, the primary sector contributed more than $856 million in GDP, or 12.5% of the region's total GDP. The leading contributors were agriculture on $616 million, agriculture, forestry and fishing support services with $140 million, and forestry and logging with $120 million.

This growth is primarily accounted for by agricultural and metal ore mining-related activities.''

A notable contributor was sheep/cattle farming and dairy activities in the Waitaki district and and increase in milk and milk products prices.

Dunedin city was the site of more than half of the economic activity in the region in terms of employment and GDP. Queenstown-Lakes District was home to about one-sixth of the activity, although almost 25% of the business units. The other three districts - Clutha, Waitaki and Central Otago - had similar shares of about 10% each for employment, GDP and business units.

In another surprise, Berl said in the year to March 2012, Otago's population grew by 0.6%, sitting slightly above the national average, although the rounded figures did not clearly show that.

The retail trade and services added 401 employees in the year, primary added 356, wholesale and distribution 235, arts and recreation 121, business services 94 and manufacturing 15.

There were employment losses of 270 in construction and 288 in social services.

Dunedin City and Clutha had employment growth below the Otago average while the remaining three districts had higher GDP growth than the average.

Major contributors
• The business services sector contributed nearly one-fifth of the region's GDP and more than a third of business units in the region last year. Reflecting the high-value, small-size nature of businesses in the sector, it ranked fourth in terms of share of employment at 14.2%.
• The social services sector employed almost one in four workers in 2012, and contributed nearly one-fifth of GDP in Otago.
• The manufacturing sector produced almost 15% of the region's GDP and nearly 10% of employment. It had a relatively small share of the business units, as firms in the sector tend to be large.

At a glance
• The Central Otago District registered growth across most of the key performance indicators. Growth was driven by the primary and manufacturing sectors.
• The Central Otago District had a slight decrease in business unit growth brought about by the decline in business units in the construction sector.
• The Clutha District managed growth in some key indicators, a number of which registered contractions in the previous year. The resident population growth and business size growth were negative in the year.
• The 8.9% growth in GDP in the Clutha District was mainly because of the rapid GDP growth coming largely from primary and business services sectors.
• Dunedin City grew its resident population and business units while labour productivity remained constant. The city grew less quickly than the region across all key performance indicators except for resident population growth. Compared with the national situation, the city performed better in terms of population growth and business unit growth.
• The contraction in Dunedin City's GDP growth, and consequently in GDP per capita growth, was because of the decrease in GDP for construction and manufacturing sectors.
• The Queenstown-Lakes District performed well in the year to March 2012 as reflected by growth in all key performance indicators. The district's growth in all key performance indicators was also higher than the equivalent national rates and the region, except for labour productivity growth where the regional figure was higher than the district's figure.
• The Queenstown-Lakes District growth in GDP occurred in the primary, manufacturing and wholesale and distribution sectors. There was a contraction in the construction sector.
• All of the Waitaki District's key performance indicators showed growth in the year to March 2012 except for resident population growth. Apart from the last indicator, the Waitaki District performed better than the regional and national situations.
• The increase in the Waitaki District's GDP was because of a significant increase in the primary and manufacturing sectors, which offset the fall in construction sector GDP.