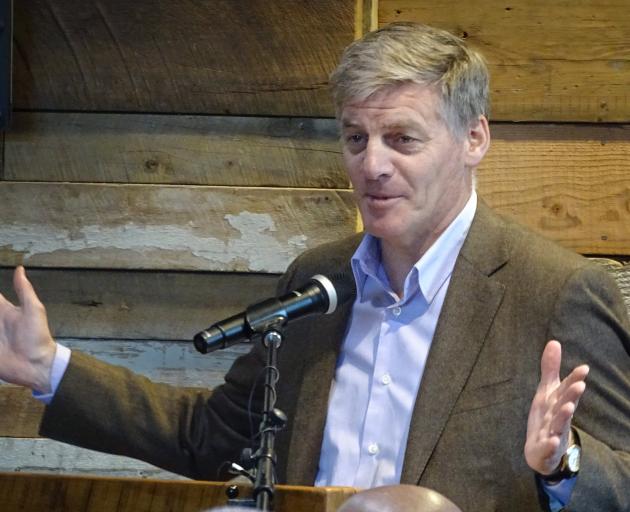 Former Prime Minister Sir William English was a keynote speaker at Investing in New Zealand Seminars in Singapore this week; he is pictured here speaking at the official opening of Camp Glenorchy, Otago in March, on the eve of his retirement from politics. Photo: Tracey Roxburgh
Former Prime Minister Sir William English remains upbeat about the New Zealand economy despite some headwinds both at home and abroad.

"As we see growing uncertainty around the US interest rate track and trade wars, New Zealand — and to a significant extent Australia — is again starting to look relatively more stable and maybe a home for investment that wants to be in a more stable, perhaps more defensive environment," he told the NZX Global Dairy and Investing in New Zealand Seminars in Singapore.

Sir William — who gave the keynote speech — said he had no plans to comment on the policies of the Labour-led Government, but would touch on aspects of the market that are "sufficiently embedded and have helped generate sufficient economic momentum that the politics of the day don’t make too much difference, except in a couple of respects".

He said the National-led government had paid a great deal of attention to the management of the Crown balance sheet and as a result, New Zealand "has the best managed public balance sheet in the world."

He said most governments in developed nations have sophisticated information about the debt side of their ledgers, but almost nothing on the asset side.

Yet a key factor in managing risk is knowing what your assets are.

"The Singaporean Government might know, the New Zealand Government certainly does. You probably won’t find another government in the developed world that knows just what assets it owns or what conditions they are in."

Sir William said that around the world, a lot of pressure on current expenditure was generated by poor capital expenditure in the past.

"One of the reasons New Zealand has such a sound fiscal position is precisely because of the depth and extent of capital discipline," he said.

Another of the comparative advantages that New Zealand could build on was its ability to execute sensible regulation.

Sir William said the public clearly wanted a dairy industry that "has pretty much no polluting impact" and the nation had an opportunity to create a world-leading mix of "economically-incentivised regulation of agriculture production".

"There are a couple of things that are going to make it a bit hard for the dairy industry and everyone else in New Zealand and investors need to understand them as uncertainties rather than, as yet, obviously a negative," he said.

The first involved potential changes to the country’s industrial relations system. The Government has legislation before the House to unwind industrial law changes restricting collective bargaining, and has a separate working group tasked with investigating sector-wide collective agreements.

Sir William said the aim of the measures appears to be the revival of the industrial structure of the 1970s and "no-one quite knows how that will play out".

That uncertainty was weighing on business confidence and was a "bit of a cloud on the horizon."

The other major headwind was how global events would affect New Zealand, he said.

Among other things, Sir William said markets had underestimated the problem of fiscal policy in the United States, which was "heading for debt levels they have never had".

It was just a question of time before the US set out to "inflate away the debt," he said.

The "fiscal dynamics in the US are really bad" and something the bond market was already responding to.

Sir William said it was also difficult to envision how the US and China could "unwind the trade war" they had embarked on, as both needed growth and neither could afford to lose face.

The only option for a resolution was that concern about the impact on growth forced the parties to hammer out some sort of a deal "and then pretend that neither of them has backed down".

Importantly, Sir William said "New Zealand can’t and won’t get into that kind of trap". The fact that it had seen no growth in inequality during the past 10 years "partly accounts for a bit more settled politics" than in other countries, and that was conducive to investment.

Overall "I haven’t come to tell you everything is going wrong because, actually in New Zealand, most things are going right," he said.

He declined to comment on political ructions that resulted in Botany MP Jami-Lee Ross leaving the National Party this week and accusing leader Simon Bridges of breaching electoral law in his handling of donations.

It's no wonder he lost to Peters. There is a lot wrong with the new economic management under labour from higher tax ban on foreign buyers oil exploration ban wild spending sprees...I am most surprised he does not see it