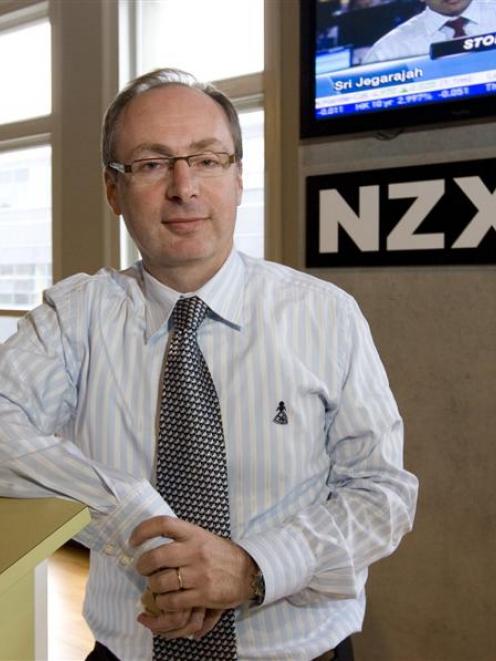 Andrew Harmos has been named chief executive officer of the New Zealand Stock Exchange. Photo New Zealand Herald.
The new chairman of NZX takes the reins at a challenging juncture in the New Zealand stock exchange's history, but remains optimistic about its long-term prospects.

Market commentators say the NZX faces a huge challenge as its main board continues to lose major companies while experiencing a lack of up-and-coming smaller listings.

The total value of shares on the main board traded in August also fell 22% from a year earlier.

Mr Harmos said it was a difficult period internationally for capital markets, and New Zealand was no different.

But he took heart in the opportunities still untapped.

"We have reason for optimism in terms of growth of listings.

"We're dramatically under-represented on our market by the things that actually drive our economy.

"Our markets don't reflect the strength of our rural sector, the strength and opportunities inherent in our infrastructure sector.

"We've got a strong and growing debt market and there are a lot of opportunities for future debt offerings and issuances, both at a local body, government level and SOE level as debt issuers."

Mr Harmos said the ability to access public markets for capital and the removal of "redemption risk" in co-operative structures remained drawcards to a listing.

The growth of KiwiSaver also meant more funds are available for investment, and the listed sector was a natural mechanism for companies wanting to tap into those funds, he said.

He did not see a polarity between his day job and that of his role at the NZX.

"There would certainly be nothing more pleasing than to see [mergers and acquisitions] activity driven by New Zealand businesses wanting to grow.

But M and A activity will be there, and it will represent a normal ebb and flow," he said. - The New Zealand Herald.