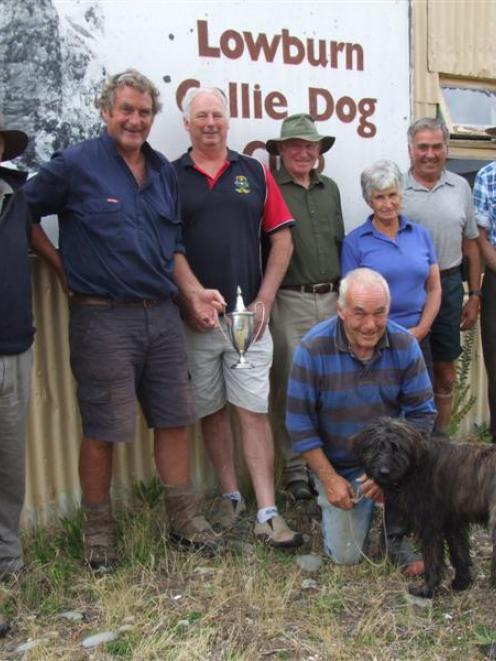 And in the words of one of its stalwart members, Jack Davis, reaching that achievement is a ''bloody great effort''.

For the club has had a colourful history, including uncertainty over its future because of the construction of the Clyde Dam and raising Lake Dunstan.

The Ministry of Works did not originally understand the ''social significance'' of the club in the Lowburn community, committee member Bob Perriam said.

Records showed the first trials were held behind the Lowburn Hotel 100 years ago after musterers and runholders spent many hours in the hotel ''discussing'' who had the best dogs, Mr Perriam said.

The venue for later trials soon moved to a larger site at the southern end of Sugarloaf. With no club facilities for many years, the hotel continued as the meeting place, with the publican being made the first patron.

During the Depression, the club declined in size and there were no trials between 1931 and 1935.

During World War 2, with several members overseas, the trials were reduced to one day in an effort to keep them going. In 1942, they had to be postponed altogether but were held again two years later.

The late 1970s saw a time of biggest uncertainty with the Clyde Dam proposal.

The original Ministry of Works plans involved a new highway constructed against the base of the Sugarloaf hills for most of the length of the flats through the trial grounds were.

That upset stalwart members, facing the threat of losing the club's grounds, and a concerted effort was made to showcase the grounds as among the best in New Zealand, which also lead to the timely awarding of the South Island and New Zealand championships to Lowburn in 1982, Mr Perriam said.

Adding to the pressure on the ministry, landowner the late Charlie Perriam refused to negotiate further on land purchase until the club's needs were met.

Fresh plans were adopted, enabling the trial ground to continue with only a zig-zag hunt course shifting to the northern end.

When the property was sold to developers, the entire face and lower flats of Sugarloaf were vested in the Central Otago District Council as a scenic reserve, securing the trials ground's future.

Some of the club's stalwart members, all with long family associations with the club, gathered last week, reminisced about days gone by and also expressed some concerns about the club's future.

There had been many changes over the years, the biggest being the ''sheer pressure'' of what was now a very busy State Highway 6 close to the grounds.

Duncan Henderson, the club's assistant secretary, recalled going to the trials with his mother helping in the cookshop, before he went to school.

It had been ''good fun'' and he hoped the club could continue but that was doubtful, largely because of tenure review and fewer farms.

The club's president, Peter Morton, whose grandfather was a successful competitor at the first trials in 1915, was also concerned about the future, citing the logistics of the event and also saying there were not the young people in the area to join the committee.

Mr Morton's involvement began through the Young Farmers Club, whose members were used as sheep liberators.

He progressed through various positions and is now serving his second term as president.

It had been a real family and community event over the years, he said.

Jack Davis, who started dog-trialling when he was 15, said he enjoyed the camaraderie involved and also the challenge of the sport.

He attends between 15 and 20 trials a season. While he had judged at the national championships and been on the leaderboard at the event, he had never made a New Zealand run-off.

This year, he has a new trials dog called Dick, whom he described as ''very interesting''.

''You can take from that whatever you like - it covers my options,'' he laughed.

The Lowburn trials will be Dick's ''maiden voyage'' and Mr Davis will also be running two other dogs, while also being in charge of the short head and yard course.

Triallists enjoyed the Lowburn trials - the first of the season - as they wanted to compete on what were national courses, he said.

Mr Perriam said the steepness of the Sugarloaf hill was always a challenge, while another long-time club member, Murray MacMillan, from Mt Pisa, recalled once riding a motorbike up the hill on the promise of a dozen of beer - which he never received.

The MacMillan family supplied sheep for the trials for many years, until tenure review stopped that three years ago.

While the trials might have taken three days, they involved a week's work for the club by the time members organised the sheep, Mr MacMillan said.

Bannockburn farmer Richard Anderson's involvement with the club dated back to 1961 when he was ''talked into it''.

''Forced into it, probably,'' he chuckles.

Mr Anderson (76) was involved with running the New Zealand championships in 1962 and 1972, spent 11 years as secretary and is now the club's patron, a role that required ''just wandering around''.

Describing himself as ''not a great doggy man'', he was looking forward to this week's trials.

''I'll even run a dog if it doesn't let me down. We'll start and we probably won't finish,'' he said.

Geof Brown's father and grandfather were both involved with the dog trials. Geof Brown used to come down to the grounds when he was a child and started liberating sheep after leaving school in 1969, with ''huge days'' spent on the hill.

He used to drive the sheep down the road with Mr MacMillan for ''years and years''. In those early years, by the time he had arrived at the grounds, he had sometimes been given a couple of cigars and several beers.

Nowdays, he was head shepherd for the trials, making sure there were sheep in the pens early in the morning and the sheep supply did not run out throughout the day.

Mr Brown's wife, Joyce, had also been heavily involved with the club. She is currently treasurer and she also ran the cookshop for many years.

The Browns, who operate the Locharburn Hereford stud, have sponsored a new event this year - a teams event, with a minimum of two members from one club, using a minimum of three dogs - with $1000 prize money.

As well as the serious business of competition, the social element of dog trials was also important and there had been many ''good natured high jinks'', as Mr Davis eloquently put it.

Charlie Perriam operated Charlie's Bar from its establishment in 1962 until he became too elderly to run it.

''`Haven't you b******* got a home to go to?' was what we used to hear at two in the morning,'' Mr Morton recalled.
There were many tales of funny incidents, including the night there was an ''almighty noise'' coming up the road, along with a shower of sparks.

After the final run on the zig-zag hunt course, an old hut was being towed up the road behind a ute. Young Farmers members used to have a lot of fun when they were liberating and consumed a lot of refreshments.

Some of them probably would not have won the hearts of the competitors by the end of the day, Mr Morton said.

One of the reasons for instigating Charlie's Bar was the problem with many competitors disappearing during the heat of the day, to seek shade under willow trees - or at the pub.

When the sun started to drop away, then 30 or 40 competitors could turn up, looking for a run.

• To mark the centenary, special one-off trophies will be presented and local school children are encouraged to attend the trials on Friday.

A dinner will be held at The Moorings on Saturday night. Mr Morton asked people travelling on State Highway 6 to respect the fact there might be dogs around and to take care.