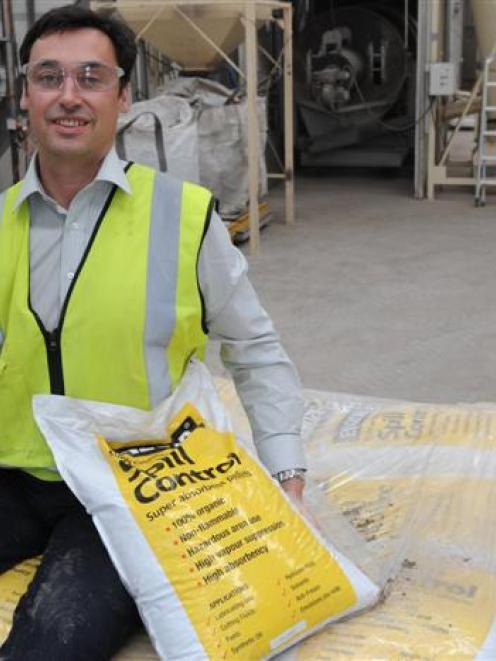 Adveco general manager New Zealand Andrew Protheroe with a lump of raw material and some bagged product in the processing plant at Mosgiel. Photo by Craig Baxter.
A shipment of fertiliser manufactured in Mosgiel from raw materials mined in Otago and recently dispatched to China has been hailed as having ''huge potential'' for future export opportunities.

Mining company Featherston Resources Ltd, which has more than 3000sq km of permits in Otago, produces carbon and silica based fertilisers and Enzorb spill control products.

The company, which markets its products under the Adveco brand, has been developing a suite of hybrid fertilisers.

While unable to disclose how much fertiliser was dispatched from Port Otago last month, Mr Protheroe said the Chinese hybrid rice industry was particularly interested in the fertiliser for use with its crops.

The ability to produce much larger rice yields allowed China to feed a growing population and also to sell rice overseas. Adveco products had undergone trials in China over the past five years and the inaugural shipment would be used to prove that work. There was also interest from India and Indonesia, which was promising, Mr Protheroe said.

The products were already used in New Zealand and exported to Australia, so the development of those additional three markets was the next phase of growth for the business.

The fertilisers were based on black diatomite, a chalk-like, soft, fine-grained, siliceous sedimentary rock which is high in silica and carbon.

It was mined in Otago and then taken to the processing plant on Dukes Rd which was completed in 2011 at a cost of nearly $1 million.

Featherston Resources was keen to develop products locally rather than just exporting raw material and the spill-control and kitty litter products had been a ''great success'', he said.

The Australian kitty litter market alone was believed to be more than 10,000 tonnes per annum and the worldwide trend was on the increase, due to urbanisation.

There was continued growth in using the product for industrial spill control and he believed the fact it was inert, organic and non-toxic was of growing importance to fuel and lubrication companies around the world.