Award-winner learning as much as he can 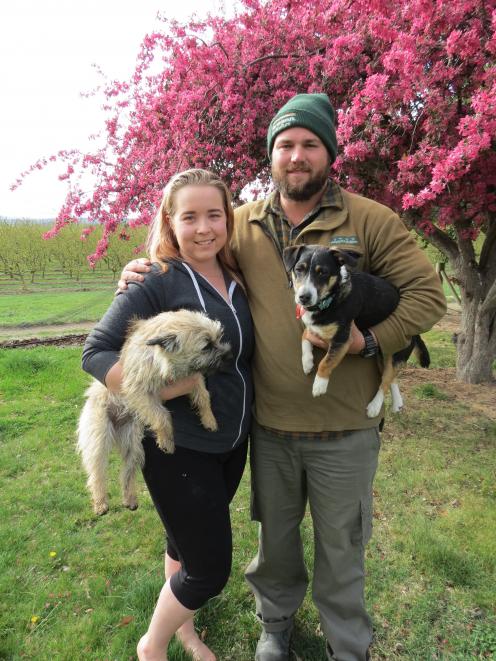 Mr Bottriell (27), who is married to Jordan, was described during the presentation as a ''fantastic role model, with enthusiasm and an excellent work ethic''.

He works for Howie and Sarah Hinton and although he is not doing a formal apprenticeship, the Hintons are teaching him the skills necessary to work as a supervisor on their three orchards.

In addition, he is studying for a certificate in horticulture through the Otago Polytechnic Central Otago campus online and hopes to continue on to a degree.

'The Hintons teach me, and then let me learn from my own mistakes,'' Mr Bottriell said.

The Hintons own three orchards on 280ha.

''We used to do apples and pears but our main focus is now apricots and cherries and, later, nectarines and peaches,'' he said.

''We export our cherries and apricots, but sell the nectarines locally.''

He and his parents and their two dogs (which cost more than the humans to send to New Zealand) arrived from South Africa about six years ago.

His father worked at a sugar plant in South Africa, and his parents decided to emigrate to New Zealand because of the crime and land claims in the republic.

''I wasn't on board with that, as I was young and stupid and did not think about it.

''Dad came to me and said 'here is the money for the ticket', and I then thought it might be nice to go, and have never looked back.''

He has been with the Hinton family for about two years and has learned to do almost everything associated with running an orchard, even a little bit of marketing, which he enjoyed.

He also works alongside the tourists who pick fruit in the summer, and with the Vanuatuans who work on the orchard.

His father had told him: ''You can't tell someone to do something, and then leave them - you have to get involved''.

''We get some really interesting people here.''

He enjoys his study, although finding time to do it can be difficult in the busy season.

''The polytech is really good and don't contact me when they know I am busy.''

He enjoys his work and is pleased he made the decision to come to New Zealand.

However, he does not think he would like to own his own orchard, preferring instead to continue to learn and take on management roles in the future.

When not working he enjoys fishing with his father and spending time with friends and family, which to him are most important.

He also likes to walk and explore Central Otago and can always find time to go to the beach.

The Hinton family won Countdown's Produce Supplier of the Year award at a formal dinner on August 30.