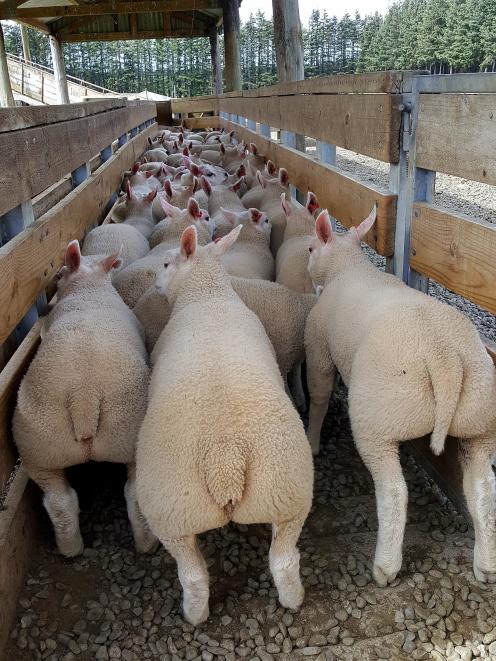 Seven-week-old lambs at the Gallagher family's farm Rangiatea in Mid Canterbury. Photo: Supplied
The Beltex sheep breed will be under the spotlight at a field day in Canterbury tomorrow.

Among the farms visited will be the Gallagher family's property Rangiatea at Mt Somers to look at the Beltex breed and the lambing system used.

About 12 years ago, Mr Gallagher contacted Dr Allison, knowing his extensive background in importing sheep, and expressed interest in the Beltex breed.

Dr Allison pointed out that the East Friesian breed, which he was responsible for importing, had cost $2million by the time they were out of quarantine.

Texels were in quarantine for five years and East Friesians for three years, which was a fair stretch economically, he said.

But later changes in regulations meant that embryos could be brought from Europe and the UK without quarantine.

Dr Allison said the World Organisation for Animal Health (OIE), on the back of a lot of research work, had decreed scrapie could not be transferred via embryos or semen, opening up the opportunity to import embryos or semen for breeding.

The change in regulations had taken a long time to ``wind its way'' through the Ministry for Primary Industries.

There was a ``bit of a push'' that was also due to increasing interest in sheep milking in New Zealand, particularly the lacaune milking sheep from France.

Beltex had higher meat yield, a higher killing-out percentage and, in the UK, Beltex-crosses were preferred by butchers and brought premiums, Dr Allison said.

Many of the Beltex and Beltex-cross carcasses were also in demand for export in whole carcass form directly to EU markets.

The breed had characteristics that were not in New Zealand and that had always been his philosophy in terms of offering opportunities to the New Zealand industry, he said.

Dr Allison met Mr Gallagher when they were heading to the Sheep Industry Awards in Masterton last year and they decided to have a look at Beltex.

In August last year, Dr Allison and his wife Hilary went to the UK and had a good look around, making arrangements to import some embryos.

There were 180 embryos brought in although there was a ``very disappointing'' take of 37%.

Semen was also brought in and used over Poll Dorsets, Suffolks and Perendales.

Arrangements had been made to import more this year and Dr Allison believed there were real opportunities with the breed. Already there had been a lot of interest, he said.

As far as lambing ease, Dr Allison said there were no issues when the Beltex was mated to another breed. There was ``going to be a bit of work to do'' in purebreds.