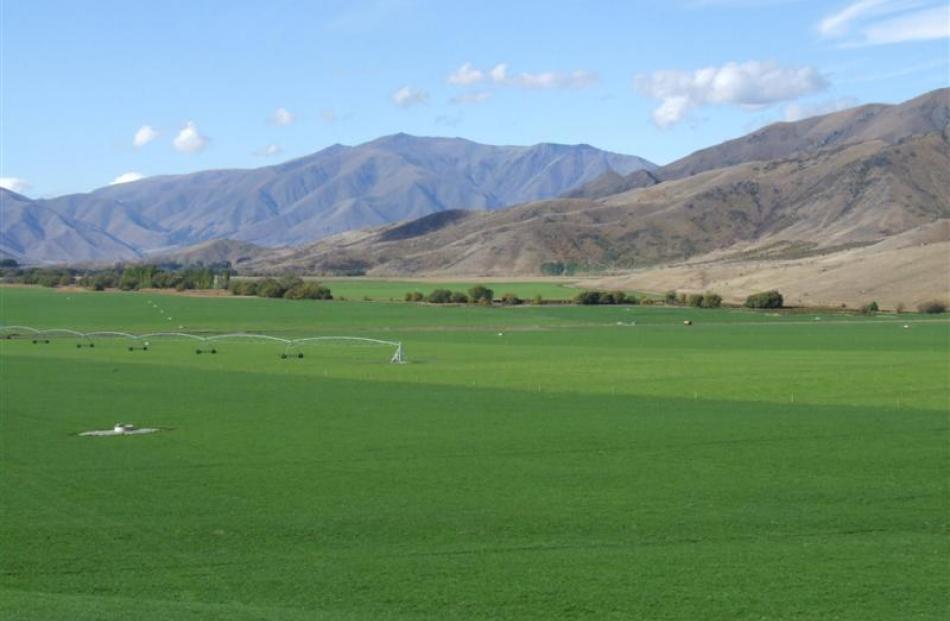 The irrigated flats at Tara Hills make a stark contrast to the surrounding brown hills near Omarama. Photos by Sally Rae. 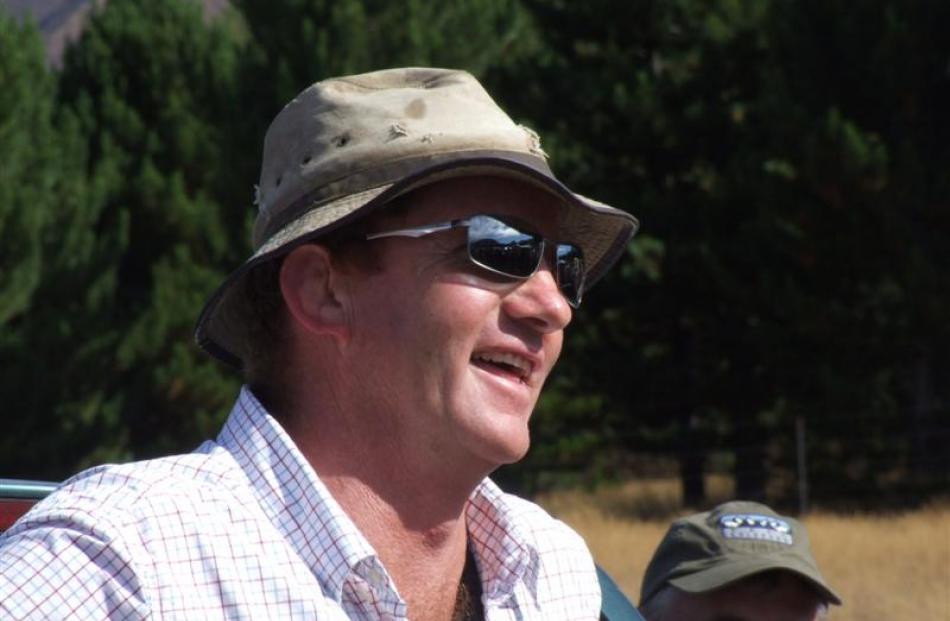 It was a fitting location for such an event, with what could be dubbed the ''green versus brown'' debate a very hot issue in both the upper Waitaki and neighbouring Mackenzie districts.

Starting in Twizel, about 140 people travelled in a convoy of vehicles through Doug McIntyre's dairy farm operation, on to Ohau Downs, where Kees Zeestraten is battling to bring irrigation to his property, then through Ribbonwood Station and into the Ahuriri Valley before viewing irrigation development at Tara Hills near Omarama.

North Otago Federated Farmers high country chairman Simon Williamson described it as a far cry from the ''barren, rabbit-filled desert'' the properties once were.

There had been an enormous amount of work done to transform some of that barren land into productive pastures and irrigation had been a fundamental part of that transformation.

In an opening address, Federated Farmers national vice-president Dr William Rolleston said there had been ''quite a swing'' in how both Federated Farmers and farmers in general were trying to deal with the issue of long-term sustainability , moving from a combative approach to one that was far more collaborative.

Farmers lived in areas like the upper Waitaki and Mackenzie because ''you value the values the rest of New Zealand values''.

They did not want to live somewhere where there were polluted streams and degraded countryside, Dr Rolleston said.

Looking at goals people were trying to achieve, 80% of those goals were actually the same - it was the 20% that were being argued about.

Dr Rolleston was disappointed with the lack of representation from Forest and Bird at the field day, saying there should have been ''a whole heap of people'' from the organisation present to see the effort farmers were making.

Barry Hanson, partnerships director for the Department of Conservation in the southern and eastern South Island, said Doc and farmers were responsible for New Zealand's high country, which was the ''envy of New Zealand and the world''.

An opportunity existed for Doc and the high country community to get more aligned, which would be a ''massive positive'', for the economy and environment, and the communities that depended on both.

Working together in a collaborative approach was ''really a no-brainer''. A partnership approach was much more rewarding, satisfying and fun and when there was a shift in mindset to working with people, good things started to happen, Mr Hanson said.

Mr Williamson said a fundamental change in the mindset of Doc had ''certainly started'' and farmers looked forward to working with Doc.

''It's a reminder how lucky we are in New Zealand to live in such a wonderful country,'' she said.

She was ''blown away'' by what farmers were managing.

They were running some of the biggest businesses in the country ''and you don't see it'', she said.

Dame Margaret was conscious there were concerns throughout the region about aspects of the Land and Water Plan.

Farmers were wanting to expand agriculture, there were concerns for the economy and concerns for ''feeding the world'', while on the other side there were environmentalists.

In talking to farmers, along with Forest and Bird, Fish and Game and other environmental and recreational groups, a movement in attitudes was evident, she said.

''You have to get around the table with them, sort things out, get a middle road, because otherwise it will be forever in the hands of courts,'' Dame Margaret said.

Ecan was there to work with farmers to grow the country's economy through farming carried out in an environmentally sustainable way, she said.

''Every Kiwi thinks they have part ownership of it, which is part of your problem. It is also hopefully part of your solution,'' he said.

From a dairy farm on the West Coast, Mr O'Connor recalled driving through the upper Waitaki and seeing the dairy development on the flats and thinking ''what bloody idiot is going dairy farming here?''''Today has helped me get through that,'' he said, after the tour.

He recognised the economic driver for converting to dairying, saying given the absence of a viable meat industry ''everyone who can is going dairying, because that's where the money is''.

From an economic perspective, that was ''bloody dangerous''. But the reality dairy farmers were getting 10 times the return of drystock farmers could not be denied.

The meat industry needed to be ''sorted out'' and something needed to be done with fine wool because it was ''faltering''.

When it came to the dairy industry, ''where it goes and where it stops'' was the big question.

''You here are at the cutting edge of the single biggest question facing New Zealand at the moment.''

There was almost total dependence for growth on the dairy industry and on China.

''So if we get it wrong or a biosecurity incursion happens, we're a one-trick pony at the moment,'' Mr O'Connor said.

''The big thing that we can take away from [the field day] is that we are incredible innovators and we are achieving great things.

''New Zealand's high country farmers are made of strong stuff and it has by no means been an easy road but it just proves how resilient we truly are,'' he said.