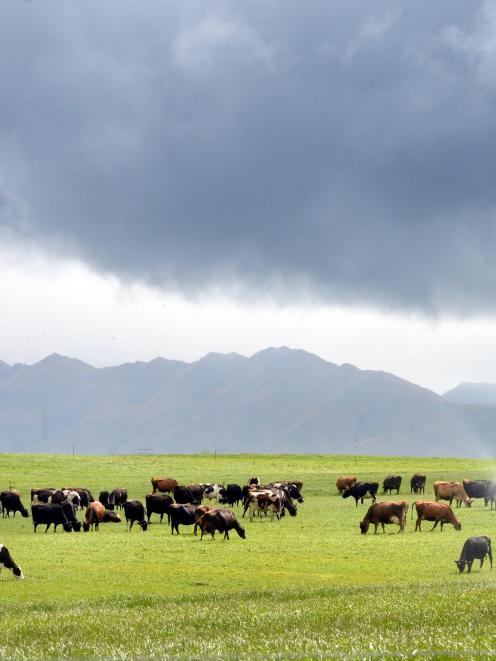 Lower milk production and lack of feed could create dire financial conditions for farmers. Photo by Stephen Jaquiery.
Dairy production is likely to slow below previous forecasts as parts of Canterbury and Otago dry off and water restrictions kick in, ASB rural economist Nathan Penny says.

''As we get further into the New Zealand summer, attention is turning to agricultural production. In the case of dairy, production has been good to date this season - albeit uneven across the regions.''

Fonterra had reported production growth was up 3.8% for the season to December, while season to October growth for all processors was 5.8%, he said.

At present, production was holding up in the North Island but less so in the South Island.

The risk was dry conditions in the south developing into a drought.

There was also a 50% probability of below-normal soil moisture in coastal Canterbury and East Otago.

All other regions had a probability of 34% to 45% of below-normal soil moisture over the period.

Given the latest predictions, ASB had revised down its nationwide dairy production forecast for the season to 1.5% growth, from 3% previously, he said.

The 1.5% equated to zero for Fonterra. Fonterra collections had been slower than for other processors this season.

''While it's still early days this summer, the developing dry combined with the low milk price mean the risks are to the down side of this production forecast,'' Mr Penny said.

''Synlait is not seeing a drop in milk production, which remains at budgeted levels.''

Without rain over the next couple of weeks, it seemed inevitable large parts of the South Island would become drought zones.

''We're hearing some areas south of Timaru have had less than 100ml of rain since June. It is so dry some stock are being fed grain on dirt, with no feed in sight.''

The rivers were running low, with some areas running out of stock water, and farmers were starting to feed out supplementary feed.

Dryland farmers had dried off some cows and were looking to fully dry off if there was no rain within the next month or two, he said.

That would create potentially dire financial effects as stock conditions took a hit.

If significant rain did not arrive, there could be a shortage of winter feed, with dryland crop yields around South Canterbury significantly back on other years, Mr Stead said.

In many cases, winter feed crops sown late had not struck.

Any feed shortage would push the price of feed up, which, under current circumstances, was a concern for many farmers.

Mr Stead urged farmers to keep in contact with their bank and other professionals so they could plan for the coming months.

''We've already spoken to a number of our customers and we would urge any other affected farmers to get in touch so we can work out the best solution for the circumstances,'' he said.