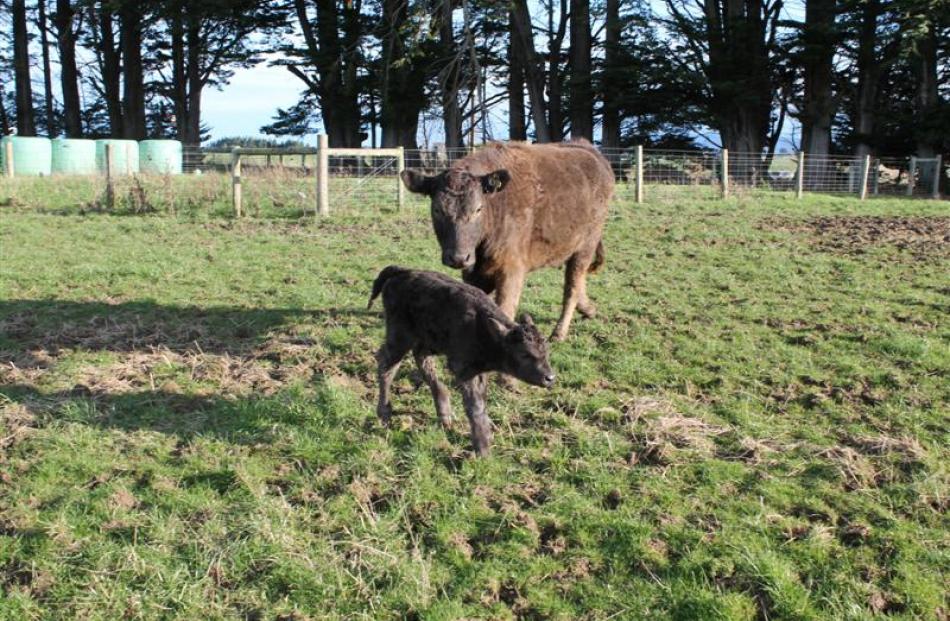 The heifer calf born last week is believed to be Bobo the bison's first offspring. 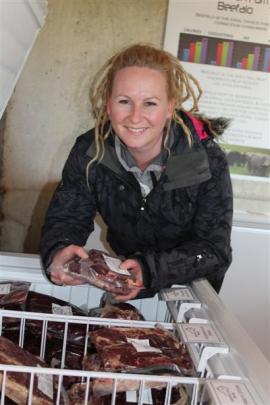 Nadia Wisely with beefalo packs from the on farm shop. 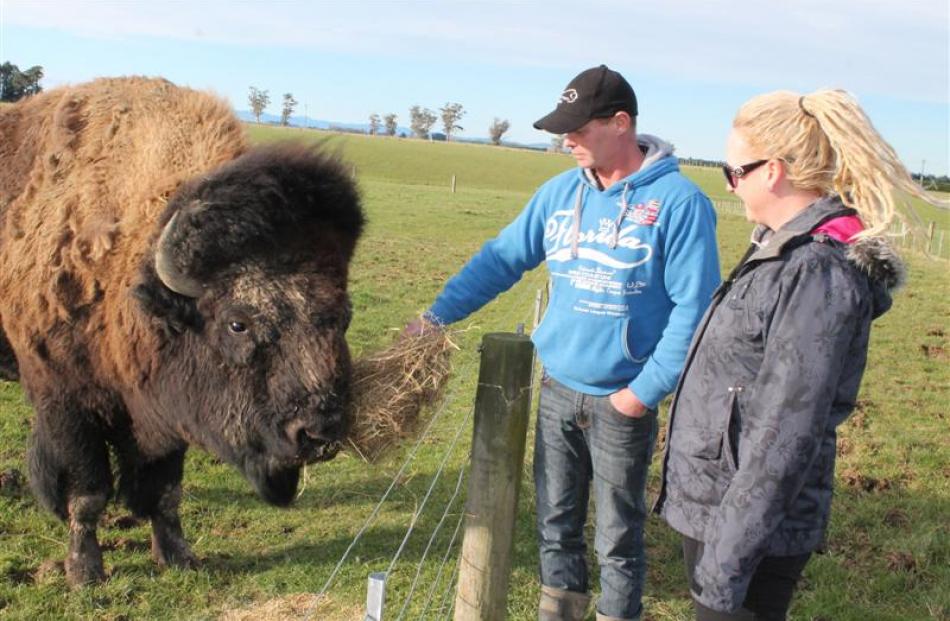 Bobo the bison with his owners Blair and Nadia Wisely on their farm at Fairfax, near Invercargill. Photo by Allison Beckham.

What do you get when you cross a bison bull with a beef cow? Beefalo.

And a brand new beefalo arrival on Blair and Nadia Wisely's Southland farm earlier this month is expected to be the start of an all local beefalo blood line.

Despite his unmasculine name, Bobo the bison - the 6 year old shaggy beast weighing 900kg the Wiselys have owned for four years - appears to have proved his parental prowess at last, successfully mating with a 50 50 bison/Charolais cow produced using bison semen imported from the United States.

It will require DNA testing to prove the heifer is Bobo's, but because of the timing of her arrival - in the depths of winter at least a month before the rest of the calves on the farm are due - they said they were ''99% sure''.

The calf is a similar rich brown colour to Bobo and looks to have the longer bison hair.

If the tests prove her parentage, the calf would be 67% bison, Mr Wisely said.

With any luck, another five Bobo babies will arrive over the next three weeks - good news for the young farmers who are trying to build up their niche beefalo meat brand from their Netherton Farms property at Fairfax, about 20km west of Invercargill.

Being genetically different, bison and cattle did not naturally interbreed, Mr Wisely said.

But bison can be successfully mated with bison beef cows which are the product of artificial insemination and they already have 35 beefalo animals on their farm bred from two different lines of imported semen.

Beefalo is already produced in significant quantities in the United States but the Wiselys believe they are the only farmers producing it in this country.

They said beefalo was nutritionally better than beef and pork because it was leaner and higher in protein. A research study completed by Central Washington University scientists in the 1990s also showed it was the only red meat able to lower cholesterol, Mrs Wisely said.

Their animals are killed at the Prime Range Meats plant in Invercargill and processed into cuts at the Isla Bank Butchery.

While their beefalo marketing was in its infancy, Mrs Wisely said casserole and braising cuts were already being sold to Lumsden's Bafe Bakery to be made into pies, while chefs at two Invercargill outlets - Jagz in Windsor and the Northern Tavern - had beefalo burgers and/or steaks on their menus.

The Wiselys have converted an old grain store on their farm into a shop selling frozen beefalo packs, including steaks, mince and gourmet sausages, to the public.

Bobo is a descendant of either the eight animals given to New Zealand in 1904 by US President Teddy Roosevelt or one of the small number of bison imported later for zoos and wildlife parks.

He was born on the rare breed farm near Blenheim owned by Dr Bob Blake and his wife Sue, Alaskan immigrants who in 2004 began buying or acquiring bison from around New Zealand and creating a breeding herd.

Mr Wisely decided he wanted a bison when a friend in the North Island bought six about five years ago.

Which was handy, because although bison in the wild could run at 60kmh and keep it up for several days Bobo tended to ''amble'', and while they could jump standard farm fences, Bobo did not seem aware of that.

The Wiselys said Bobo was a tourist attraction with Southlanders in the know and they had recently hosted their first tour group, introducing them to Bobo and the on farm shop before barbecuing up some beefalo meat for the visitors to sample.