Bog Roy story one of challenges down through generations 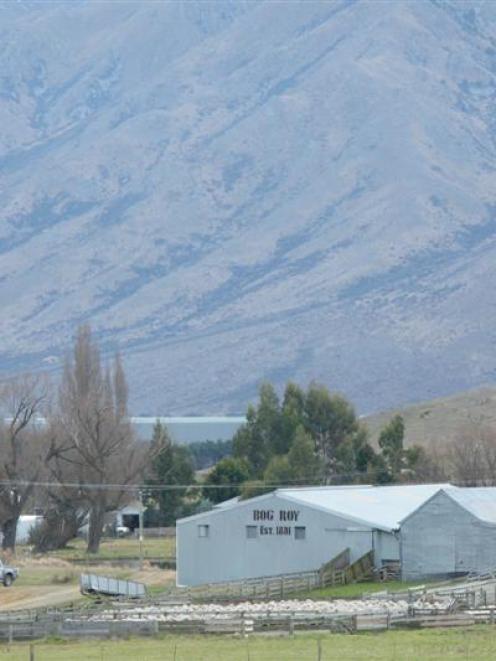 John Anderson was the first Anderson to farm Bog Roy (pictured), near Omarama, taking up the lease in 1919. Photo by Ruth Grundy.
It is fair to say farming Bog Roy station has put each generation of Anderson family to the test.

It is also true to say their dogged determination to face down the challenges thrown at them is testament to their love and vision for the land.

Dave Anderson is the fourth Anderson generation to take on the high country run.

It's his and his wife Lisa's hope their children, Pippa (4) and Robbie (2), will one day take their turn as managers and guardians of the ''unique piece of dirt'' successive generations of Andersons have called home.

''It's unique, looking after this piece of dirt - it's pretty amazing,'' Mrs Anderson said.

''To be out following a healthy mob ... on good, hill country pasture - it's pretty good,'' Mr Anderson said.

It was a cliche but the couple saw themselves as ''caretakers'' rather than ''owners'', he said.

As such it was their role to ''grow enough fat in the business'' to sustain the family into the future, he said.

The first Anderson to farm Bog Roy was Dave Anderson's great-grandfather John, who took up the lease in 1919.

It was established in 1891, carved off as one of six leases from Otematata Station.

The early days were hard, punctuated by what historians called the great floods, the great snows and the great droughts, events which wiped out stock in the tens of thousands.

Rabbit numbers exploded and they overran the country, decimating pasture and ruining many farmers.

But the Andersons have also had to brace themselves against the brisk and cutting winds of change which repeatedly sweep south from the capital.

While the 2860ha dry-land property has always sloped from steep, dry hills, through rolling country and down into flatter land, in the early 1960s, its wide, fertile river basin was requisitioned and filled to become part of New Zealand's largest man-made lake - Lake Benmore.

It was snow and rabbits which drove farmers to the edge in his great-grandfather and grandfather's time, but in latter years it had been battles with bureaucracy which had pushed the family to the brink, Mr Anderson said.

Once the gates on Benmore Dam were lowered, about 1200ha of good silt-wash land shared by Bog Roy and Peak Valley went under the lake.

The two stations, separated by a swing bridge across the Ahuriri River, had been farmed together as a traditional high country run.

''The raising of the lake took the balance away from the country,'' he said.

He was told of ''very heated'' arguments with officialdom over giving up that land. 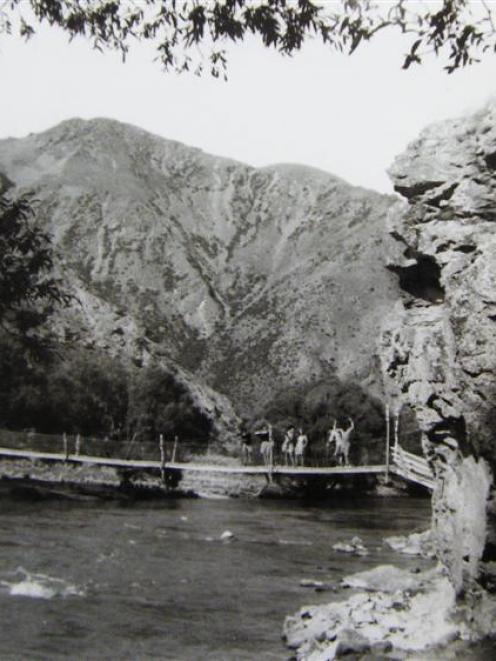 Bog Roy and Peak Valley stations were joined by a swing bridge across the Ahuriri River valley, which was flooded when Lake Benmore was raised. Photo supplied.
It didn't help the family's case that the pastoral lease was up for renewal, he said.

The family was given land from Otematata Station as compensation but the writing was on the wall - Peak Valley could no longer be used as a viable part of the operation.

It left his grandfather, Duncan, war-weary.

When Mr Anderson's grandfather died, his father, Ken (KJ), and mother, Susie, who had farmed Peak Valley, and the family - Liz, Jen and himself - moved to Bog Roy.

KJ was a farmer first and foremost but ''all roads lead to politics'' and he was driven to advocate for his rural community, Mr Anderson said.

Rabbits were still the scourge of high country farmers.

''People did walk off their land.

''The trade-off is it is good stock-health country but it means good rabbits as well.''

The massive task of eradication drew KJ on to the local pest board, then the amalgamated pest boards, which he chaired, and subsequently to the national council.

Under the rabbit boards numbers were brought to manageable levels, but when a change in structure was proposed KJ had serious fears the rabbits would come back, he said.

''He fought to keep it the same because `the same' was working.

''He was worried charges would skyrocket and he was staunch; every dollar possible should be spent on killing rabbits, not on administration.''

In the end it took the illegal introduction of the rabbit-killing virus RHD in 1997 before farmers were able to get on top of the problem.

In 1989, officials, once again in change-management mode, this time to reorganise local government, redrew the map.

Bog Roy (along with most of the Waitaki Valley) was netted for Canterbury from Otago - KJ was one of five ratepayers who tried unsuccessfully to get the decision reversed.

Joining the new Environment Canterbury (ECan) region was to determine how the process for the renewal of its water rights played out.

Mr Anderson went into partnership with his parents in 1997.

In 2005 the couple married and took over Bog Roy to farm in their own right.

However, another government initiative was to disrupt their plans.

In other words, it wanted to up Bog Roy's rent to $56,000 annually because of its lakeside location, Mr Anderson said.

The irony was possibly lost on the pen-pushers.

As well, the tenure review process, where land is taken from the leases for the conservation estate and swapped for freehold land, was well under way throughout the high country.

''You turn around and they smack you again.''

The process was divisive and harsh words were traded.

Mrs Anderson remembers attending a gathering of farmers on the night of the 2008 general election, as it became clear National would win, and seeing grown men become quite emotional with relief and hope the Labour policies would be brought to a halt.

The Andersons are happy with the outcome of tenure review but looking back the process left them feeling ''really squeezed'' and as if they had tried to ''swindle the country'', she said.

This, the lengthy negotiations around farm succession and the renewal of water rights, plus a drought, brought the couple ''quite a lot of pain'' for a while, Mr Anderson said.

They reached out for help and got advice from older farmers, scientists and advisers, and they credit this with seeing them through.

''It's hard not to take things personally, not to feel a failure somehow,'' Mr Anderson said.

The ''casualty'' of farm succession can be families who ''tear each other apart''.

A high capital value might appear on a balance sheet and understandably everybody wants their fair share, but ''you only get that if you sell it''.

Farms no longer automatically passed to the eldest son and it was possible to put in alternative structures, suited to individual families, to manage farm succession, he said.

These matters were now under their belt but the renewal of Bog Roy's water rights looked set to continue into the future, ''bleeding money'' as it went.

It was unlucky that when the time came to renew their water rights it coincided with the bid from new applicants to get water to set up large-scale dairy farming in the Mackenzie and Ohau Basins, he said.

After protracted negotiations an agreement to renew was made in 2010, but it has yet to be signed off, four years and $160,000 later.

''That's one of the biggest challenges.''

At one point during dealings Mr and Mrs Anderson were the only two in the room who were not lawyers and having to negotiate with ''trained professionals''.

It has made them determined to see their children well-equipped and educated for this new farming future bound in red tape ''so they can represent themselves'', Mr Anderson said.

''[It's about] putting your case forward. If that's not your thing, if you're not au fait with it, it can really cost you,'' Mr Anderson said.