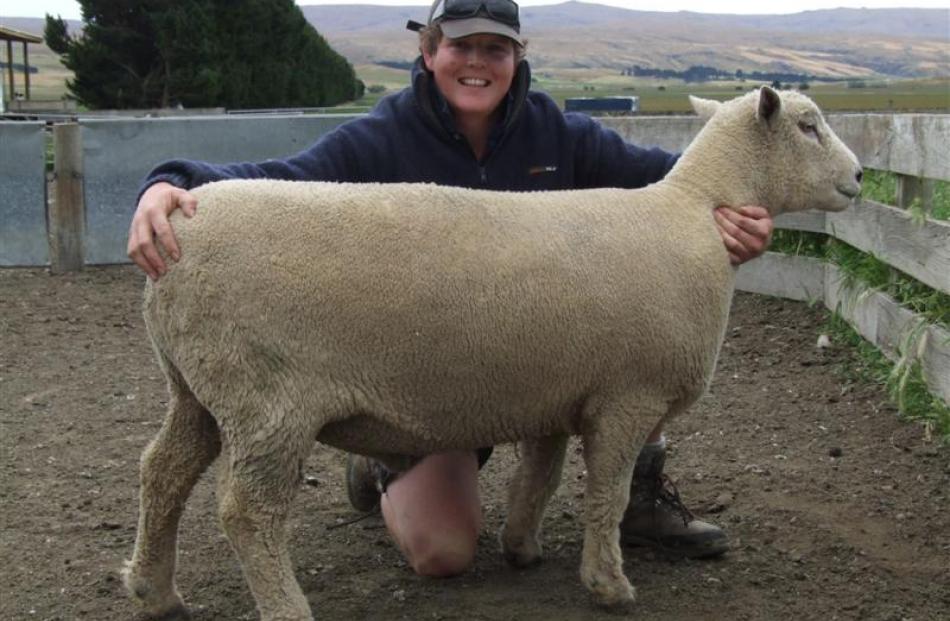 When Duncan Elliot was a young boy, all he wanted was a shearing hand-piece.

Forget the PlayStation games and other electronic gizmos that his contemporaries desired, he was firmly focused on farming.

Now 16, Duncan, from Lammermoor Station, Paerau, in the south of the Maniototo, started crutching when he was 10 and began shearing his own sheep last year. He, his elder brother Lachlan (20) and sister Brooke (22) have inherited a family passion for the land, and for purebred sheep.

The Elliot family has been on Lammermoor Station since the 1920s and the 5200ha property is now farmed by John and Susan Elliot with their children.

Duncan, who has a Romney stud, and Lachlan, who has a Southdown stud, both with the Lammermoor prefix, were now third-generation stud breeders on both sides of their family.

It had always been an interest for the pair and while it was a passion, it was also very much a business.

Lachlan and Duncan began selling their current crop of rams last week, preferring to sell privately rather than at auction. Both breeds were also used over some of the halfbred and merino ewes on the station.

The Paerau area was known for its very harsh winters, with plenty of frosts and snow, and hot, dry Central Otago summers. It was a testing environment for sheep, which shifted well out of the district, they said.

Asked whether there was any sibling rivalry, Lachlan diplomatically explained there was ''always brotherly competition''.

''But then we both agree a Southdown across a Romney is a bloody good lamb,'' he said.

The Southdown is the oldest of the terminal sire breeds in the UK and originated from the native sheep which roamed the South Downs in the south of England for hundreds of years. It was developed into a fixed type in the 18th century.

The first Southdown stud flock in New Zealand was founded in 1863 and the Southdown Society was formed in 1926.

The opportunity to own one of the few Southdown studs in the area was a drawcard for Lachlan, who was also attracted to the breed by it being a good early-lambing sheep, with an ability to finish quickly.

He was looking to sell about 80 rams a year but hoped in the future to build that up to 140 as he continued to increase ewe numbers, while not compromising quality.

He was trying to breed good, structurally sound, well-muscled sheep with the ability to ''get lambs away straight from mum'', but with the frame and length to be able to grow them out to a 21kg-23kg lamb later on.

Lachlan, who has sold rams as far afield as Canterbury and Southland and throughout the Maniototo, said his goal was to breed good, commercial rams for farmers.

He recently returned from a year-long stint overseas, spending time working on a farm in East Sussex, near where the Southdown breed originated. Their New Zealand counterparts were much bigger and with a lot more length to them, he said.

Farming in general in the UK was very different from New Zealand, and he reckoned the UK livestock farming systems were ''probably 50 years'' behind those in New Zealand.

Handling stock was not easy; there were no sheep-handling facilities like sheep yards or shearing sheds, and moving stock was also an issue. Traditional breeds were still very much at the forefront, he said.

Duncan's foray into stud breeding began in 2007, with the purchase of nine Romney ewes from Ron Jones, of Matarae Station, near Middlemarch, and about a dozen from Mr Mulholland. He now had about 100 breeding ewes, most of which were home-bred.

He was enthusiastic about his recent purchase of two rams from Blair and Sally Robertson's Merrydowns stud at Waikoikoi, which included the top-priced lot of $3200 at the Robertsons' annual sale last month.

Those acquisitions would bring different genetics, more meat and good wool to his flock, he said.

When it came to breeding, Duncan was focused on fertility, wool, meat production, conformation and maternal ability.

He admitted he was particularly passionate about wool, which was something of a family tradition.

Lammermoor Station has long been renowned for the ultrafine merino wool it produces.

Lammermoor wool, including Romney fleece - John and Susan Elliot used to have a Romney stud - has won many Otago and local fleece competitions, along with national Golden Fleece awards.

Duncan has already experienced success in fleece competitions, including being runner-up in the crossbred section of the Golden Fleece.

This year, he was selling about 30 rams and hoped to raise the number of rams available for sale.

At the same time, he wanted to ''keep the quality up, and the wool and have meat in the right places''. He aimed to produce as even a line of rams as possible.

Both Lachlan and Duncan were involved in all aspects of stud breeding, from looking after their client base to keeping up the paperwork.

Duncan reckoned having his own stud had taught him a lot about sheep. Attending other ram sales and viewing other breeders' sheep proved useful for comparison..

A boarder at John McGlashan College, Dunedin, he headed home most weekends. Lambing was timed to coincide with holidays.

Several years ago, his ewes were lambing in 30cm of snow, yet the lambs were quickly up and about.

''They're good lambers, good mothers. The lambs are born and they run.''

Once he left school, he hoped to initially either work on farms in Australia or head to Canada to be a hunting guide.

While the brothers had never been forced into stud breeding, or farming, their mother was delighted they had the interest, particularly at such a young age, and such an understanding of livestock.

Asked about the future of the sheep industry, Lachlan said it needed ''a bit of a shake-up'' and he believed farmers needed to ''stick together''. Duncan reckoned farmers should ''get the basics right and stick with traditional breeds''.