Busy winter ahead for contestant 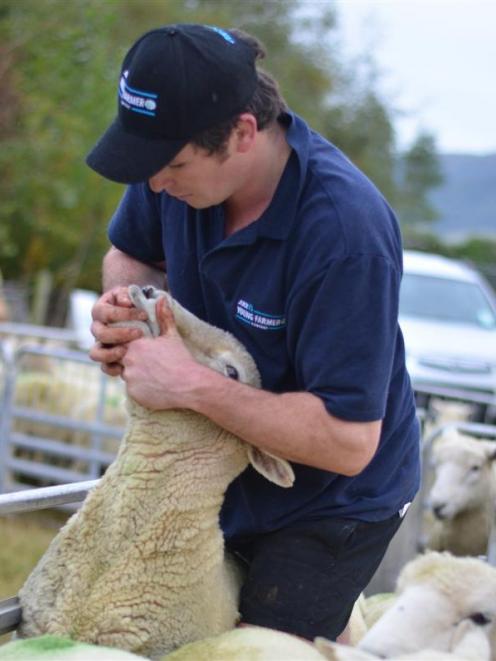 Mr Rabbidge (28), a member of the Wyndham Young Farmers Club, is Otago-Southland's representative in the grand final of the ANZ Young Farmer Contest in Christchurch on July 3-5.

He and his wife Sarah are also expecting the arrival of their first child on June 18.

''It's just going to be busy enough this winter,'' he quipped.

Last year, he finished fifth in the grand final in Auckland. The competition was won by Tim Van de Molen, from Waikato-Bay of Plenty.

Brought up on a sheep and beef farm at Glenham - a property that has been in the family for more than 120 years and he is now the fifth generation to farm it - Mr Rabbidge graduated with a bachelor of commerce degree in agriculture from Lincoln University.

Following a stint overseas and then work as a technical field representative, he returned to the home farm three years ago.

Part of the farm was converted to a dairy unit, which he now manages. Mr Rabbidge admitted he was ''getting there slowly'' with his grand final preparation.

''It's pretty hard to find time when you're farming fulltime and there's a few other things thrown into the mix ... rugby and things like that.''

One advantage of being a previous grand finalist was he still had all the resources he collected last year, which saved some time when it came to studying.

He reckoned his wife could just about enter the competition now - ''she knows all the questions''.

A lot of preparation was done on farm without actually thinking about it.

He was more conscious of how he did things - ''how I ride the four-wheeler, get in and out of the tractor, reading the backs of labels a bit better'' - as it ''all adds up''.

He admitted he was relieved with the outcome of the regional final and the realisation dawned that this was his last chance ever to win the contest. Grand finalists were only allowed to compete twice.

He had the benefit of last year's experience - ''last year I was pretty apprehensive going into it, I didn't know what I was in for'' - and this time he hoped to enjoy it a bit more.

He also had a much longer period to prepare, as last year's regional final was held about this time last year and the grand final was in the second week of May, so he only had about a month to prepare.

Still, he expected it would come around quickly and he was at the stage he just wanted to ''rip into it''.

Mr Rabbidge was trying to work on ''everything'' and he was doing some off-farm courses in areas he found he needed more work on at the grand final last year.

His Young Farmers Club was also going to hold a few days to simulate the pressure situation and test his composure.

Mr Rabbidge believed there were no clear favourites for this year's grand final and everyone was in with a chance. Winning was now his goal. It was only the third year he had entered the contest and he recalled the first time, when he finished fifth in the regional final and was ''just absolutely livid'' with the result.

He was adamant that the next year he would do better and make the top four - and he ended up winning it.

He acknowledged that, ''deep down'', he was a competitive person.

''I don't like to compete for the participation certificate, put it that way,'' he said.

There had been a ''bit of a drought'' since then and he hoped to rectify it.

While he had ''huge support'' in Auckland last year, having the event in Christchurch would make it easier for supporters to travel to the event, he said.