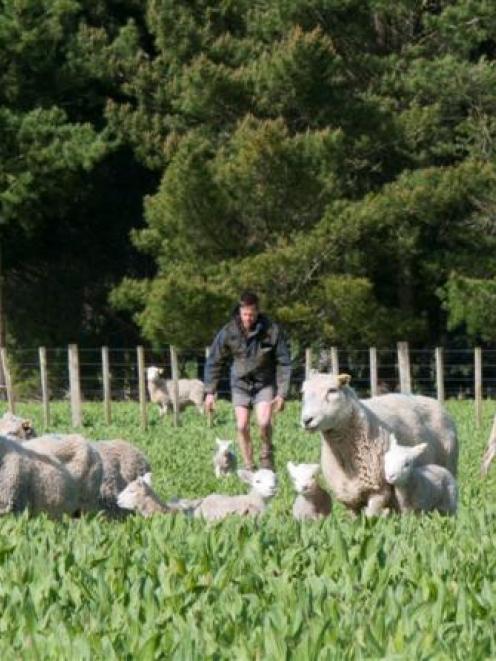 Photo by Beef and Lamb NZ.
The state of the red-meat industry was, not surprisingly, a major topic of conversation at Federated Farmers national conference in Ashburton last week.

A session entitled ''Culture Change: The New Beginning In The Meat Industry'' was a focus of the meat and fibre meeting, as agribusiness reporter Sally Rae reports.

Former PPCS chairman Reese Hart believes a merger between the co-operative (now Silver Fern Farms) and Alliance Group is not a priority.

''I simply think there are more important things to be done. I think the merger will happen some day but probably not for the reasons we wanted it to happen five years ago,'' Mr Hart told Federated Farmers meat and fibre meeting in Ashburton last week.

During the two years he was chairman, up until 2008, PPCS worked closely with Alliance Group.

''Of course we were interested in merging the two co-operatives but it was always going to be more than just that. We did want to include other companies as well.

''But the reform process was going to go further than that. Certainly as far as processing was concerned, there needed to be reform there and, while we were about it, we were going to have a look at marketing.

''We did not get the support from farmers to continue and the point I want to make is that time moves on and we've moved on, too.''

In a contracting industry, with too many players, some would take the option to exit, there would be takeovers and mergers and Silver Fern Farms and Alliance Group ''some time in the future may become one''.

Outlining some thoughts for the future of the industry and focusing ''on what's possible rather than the impossible'', he said farmers could not expect others to do all the work in reforming it.

''You're going to have to play your part. What's needed here, more than anything, is a collaborative approach involving three parties - the meat industry, you as farmers and the Government.''

The first stage was dealing with over-capacity which was a ''very necessary first step''.

''Companies simply need to be profitable and if they are not profitable, we all suffer,'' he said.

Mr Hart favoured transferable killing rights, which he said would largely be kept in-house so if a company wanted to close a plant, it would get the benefits of the stock flowing to its other plants.

The rights, which would be worked out on a killing quota, could be sold to another company if someone wanted to exit the industry.

He believed the Government would need to provide legislative assistance by bringing in a moratorium on building further killing capacity, which would have to last for about three years.

''The beauty of this proposal is it will allow rationalisation to get under way and that's what we haven't had to date.

''It will allow the transactions or the investments to be bankable, it will give certainty of supply and most importantly it will give options for investors to get out of the industry and I think long-term it will lower the number of people participating in the industry.''

Procurement needed to be an open and transparent process and he believed a code of conduct would be ''very useful'' for the industry.

While it would be voluntary, it would be an act of good faith for companies to build trust between farmers and the industry.

Companies needed to have freedom and flexibility in their pricing policies but there must not be ''special deals''.

''We don't want to see the situation ever again where you, as a loyal supplier, supply your company but your neighbour, who supplies the spot market, can, through a third party agent, get a better price supplying the company that you supply.

''Farmers have had enough of that and, to be fair to the companies, I think they are improving but there is room for further improvement yet.''

He believed the reduced kill presented opportunities to do something in marketing.

''Do we have to supply every major outlet in the UK? It might make more sense to become a bit selective so that the outlets we do supply can have our lamb as a point of difference.''

Mr Hart gave credit to those companies investing in brand marketing, saying it was a deliberate strategy that took time, investment and careful management to build brand recognition.