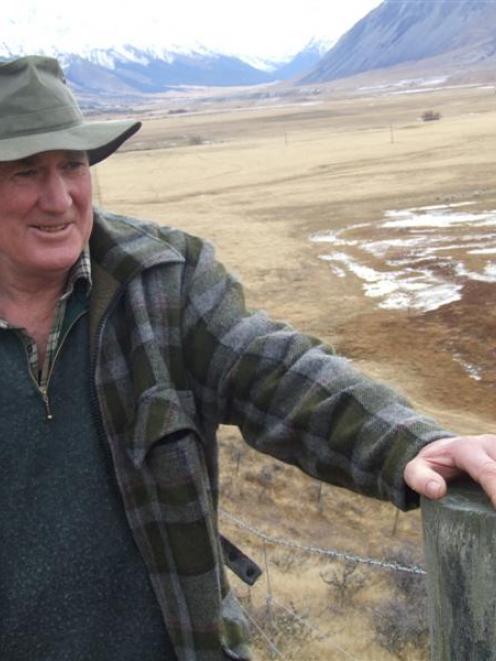 Jim Morris at home in the Ahuriri Valley. To the left is a wetland area he has fenced off for native planting. Photo by Sally Rae.
An ambitious high country carbon project is being investigated which, if it proves successful, those involved say could be the start of a new era for high country families, reports Sally Rae.

A chap in Borneo, having read about the money to be made in palm oil, heads out to cut down a patch of rainforest to plant palm oil trees.

He is just about to strike the first blow with his axe when the local regional council officer arrives and tells him he will get a carbon credit if he puts the axe away.

Some time later, the officer returns to visit the man and the two go for a walk in the rainforest.

They see orangutans have returned - so he gets an ecosystem credit.

Then a rare butterfly, which has not been seen for years, returns.

A stream which used to be muddy is now pristine.

The man gets more credits.

As Mr Morris, from Ben Avon Station in the Ahuriri Valley, near Omarama, says, the man in Borneo is now sustainable.

And he is "farming" the ecosystem.

The high country carbon project - the recent recipient of funding of $185,000 for two years from the Ministry of Agriculture and Forestry's Sustainable Farming Fund - was a project born from concerns Mr Morris had about the profitability of farming in the high country.

As he told a group of Federated Farmers High Country members recently, traditional stock farming was not paying the bills.

Another product was needed and the obvious choices were carbon and eco services trading.

For many farmers, the carbon tax they would have to pay in the future could be offset by plantings of exotic forestry.

However, that was not an option for many in the high country, where district plans forbade or severely curtailed such plantings on land designated as "outstanding landscapes".

A paper, written by 13 scientists, estimated that in 1997 the economic value of the world's ecosystem services averaged $US33 trillion, while the global gross national product was only $US18 trillion.

"In global economic terms, therefore, by protecting my patch of matagouri, I have achieved almost twice the value of ploughing it to grow grass for stock," Mr Morris said.

The project team's aim is to quantify what is happening in the carbon sequestration world with native scrublands, tussock grasslands and wetlands under different management regimes.

While it was already known that sequestration rates in natives tended to be low, the sheer size of the high country meant "an awful lot of carbon".

However, very little information existed on the amount of carbon stored in tussock grasslands or potential management actions to increase carbon storage.

The project would provide the necessary information for high country land managers to mitigate climate change and access new business opportunities while improving the sustainable use of landscape resources.

Mr Burrows, a plant ecologist, described the project as a "fantastic idea", saying it was quite innovative and forward-thinking.

The research needed to be done and was something that had been"bandied around".

In New Zealand, there was very little information on the topic, especially in relation to high country farming.

In time, it could have an effect on high country land use and the economic and social issues around the high country as well.

There was a long way to go but the funding from the Sustainable Farming Fund was a good start and would "kick things off", he said.

While the end result was unknown, if the research "comes up trumps", it could be the start of a new era for high country families, Mr Morris said.

"Their reliance on meat and wool for their only income and the vulnerability that comes with that position may become a thing of the past," he said.