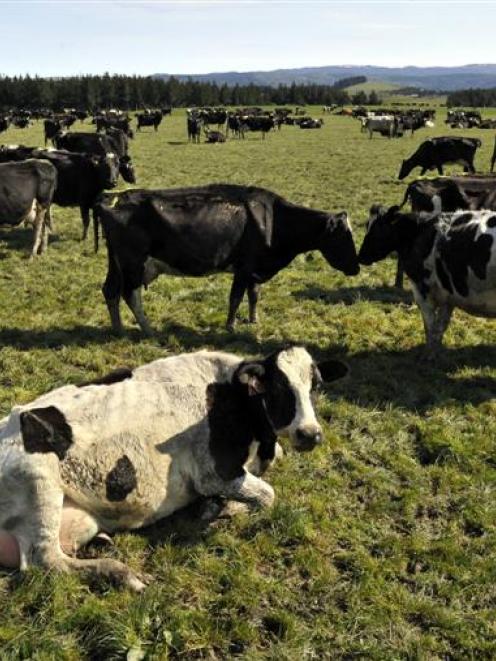 While TAF was working well and the strategy compelling, Fonterra was a turnaround story with earnings momentum elusive, despite sustained growth investment.

Volatility and elevated world dairy prices were conspiring against Fonterra and a lack of visibility in underlying earnings made forecasting difficult, he said.

''We also see further evolution in how Fonterra manages its relationship with farmers and the requirement for them to support a higher risk strategy in its early phases of implementation.''

The TAF mechanism was bedded down and working well. However, the benefits associated with Fonterra's strategy looked set to remain elusive until at least the 2015 financial year, Mr Easton said.

Earnings were expected to be ''challenged'' by ongoing high prices in 2014.

The volatility inherent in Fonterra's earnings, evident in the 2013 result, was not surprising due to the potential for mismatches between its key input costs and Fonterra's different production mix, he said.

''We believe Fonterra's strategy remains clear and compelling although the focus on shifting Fonterra's business composition further away from its area of genuine competitive advantage of New Zealand milk processing clearly has risks.''

Given the size of the NZ Milk Products business, Fonterra needed to implement with ''velocity'' if the strategy was to have a meaningful impact, Mr Easton said.

In the absence of improved operating performance, and depending on factors such as merger and acquisition activity, that would probably require further capital for growth, given farmers were clearly committed to retaining a strong balance sheet.

Farmers remained the core providers of capital to the co-operative given constraints around levels of outside investment and no desire evident to spin businesses off, he said.

Coming up to the one-year anniversary, there were no issues with the mechanics of TAF, although the use of the market mechanism to set the price had seen a significant increase in the costs to ''share up'' from $4.52 pre-TAF to between $7 to $8 for much of Fonterra's first year under TAF.

''While this is clearly pleasing for farmers, particularly those with mature farms or considering exit, it creates a different dynamic for those growing or entering the co-op.''

Fonterra had made some early moves following TAF, including a bonus issue and growth contracts, to alleviate pressure on farmers facing a sudden increase in the cost of buying shares. But without a change to the share standard, Mr Easton expected Fonterra to focus over the next 12 months on additional ways it could support farmer growth and ensure its farmer base remained engaged and supportive of the growth strategy.

The co-op also needed to ensure its farmer base was better informed about the benefits of share ownership over and above milk supply rights. With the milk price high, Fonterra had time to address those issues.

It remained difficult to gauge Fonterra's base earnings, due to volatility and a lack of visibility on core earnings, he said. Fonterra's reporting needed to better align with strategy to provide a basis on which Fonterra could set objectives and guidance for outside and farmer investors, Mr Easton said.

That would enable more informed decisions about value and provide a basis for measuring performance against the strategy.

With a new chief financial officer on board, Craigs expected improvements in that area.