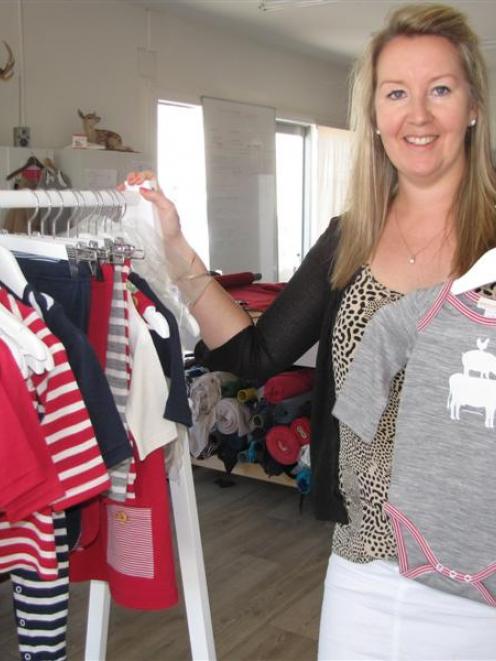 Less than a year after its launch, Suprino Bambino has been picked up by 22 child and baby boutiques following a nationwide selling trip and trade fair.

There were also plans to market it overseas, with Australia potentially being the first international market.

Ms Perriam was overwhelmed by the response, saying it showed there was a distinct gap in the market for a baby and children's brand made from merino and made in New Zealand.

She was rebranding her business, from Christina Perriam to Perriam, and it would become more of a lifestyle brand, with Perriam Man, Perriam Woman, Perriam Homeware and Perriam Sleep. She was looking to open a store in Queenstown.

Ms Perriam, who grew up on Bendigo Station, near Tarras, credited her parents John and the late Heather for instilling a love of ''all things merino'' while she was growing up.

''Not only was I blessed to be raised on such a unique place, I had parents that thought outside the box. They looked beyond the farm gate at the ways they could utilise merino wool'' she said.

The Perriams opened the Merino Shop in Tarras in 1984 to highlight the many ways the wool could be used.

It was that upbringing and ''think big scenario'' that made Ms Perriam realise she was destined to have a brand using New Zealand merino wool.

While a pupil at St Hilda's Collegiate, she had an opportunity to spend time in Tanya Carlson's design studio in Dunedin.

She graduated from Massey University with a bachelor of design degree and then spent two years with the Dunedin Fashion Incubator, forging a career in fashion design.

Suprino Bambino was born after she was disappointed with the lack of creativity of merino brands she was buying to stock the Merino Shop, and the fact they were made in China.

Her involvement with the Merino Shop gave her a good understanding of the tourist market and tourists were looking for New Zealand-made, she said.

She also thought she could do better than the garments made in China, with ones that were more on-trend and with deeper, richer colours.

''We started Suprino Bambino to fill this gap and then the requests from retailers from throughout the country started to come in. They seemed to love the home-grown nature of the clothes and the story of Bendigo Station,'' she said.

Adding hand-knitted elements to the products allowed originality and charm, as well as rekindling interest in traditional craft work. All the garments were manufactured in the South Island.

Designing baby and children's wear had been ''heaps of fun''. She was thrilled with the success of both a trade fair in Auckland in August, which helped get exposure for the brand, and also the selling trip, with retailers ''blown away'' by it.

Another focus this year was to link Bendigo Station more with her business, as the high country property was the ''perfect story'', and she had some ''awesome ideas'' on how to do that.

She was working towards being able to make the garments not only from New Zealand merino wool, but from that produced by the Perriam family's own flock at Bendigo.

In August last year, Ms Perriam shifted her base from Tarras to Wanaka to avoid everyday distractions so she could focus on growing the brand, and that had worked well, she said.

The Merino Shop remained ''incredibly dear'' to her and was still the flagship for her business, she said.

Ms Perriam liked to refer to her brand as ''slow fashion''. They were the sort of garments that could be kept in the wardrobe for many seasons, yet always remained stylish.