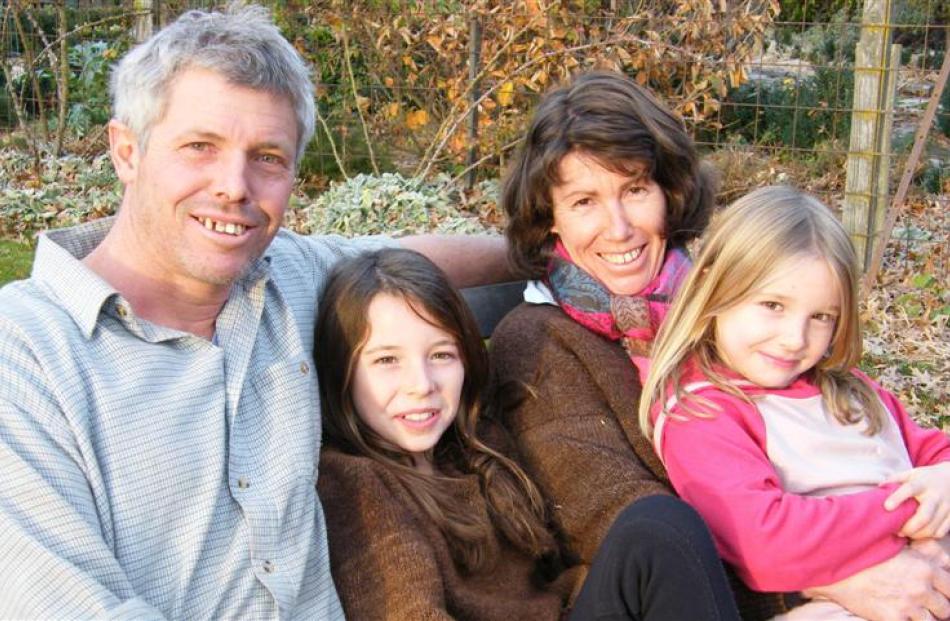 Phill Hunt and Lizzie Carruthers, with daughters Hillary and Fiona, reflect on their success in the New Zealand ewe hogget competition. Photo by Yvonne O'Hara.

It's all about teamwork for New Zealand ewe hogget competition winners Phill Hunt and Lizzie Carruthers.

Ms Carruthers does the stock work on Fork Farm at Maungawera, near Wanaka, while her husband looks after the maintenance, tractor work and book work.

They give each other a hand when required - "not book work, though", Ms Carruthers quickly quipped.

The couple were recently named overall winners in Christchurch of the ewe hogget competition, having also won the Romney breed section.

Mr Hunt, who was preparing to applaud the winner when their names were announced, said it was "such an honour" and took several days to sink in.

They had entered the competition with no expectations and were thrilled to win the Romney section.

Mr Hunt, who is third-generation on Fork Farm, took over running the 470ha property in 1989. The couple, who married in 1993, have another property in South Otago which they lease, which is Ms Carruthers' family farm.

Their Romney genetics were originally from Murray Rohloff at Tuturau, who was a member of the Southern Romney Development Group, and latterly from Andrew Tripp at Nithdale Station, who bought Mr Rohloff's Awareka Romneys in 2008.

The Romneys were productive, suited their farm and were easy-care and free-moving, the couple said. While some farmers had been trying cross-breeding and composites, Mr Hunt believed the Romney was "still a pretty productive sheep".

Asked their farming philosophy, Mr Hunt said they wanted plenty of time for family - the couple have two children, Hillary (11) and Fiona (6) - along with having a productive and profitable farming unit, but with a sustainable focus.

The couple won the Otago Regional Council sustainable resource management award in this year's Otago Ballance Farm Environment Awards. Coupled with their ewe hogget win, it was "quite special", he said.

They had a balance where they could have a profitable, intensive farming system yet still look after the environment.

The couple first entered the ewe hogget competition two years ago and won the Romney section, but did not enter last year.

They wanted to learn more "because all these people that enter these competitions are at the top of their field" and it was a "shot in the arm" talking to them, Ms Carruthers said.

It was also a great opportunity to benchmark how they were performing against their peers, Mr Hunt said.

They were grateful to the judges, all farmers themselves, who took weeks out of their own calendar to travel long distances to judge the event.

They encouraged other farmers to enter the competition, saying there were a lot of high-performing flocks around.

The couple, who received prizes worth $10,000, intended using some of the prize money to develop a shelter belt on the property.

There were more than 200 entries in the competition, including a substantial number from the North Island. Already, interest was being shown in next year's event, national convener George Fletcher said.

The quality of the entries was good and probably reflected the good season, he said.