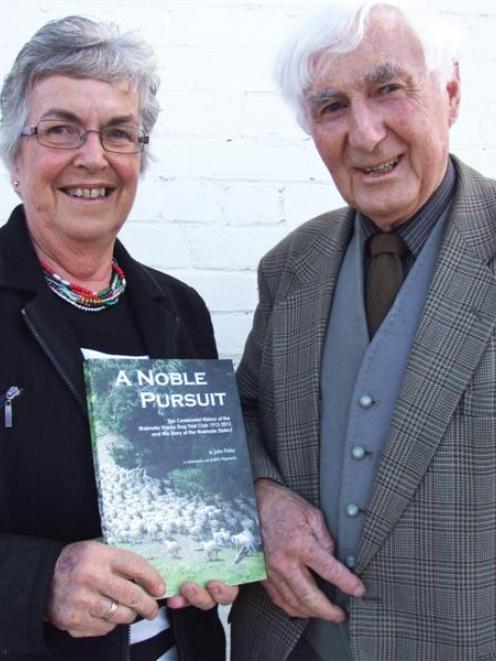 A Noble Pursuit, by Waimate author and historian John Foley, in collaboration with Judith Hayward, of Timaru, not only tells the story of the club since its establishment in 1912 but also that of the Waimate district.

In launching the book in Waimate last week, Federated Farmers vice-president William Rolleston said it was a reminder of ''enormous'' changes in technology.

From bullock trains that hauled logs and produce on unformed roads at speeds of about eight miles a day - a big contrast to the big trucks that were now ''thundering'' down the roads - to the replacement of the horse-drawn strippers with modern harvesters.

However, throughout all those changes, and while there might be fewer sheep, the sheepdog had not been replaced, Dr Rolleston said.

''We haven't found anything better than the sheepdog to do a better job than what the sheepdog does,'' he said.

The first account of sheepdogs in the book revealed ''not a particularly noble pursuit''; it involved the theft of 500 ewes from his great-great-grandfather George Rhodes at The Levels, in South Canterbury.

Contrary to myths that circulated, the legendary James Mackenzie's dog ended up in the possession of Mr Rhodes and the family had a photograph of it, he said.

The backdrop to the book was the varied ebb and flow of Waimate's history and its fortunes. He was very pleased to see the dog trial club was in ''really good heart''.

Mr Foley said the book provided an opportunity to honour those men and women who had got both the club and the district to where it was today.

Obtaining accuracy with the results and the lineage of dogs was a ''difficult component'' and it had been a ''wonderful privilege'' to work with Mrs Hayward.

While Mr Foley looked after the history of the business, she focused on the dog trial aspect, which included compiling results and sorting photographs.

There was a strong family connection as both her maternal and paternal grandfathers were original members of the club.

Both Mr Foley and Mrs Hayward were delighted with the result, saying it had been a very satisfying project.