The father and son are involved with Alpine Pastures, an impressive large-scale finishing operation with properties at Tarras and in Canterbury.

The company’s vision is simple: to be a leading supplier of high quality beef, lamb and venison 12 months of the year.

Both men are excited about the future but they are also keenly aware of the challenges the industry faces, which was reinforced during a visit to the United States earlier this month. Sam tried an Impossible Burger — the high-profile product launched last year by Impossible Foods to supposedly look, cook, smell, sizzle and taste like conventional ground beef, but made entirely from plants.

While farmers did face environmental challenges, it was not regulatory issues that was the biggest challenge ahead, it was from the likes of the Impossible Burger, he said. 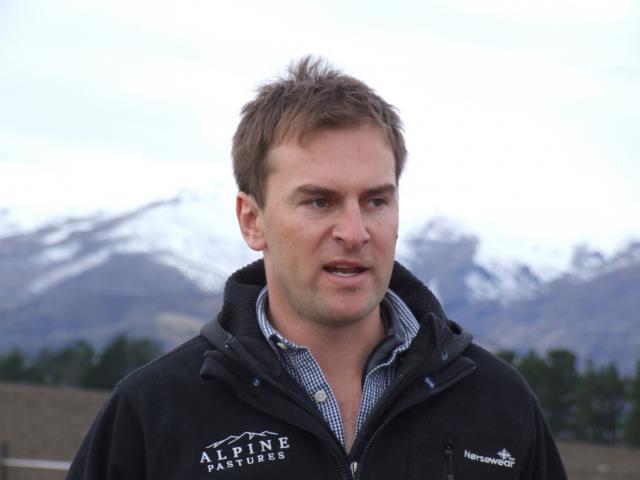 Sam Spiers, from Alpine Pastures, speaks to a group of Landcorp staff. Photo: Sally Rae.
The only way to do that was by producing a high quality product so that when a consumer ate a beef patty or steak, "it tastes bloody good".

It was born out of the vision of Adam Spiers, originally from Canterbury, who had shown much foresight to develop it, his son said.

Two properties at Tarras were bought in recent years, the move into the Upper Clutha driven by the dry conditions, availability of water — particularly alpine water — and good, clean country for stock health.

Lindis Crossing was a 770ha property off the Cromwell-Tarras highway, while 450ha Marylands was on the opposite side of the road. There is also 370ha farmed in Canterbury.

There had been "enormous" development over the period, which much invested, particularly in infrastructure.

At Marylands, native country had been transformed. One particular block had never  previously been farmed.

There was a strong focus on people at Alpine Pastures and they were fortunate to have great farm managers who were true stockmen and also shared the vision, Sam said.

The move to Tarras had paid dividends and animals were doing particularly well there. Overall, it had been a good season at Tarras, while it had been a struggle in Canterbury, where it had been very wet.

To achieve the company’s vision, it was about finding the right genetics and partnering with the right people and processing, Sam said.

As part of that, a partnership has been established with state-owned Landcorp — New Zealand’s biggest farmer — and the two entities shared the same goals, he said.

Alpine Pastures was now sourcing some of its cattle from Landcorp’s Pamu farms, in what was a commercial relationship but also one of "absolute collaboration", he said.

Among the Landcorp staff who visited the Tarras properties last week was Graeme Mulligan, the company’s general manager livestock operations.

Mr Mulligan said New Zealand needed scale — a combination of like-minded people producing a quality product that met the expectations of the customer.

Landcorp needed to have good knowledge of how its Angus cattle genetics performed in a variety of farm systems to ensure Pamu genetics provided consistency and eating quality.

"That’s the thing that will define our future," Mr Mulligan said.

By partnering with the likes of Alpine Pastures, there was an opportunity to see how they performed in a much drier climate, with different farm systems and at scale, alongside other industry cattle.

"We need to be quite open as to how our genetics are. This is a great way of doing it," he said.

Cattle were transferred from Landcorp properties to Alpine Pastures in what was a commercial deal.

The cattle were sold to Alpine Pastures and it was on the understanding that data was shared with Landcorp. The performance of the animals was recorded through FarmIQ.

"It’s an important move for Pamu Farms to be aligned with like-minded industry farmers doing a great job," he said.

Alpine Pastures put the same amount of energy around how to ensure quality and consistency to the specifications of a timetable, he said.

Sam Spiers, whose role involved much of the livestock buying, said the company enjoyed working with Landcorp and they liked the cattle and genetics they were getting.

They were very open to sharing that information with breeders who wanted to be part of the vision, he said.

Their business had a relentless focus on eating quality and he believed the grass-fed movement was a "real opportunity" to grab.

The customer was at the very core of the focus — "the lady buying the steak in the US or China ... and we need to think how they think and we’re really focused on that."

That customer cared about whether the product was grass-fed, free of genetic modification and antibiotics, and that the animal had been looked after and  produced in a sustainable environment.

Traceability was becoming increasingly important, something that was also picked up on during the US trip.