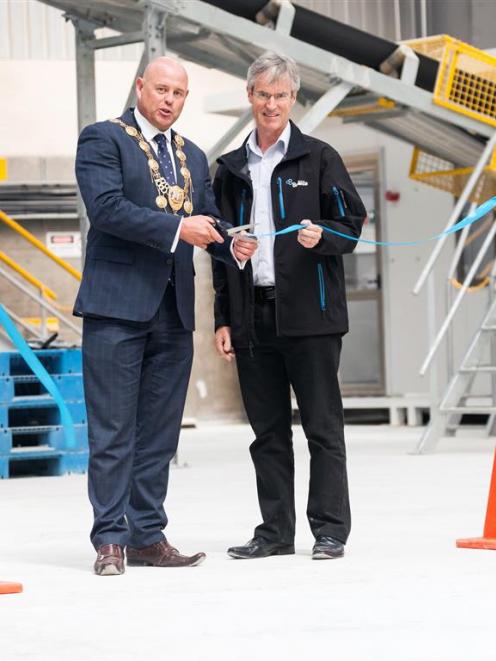 Timaru Mayor Damon Odey (left) with Ballance Agri-Nutrients chief executive Mark Wynne at the recent opening of the PhaSedN plant at Washdyke. Photo supplied.
Agriculture has to ‘‘sell itself to New Zealand''.

That is the strong belief of Ballance Agri-Nutrients chief executive Mark Wynne, who cited a generation of people with no rural connections.

The sector - which was the foundation of New Zealand's wealth - had to keep promoting its good stories, he said.

Mr Wynne was in South Canterbury recently for the opening of a PhaSedN manufacturing plant at its Washdyke factory.

This year, the Auckland region had been added to the Ballance Farm Environment Awards, which was a small attempt to help bridge the gap between rural and urban, he said.

Change could be viewed as either a danger or an opportunity and he preferred to look at it as an opportunity, saying it was exciting times.

It was a very hungry world and, as the global population grew, particularly Asia, then agriculture had a bright future. ‘‘Fertiliser has, literally, a grassroots role in keeping the planet fed,'' he said.

Farmers could look at various changes, such as council regulations, as a danger or threat to their business, or they could look at it as the voice of the community that they wanted change - so embrace it and move on.

Changes were everywhere, it was not just agriculture that was being picked on, and regulations, whether health and safety, council or environment, would never stop.

As the world for farmers changed, so did Ballance and what it offered its shareholders, he said.

‘‘It's really a matter of staying very close to our customers, anticipating trends that are coming and helping them capitalise on their opportunities.''

Co-operatives were originally formed to provide an affordable, reliable supply of fertiliser.

Those principles still remained but there was ‘‘so much more'' that got wrapped around that now, including innovation, having nutrient specialists and helping farmers with nutrient budgets and compliance.

He enjoyed interaction with those shareholders, which sometimes included getting very different perspectives.

‘‘Their view of the world can be very different to your view ... and both of you can be right, so communication is key,'' he said.

Mr Wynne, who has been in the role for 16 months, graduated from Massey University with a bachelor's degree in agricultural science, majoring in farm management and marketing.

He then joined the New Zealand Dairy Board, in marketing. It morphed into Fonterra and most of his time was spent offshore.

He lived in the Middle East, Taiwan, Hong Kong and Singapore for 18 years and it was an ‘‘absolutely amazing'' time.

While Fonterra was best known for its commodity side, he was involved with growing the co-operative's branded business in food service.

From there, he joined US-listed personal care multinational Kimberly-Clark, in Australia. The company produces mostly paper-based consumer products, including Kleenex and Huggies.

The move from Fonterra was driven by his interest in branded products, rather than commodities.

He loved his time at Kimberly-Clark, as South Asia president, based in Sydney, and pushing its brands throughout Asia, Australia and New Zealand.

There was a huge focus on sustainability and creating a high performance culture.

After five years, Mr Wynne had the opportunity to transfer to the US but, with three teenage boys, he decided it was ‘‘actually just time to come home''.

Returning to New Zealand, Mr Wynne thought he had left the corporate world behind him. He was on a couple of boards, doing some consulting, investing in early-stage companies - ‘‘and loving it''.

Then the position at Ballance Agri-Nutrients arose, following the retirement of Larry Bilodeau, and the opportunity to get back into ‘‘grassroots agriculture'' was too good to turn down.

He looked at how he could tie his background in innovation and consumer insights with his love of agriculture.

Mr Wynne said there were always challenging times in agriculture.

Within the various primary industries, there was ‘‘always someone going up and someone down''.

Dairy was down at the moment but beef had been strong and horticulture was having a good year.

‘‘It's all cyclical, it will go around again. It's just a matter of being flexible enough to ride through those bad times,'' he said.

Business at Ballance was ‘‘going OK''.

Farmers were ‘‘long-game players'' and fertiliser was generally one of the last inputs they cut out; if they wanted to grow grass and crops, they required nutrients.

It was definitely getting tighter as the low-payout forecasts continued and he could not see a significant change coming in the dairy industry for at least one more season. The market would rebalance but it would take time.

While everyone talked about the EU ‘‘or'' the United States, it was ‘‘actually and''. Both had to curb their excess production, he said.