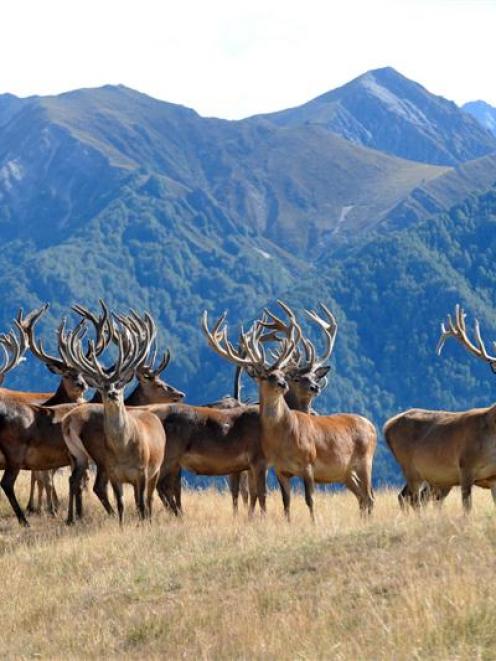 Trophy stag on Glendene station, Lake Hawea. Photo by Stephen Jaquiery.
Markets are diversifying and there are untapped markets for venison and co-products - what is needed now is the product.

That is the message from James Palmer, the director of strategy, systems and science policy at the Ministry of Primary Industries.

Speaking at the deer industry's conference, Mr Palmer said he had the confidence the Productivity Improvement Programme would deliver that.

The programme, which aims to increase sustainable profitability across the industry, is run through Deer Industry New Zealand.

"The good work you are doing in-market really just now, needs more supply, and we have been through a period of relatively soft demand with the global financial crisis, but I have every confidence that we are going to come out of it," Mr Palmer said.

The deer industry, as well as other primary industries, were "really well positioned" to capture the increasing emerging demand as consumers sought safe and sustainable food and other products.

The ministry did not believe that New Zealand would "sleepwalk" its way to prosperity "so enabling you to achieve your potential for New Zealand is our mission".

"While agriculture has been doing its bit for the nation, we can't be complacent or satisfied," Mr Palmer said.

Efficiencies were crucial - over the past 20 years, the national sheep flock had more or less halved but the total production of sheep meat had held steady in volume.

"This is an outstanding productivity story, and one that I think just doesn't get celebrated enough."

While more meat was being produced from fewer lambs, the value of the meat produced had also "grown pretty well too", Mr Palmer said.

The deer industry has had it share of "ups and downs", with good success in stabilising markets and improving prices.

In-market venison prices were at record highs in euro terms, but the New Zealand dollar "has been working against us". Farmgate returns had been fairly static.

At the end of last year, venison production was at its lowest since 1990.

While some would unfairly describe the sector has "having really shrunk its way to success", Mr Palmer believed that was unfair "because you have a fantastic focus on market".

Icebreaker and the New Zealand Merino Company had done a good job of leveraging the country's landscapes.

"When you think about the environment in which deer is produced in New Zealand, you have a wonderful story and I'm sure there's an awful lot more that can be done to leverage value from that."

It was a "free-range story" that "ticks all the boxes", he said.

Deer Industry New Zealand chairman Andy Macfarlane said the deer industry was a high-tech industry and needed to promote itself as that, not a "muddy boots industry".