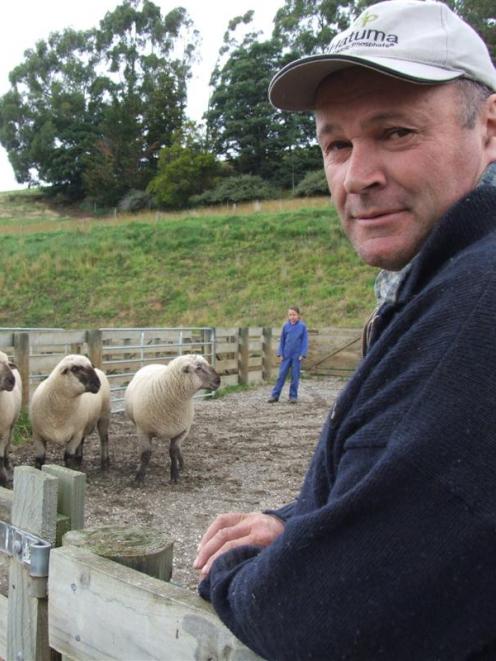 North Otago farmer John Dodd at home at Tapui with some of his Dorset Down rams. His daughter Megan (9) is in the background. Photo by Sally Rae.
North Otago Dorset Down breeders John and Wendy Dodd had a successful trip to the recent Canterbury A and P Association's stud ram fair.

While total sales and clearance rates were lower than in previous years, that was systematic of the general mood in New Zealand, stock agents said.

''It is hard to follow up on last year which was a good year for commercial ram sales. The drop in farmers requiring rams is resulting in a reduction in sales,'' PGG Wrightson livestock genetics manager Bruce Orr said.

''Throughout New Zealand it is more difficult to sell commercial flock rams than it was a decade ago.''

A top price of $13,000 was achieved for a Texel ram sold by Sam and Viki Holland, from Culverden, and bought by David and Christine Graham, of Hindon.

Top-priced rams sold by other southern breeders in their respective breeds were: Trevor and Doris McCall (Gore), a South Suffolk at $7100; Trevor Potter (Pukerau), a Poll Dorset at $6000; Doug and Jeannie Brown (Maheno), a Suffolk at $6500, and Bill and Pauline Bain (Roxburgh), a Corriedale at $5200.

Mr Dodd founded the Belview Dorset Down stud about 1985. After leaving school, he worked for stud breeder Bill Bain.

He was impressed with how Mr Bain was drafting more than half his lambs off their mothers to the freezing works. The Dodd family farm was all Romney at that stage.

It got him interested in the breed and he founded the stud with ewes from Mr Bain. Numbers have increased over the years to about 200 stud ewes.

He was impressed with their quick growth rate which was necessary in dry-prone areas.

''We seem to be able to draft over half the black-face lambs off the mother at 18kg. When you get dry conditions, you don't want lambs on the place,'' he said.

As a young man, Mr Dodd won the Meat Cup at the Canterbury A and P Show which was a highlight in his showing career.

He was pleased with the success of his rams at the Canterbury ram fair. Two were bought by the Duncan family, from Maniototo, and the other by Ian Stevenson, from Canterbury.

Mr Dodd believed there were better purebred sheep around now than there had ever been. He was grateful to those farmers who had supported him over the years.

Dorset Down will be a feature breed at the North Otago A and P Association's 150th show in Oamaru on February 23, and he was hoping it would attract entries from throughout Otago and Canterbury.

Mr Dodd, who is chairman of the Dorset Down breed society, said there were about 70 studs throughout the country and it remained a popular breed.

He was looking forward to the society's annual tour in April, looking at studs from Canterbury through to Nelson, and going through Molesworth and Rainbow Stations.

''It's good getting around and seeing what other people are breeding. You're always learning,'' he said.

At ram week in Gore last week, Perendale breeders enjoyed a strong sale with a top price of $12,000 sold by Tim and Sue Anderson, from Mt Guardian Perendales, at Cheviot, to Pip Wilson and Brian Dickison, at Waikaka. Some Perendale rams were bought for export to Australia.

The 11th annual Craigneuk ram fair, on account of J. D. S. Duncan Farming in the Maniototo, attracted buyers from Blenheim to Southland for what was described as a very strong offering of all breeds.

There were 233 rams sold for an average of $940 and a top price of $3000 for a Dorset Down, Southdown ram bought by Adam Lindsay, from Creekside Farm at Ranfurly.