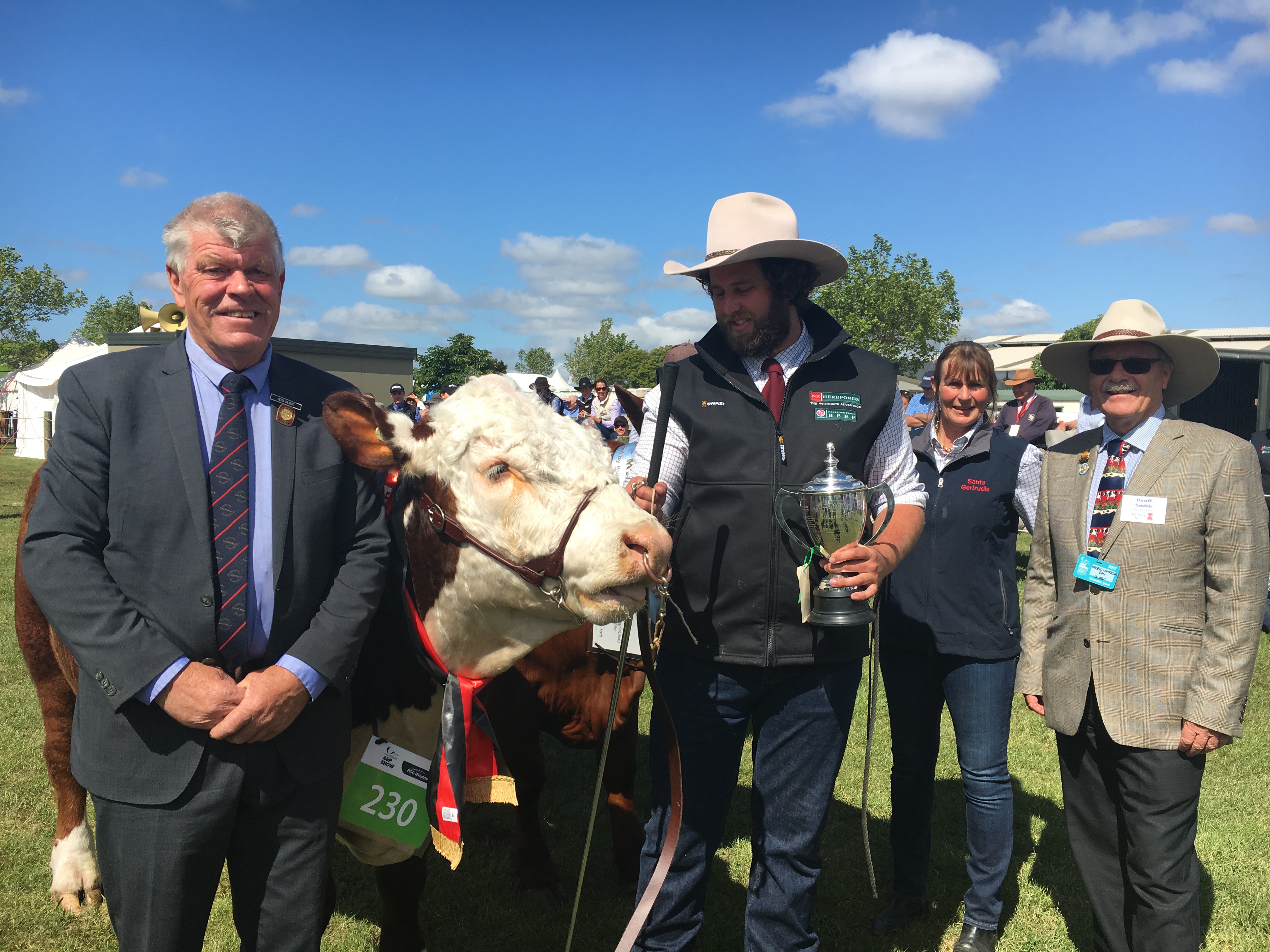 It was the first time in the show’s history the same exhibitor has won the top two placings and it was well-deserved recognition for a family who work hard, are passionate about their livestock and also about exhibiting at A&P shows.

The yearling bull Foulden Hill Mustang was unbeaten in his classes over the two days, both in the Hereford and all-breeds classes, and he also won the Junior Meat and Wool Cup.

Sired by a Canadian bull, McCoy Renaissance, through artificial insemination, he had excellent parading ability — ‘‘when he’s in the ring, he makes you look at him because he walks out so well’’ — a very good set of EBVs, and his conformation was also very correct, Mr Gibson said.

Mr Gibson paraded Mustang, while his mother, Liz, was in charge of the Santa Gertrudis cow, Bluestone Lucy, and Mr Gibson admitted he was hoping that Lucy might take out the top honour.

She was a great representative of the breed and it was great for the Santa Gertrudis breed to be placed so highly. Mr Gibson was also thrilled for his mother as she put so much hard work in. ‘‘It was pretty cool ... she always puts a lot of work in,’’ he said.

Mrs Gibson and husband Anton put in the hard yards at home, while Will joked that he ‘‘turned up for the good stuff’’. As Central Otago area manager for the New Zealand Merino Company, he was based at Cromwell but enjoyed getting home whenever he could and he was grateful for the ‘‘awesome support’’ of his parents. ‘‘It’s a real family thing,’’ he said.

For him, the success at Christchurch was the pinnacle of his involvement with various stock-judging and livestock competitions.The Foulden Hill Hereford stud was established in 2009 and would calve 50 cows next year. Foulden Hill Mustang would be offered for sale, as his sire had been used extensively in the small stud and it would be good to see someone else get the benefit of him.It was very enjoyable seeing their bulls ‘‘out there doing their thing’’ for other farmers, he said.

The Gibson family took five cattle, plus two calves, to the show, along with six Suffolk sheep, with one winning the top muscle scan. In the fleece section, they also won champion fine black and coloured fleece, and also won the ultra fine fleece in the white merino section.

The Paterson family, from the Armidale merino stud at Gimmerburn, won champion fleece with a merino entry, and also supreme champion merino in the sheep section.The Dakins Ambassador of the Year award went to Andrew and Tracy Paterson, from Matakanui Station, near Omakau. The couple have been strong — and successful — supporters of the  wool section. The Ambassador of the Year award honours a competitor who has been seen to support the ideals of the Canterbury A&P Association.