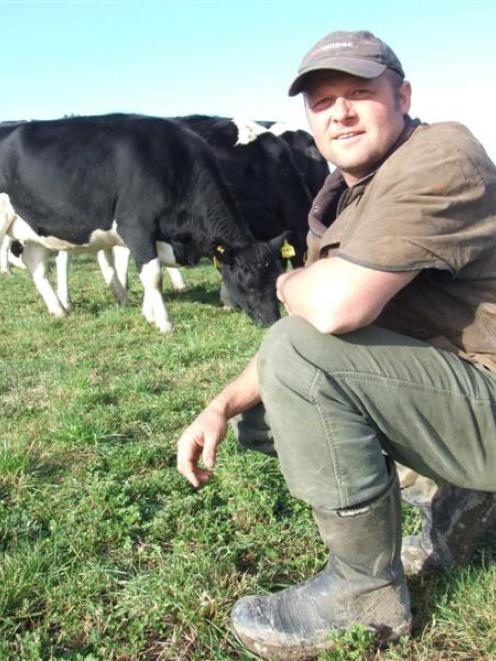 A cut of between about 25c and 30c from the present $8.65kg ms farmgate milk price has been predicted by economists, while a conservative opening forecast for the 2014-15 season, around the $7kg ms mark, has also been suggested.

Mr Strang, who is also dairy chairman of North Otago Federated Farmers, said the 2013-14 payout was still going to be a record, and even a $7 forecast for next season was ''potentially still another good payout''.

He urged farmers to continue to watch expenses, saying it was ''so easy'' in a high payout year to take the focus off working expenses.

Mr Strang and his wife Jane will be milking 400 cows next season on their property inland from Oamaru, having milked 350 this season.

Mr Strang, due to start his eighth season in the industry, spent eight years in the navy, travelling around the world, before joining logistics company DHL, ending up as national transport manager.

He and his wife's desire to have their own business saw him join the dairy industry, initially working for Mrs Strang's parents.

The couple then went sharemilking and the opportunity arose to buy the farm.

He had no regrets about the career change, and while there were lots of challenges, they were not insurmountable, he said.

''We've just got to acknowledge them and deal with them and, if we can, then the potential's huge,'' he said.

He believed there did not have to be a ''huge growth phase'' to have a good, sound industry.

Fonterra had to keep adding value to its products and seeking premiums.

The co-operative's diversified portfolio and strategy to keep adding value should protect New Zealand's dairy industry when powder prices were dropping, he said.

The market was expecting Fonterra to reduce its forecast for the present season from $8.65 to about $8.40 and to potentially drop the opening level for next season to about $7.

With dairy accounting for 30% of New Zealand's merchandise exports, a figure below $7 should keep the dollar under pressure, Mr Dean said.

In late March, Fonterra confirmed a forecast cash payout for the 2013-14 season at $8.75, comprising a farmgate milk price of $8.65kg ms and an estimated dividend of 10c.

ANZ was expecting up to 30c to be cut from this year's milk price, and an opening forecast of somewhere between $6.50 and $7, as milk powder prices were still falling and the dollar was still high.

It then expected Fonterra to revise up its forecast as the season progressed to the low to mid $7kg range due to better prices ahead.

Chinese import demand was likely to pick up, while the dollar was expected to slowly depreciate over the second half of the season, the bank said.

BNZ economist Doug Steel has predicted a new season forecast of somewhere around the $7 mark, while Westpac chief economist Dominick Stephens believed it would be around $7.10kg ms.