Farmers urged to rethink use of fertiliser 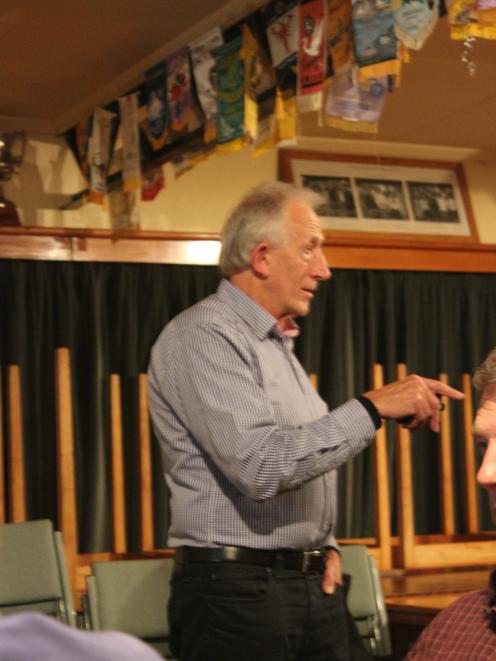 Soil scientist and agricultural consultant Graham Shepherd talks to southern farmers about some of the impacts of fertiliser and the benefits of alternatives at a presentation in Otautau recently. Photo: Nicole Sharp
Farmers need to break the mould when it comes to applying fertiliser on farm and look at the alternatives, BioAgrinomics director Graham Shepherd says.

This was the message he gave to farmers at a presentation in Otautau recently.

He spoke about Kiwi farmers' high level of debt, what he believed were some of its causes and what could be done to improve the situation.

New Zealand farmers spent a lot on supplements and were not producing nutrient-dense, energy-rich species of pastures, he said.

''This is suppressing the nutrient uptake by damaging the soil structure,'' Mr Shepherd said.

''Fertiliser costs - why is it such a high expenditure for so many farms?

''Costs to the farmer is huge and the costs to the environment is obviously huge.''

Mr Shepherd encouraged farmers when getting soil tests done to also get a herbage test.

''[Nutrients could be] high in the soil test but low in the herbage or quite low in the soil, but the plant is actually scoring a normal amount.''

The solubility of the fertiliser played a big part in how it was taken up by the plant, he said.

Fertilisers such superphosphate, di-ammonium phosphate (DAP) and urea were highly soluble, meaning the phosphorus and sulphur ended up in the groundwater.

''If you apply the low solubility, we can kiss goodbye to our high environmental footprint.''

Although superphosphate had served farmers well, it was time to move on, Mr Shepherd said.

The other nutrient of topic was nitrogen.

''And we wonder why our environmental footprint is increasing. This begs the question - is there a better way of doing it?''

There were more cost-effective ways of getting nitrogen into plants, he said.

''We could kiss goodbye to our environmental footprints.''

Another way was to increase clover cover and promote the nitrogen fixation of the clover legumes by ensuring good soil structure.

Lastly, farmers needed to promote the draw-down of the 78% of nitrogen which was in the atmosphere through microbes.

''It's all about good grass management.''

To do all of this farmers needed to look at smart fertilisers, which activated the microbes in the soil, Mr Shepherd said.