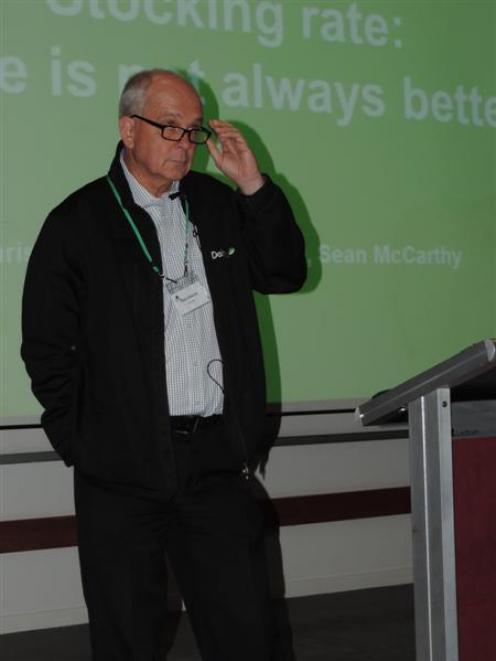 ''The optimum stocking rate is never a constant. This paper challenges the belief that more cows means more profit.''

Stocking rates were influenced by changes in cow genetics, input costs and milk price, he said.

However, the number of cows per hectare was not an adequate description of the feed balance, especially when comparing between farms, Mr Glassey said.

''Comparative stocking rate [CSR, in kilograms of liveweight per tonne of dry matter], along with other indicators, can improve the estimation of the balance between annual feed supply and feed demand.''

Research suggested that profitability could be maximised when CSR was pitched at no more than 80kg of liveweight per tonne of dry matter offered on an annual basis, he said.

''The research also shows that gains in cow efficiency from improved feeding of the well-bred modern dairy cow can potentially compensate for reduced pasture utilisation resulting from a lower CSR.''

When adding cows increased farm revenue more quickly than costs, that was where stocking rates should be pitched, he said.

''We need to find the cows contributing most to costs - get them out of our environmental footprint.''

Genetic changes in cows had been ''huge'' between 2000 and 2010. The average cow now produced more milk and was heavier, so more feed was needed per cow. Geneticists said farmers should give an extra five tonnes of dry matter per 300 cows, or take away one cow per 300, Mr Glassey said.

When nitrogen limits came in, the solution would be to cap the nitrogen inputs, he said. That would change feed quantity and quality, so the CSR would need to be rebalanced.

Twenty years of research at Ruakura farmlets showed dairy farmers could operate within a range of figures, as long as everything was managed well.

''CSR is not a strong predictor of profit. Ultimately, profit is determined by the management practices on your farm. Implementation is the key issue.''

A Canterbury study showed if CSR was reduced by 10, pasture utilisation dropped by 5%, milksolids production increased and nitrogen leaching could be reduced, Mr Glassey said.

The challenge to the farmer was to get good information about their pasture growth and consumption.

''Can you estimate your CSR? Have you adjusted it to allow for the genetic improvement in your herd?''Do you know your current nitrogen input and surplus? How will the feed supply on your farm change if nitrogen limits force lower leaching?''

One Canterbury farmer involved in a trial said he had had a stocking rate of close to four cows per hectare, but his adviser suggested dropping the numbers to get the same production level. He wanted 440kg of milksolids per cow, so he divided it up across the farm size.

He saved at least $1000 for every cow dropped, and there was less pugging on the farm.

''We actually improved production,'' he said.

He made more baleage, which was all used in the autumn.

''The objective was to utilise grass. Anything we made on-farm was turned into milk.''

Mr Glassey said Canterbury dairy farmers should not be too

concerned about profitability if they were asked to reduce their stocking rate in response to environmental concerns.

''There is evidence accumulating that operating profit per hectare can be maintained at lower stocking rates. Many are already farming at stocking rates appropriate for optimising profitability. The challenge will be managing the balance of feed supply and feed demand on these farms while reducing the nitrogen surplus.

''Genetic gain in dairy herds means that ongoing adjustments to the feed supply and feed demand ratio are necessary, and provides opportunities to maintain profitability.

''Continuing with the historical approach of increasing stocking rate to increase pasture utilisation and milksolids per hectare without regard to profitability and the nitrogen inputs required to sustain the milksolids output is unlikely to be an option.''