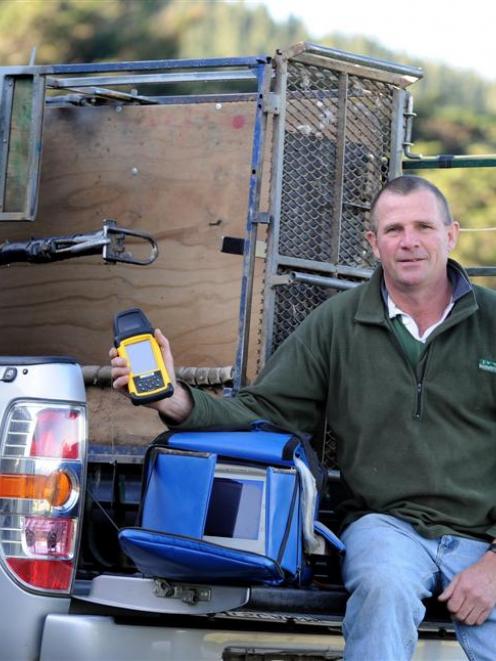 Peter Clulee with his personal data assistant, which has replaced pen and paper for recording eye muscle scanning. Photo by Peter McIntosh.
Peter Clulee is enjoying a well-deserved break.

Mr Clulee, who operates Otago Ultrasound, doing both eye muscle and pregnancy scans on sheep, has had a hectic few months.

Since the end of January, he has been travelling the South Island doing muscle scanning, working as far north as Blenheim and right down to Southland.

He worked every day, including weekends, for about 12 weeks, and finished about 10 days ago, when he returned home to Outram.

This year, he bought another utility vehicle to keep in Canterbury so he could fly back and forth, making travelling easier.

Born and bred at Waikouaiti, Mr Clulee was a mechanic by trade before working on farms. It was while he was stock manager at Hukarere Station in West Otago that he became interested in pregnancy scanning.

For the past 17 years, he has been doing pregnancy scanning. He later got the opportunity to learn how to do eye muscle scanning on stud rams.

Pregnancy scanning kicked in from the middle of June, for about nine to 10 weeks. He anticipated there would be a lot more hoggets mated this year which would drag out the season.

He scanned a lot of sheep in the Middlemarch, Waikouaiti and Palmerston area, as well as spending about two and a-half weeks in Southland.

It was fortunate most of his run was areas that had not been affected by dairying, so sheep numbers had not dropped dramatically.

He found muscle scanning more interesting than pregnancy scanning. The average commercial sheep farmer in New Zealand probably had no idea what a stud breeder put in to try to produce a good ram, he said.

And just because a stud breeder might have 20 sheep to scan, that did not make him any less passionate about breeding a perfect ram than one who had 500 to scan.

"To me, the wee fellas are very important."

A major development had been the use of a touch-screen personal data assistant, which saved him recording tag numbers and figures with pen and paper.

At the end of each job, the information was sent to a database in Christchurch and the results were sent back to farmers within 24 hours during weekdays.

For 11 years, he had trips to Australia to do mostly muscle scanning, something he enjoyed; except for the long distances travelled between jobs.

Two different ultrasound scanners were required for pregnancy and muscle scanning and they were supplied and serviced by a Melbourne company.