Fonterra: 'We are changing'

Fonterra’s Edendale site environmental team leader Vijai Lal in front of an aerating pond at the wastewater treatment plant. Photo by Sally Rae.
Let's face it —  wastewater might not be the most glamorous subject.

But at Fonterra’s Edendale factory,  some  cool things are being achieved with treated wastewater.

It is being used to irrigate surrounding farmland and  "waste-activated sludge" (WAS) from the factory  is  being used as fertiliser. 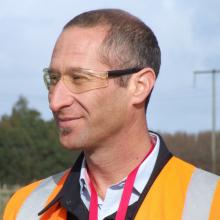 Edendale is a big operation, employing about 650 people.

Last year, just over 2.5 billion litres of milk from farms throughout Otago and Southland was processed there  and at Fonterra’s Stirling cheese factory, near Balclutha.

A milk protein concentrate plant separated protein from skim milk and turned it into protein powder; a reverse osmosis plant increased capacity on an existing drier by 300,000 litres a day; and an anhydrous milk fat plant was capable of processing 550,000 litres of milk into cream per day were commissioned in  August last year.

The development coincided with an  upgrade across the site, including the wastewater plant. 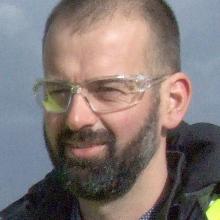 Richard Gray.
Since then, "quite exceptional" results had been  achieved, southern operations manager Richard Gray said.

Fonterra is a finalist in the Deloitte Energy Excellence Awards "large energy-user initiative of the year" category  in Auckland  on Wednesday.

It needed to show as much leadership as farmers were in improving environmental performance, Mr Gray said.

The co-operative had invested time, effort and money into  energy recovery, he said.

The expansion  at Edendale  meant milk processing  had increased by  1.4 million litres a day without any extra energy generation at the site.

Instead of putting in another boiler, which would have been easier, the factory was buying in more electricity, he said.

When running at full capacity, the milk protein concentrate plant created its own water and was self-sufficient for water.

Mr Goldschmidt said there had been a "really big change" at Fonterra around sustainability and how it was viewed.

In the past, it had been about complying with regulations but  social responsibility was "now your licence to operate" with rules and regulations as the bottom line.

Fonterra was trying to become a leader in social responsibility and it was also becoming a "true leader" in water efficiency, he said.

Edendale was one of the better, if not the best site, in terms of water efficiency.

While the cheapest option would be to take more groundwater, it became more efficient and better for Fonterra re-use  water.

A reduced carbon footprint and energy costs were  better for the business and its stakeholders, he said.

Treating wastewater, managing it well and linking it with farming meant less impact.

For every litre of milk processed at Edendale, about 0.8 litres of water was used, which was below the industry norm, Mr Gray said.

Wastewater was processed in a computer-controlled system.

The treated wastewater went either straight to irrigation or was stored in a pond with  the equivalent capacity of 40 Olympic-sized swimming pools.

Fonterra had consent to discharge to the Mataura River but that happened rarely.

Fonterra used  the treated wastewater to irrigate the surrounding farmland, which it owned.

"Cut and carry" harvesting of that grass was given to shareholders as silage and returned to the co-operative as milk.

WAS was being turned into a "valuable" fertiliser.

It was not registered as a fertiliser but Fonterra had consent to spread it.

It was a "big win" for farmers and it would become a saleable product as demand grew, Mr Goldschmidt said.

Fonterra was working with a company to create a dry pellet stockfood from it and was looking at a partnership to make that  commercially viable.

The Edendale factory had expanded over the past 15 years but groundwater results had improved over that time, he said.

A challenge to  Fonterra’s energy efficiency strategy in the South Island was finding a viable alternative to coal and the logistics and supply around that.

Long-term, the co-operative was moving towards renewable sources of energy.

At Edendale, just under 1000 tonnes of coal were used a day at the peak of the season, manufacturing about 2500 tonnes of product.

Fonterra was working hard to look at ways to reduce its coal use.

Three factories in the North Island used coal, as did all its South Island factories did, Mr Goldschmidt said.

Fonterra’s sustainability plan was "pretty ambitious" but it was a great commitment to where the company wanted to be.

"To me, the value is to have community groups that in the past would be opposed to what we do to say they support us. You can’t put a value on it."

Public expectations changed all the time and some conversations were "really hard", with groups that did not like the dairy industry, but there had to be honest conversations.

"There are a number of people fundamentally against dairying, we’ve got to keep engaging with them.

"There’s no harm in being fundamentally opposed to each other but we’ve got to keep engaged and keep the conversation going. We need these pressure groups to help us change. We are changing," he said.