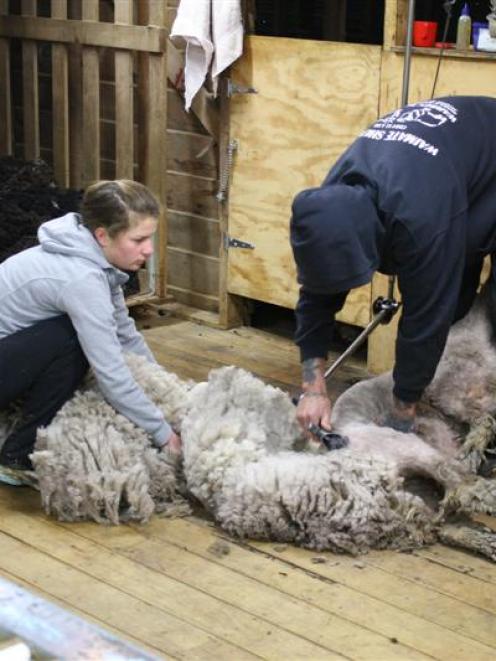 Harriet Gardner shows her wool-handling ability during shearing at the family farm in South Canterbury. Photo supplied.
Harriet Gardner admits she might not be the ''fastest in the world'' at it - but she can shear a sheep.

That skill will be crucial when Miss Gardner (20) takes part in the preliminary round of competition at the World Young Shepherds Challenge at Lincoln from July 3-5.

Young Farmers members from throughout New Zealand applied for a chance to compete with the top eight, chosen based on their skills, qualifications and involvement in the sheep industry.

The two top-performing competitors will represent New Zealand at the final in France from September 28 to October 4.

Miss Gardner, who hails from a sheep and beef farm at Waihaorunga, near Waimate, expected the two trickiest parts to be shearing a sheep - ''it's not like I do it for a day job'' - and the quad bike, as they did not have one on their farm.

However, she was fortunate to have neighbours with one and she had been practising on it.

She has always been interested in farming and, when her brother who worked on the farm headed to university and a job became available on the 600ha property, she took it up.

A keen equestrian rider, she has successfully been involved in stock-judging competitions, and she hoped to eventually take over the family farm.

Miss Gardner is a member of the Glenavy Young Farmers Club. Fellow-club member and vice-chairman Alex Reekers (23), her neighbour, is also among the eight finalists.

While there would be friendly rivalry, Miss Gardner said she would be ''pretty chuffed'' if selected.

Brooke Elliot (23), from Lammermoor Station, Paerau, has also been selected.

Miss Elliot, who works on Kyeburn Station and also runs a contract sheep dipping business, is chairwoman of the Maniototo Young Farmers Club.

The inaugural World Shepherds Challenge in Oamaru in 2011 was won by Peter Klaassen, from Lincoln University.