But once there, the Otago farmer was ''pretty impressed''. 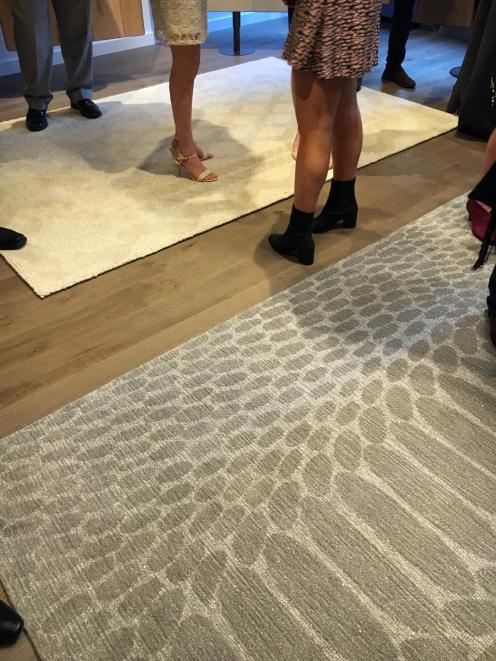 Rugs on display at the Just Shorn launch.
Mr Peters and his family operate Peters Genetics, a large-scale farming operation in Otago, running about 32,000 ewes.

Having been farming a long time, he had heard various initiatives in the wool industry before that ''never got ticked off'' and wasted money.

But he was very motivated by what was being done by Carrfields.

He said the quality of the rugs and carpets was ''just amazing'' - ''the colour and texture was just unbelievable'' - and he was also amazed by the people they met.

''The people we dealt with wanted to be in bed with us, they wanted to be part of us. That's what I took out of it.''

The event let growers see carpets made from their wool presented on an international platform to an audience which included media, interior designers and Carlisle sales specialists, Mr Carr said in a statement.

''Our growers got to see first-hand that their wool is a truly premium product that is in high demand at the exclusive end of the market in the US. It was a very proud moment for them.''

On the launch day, the farmers were given a tour of One World Trade Center, rebuilt on the Twin Towers site.

The New Zealand contingent was the first group to be permitted to tour the building.

Growers were then introduced to celebrity interior designers Mark Brunetz, Jennifer Bertrand and Lonni Paul, who were involved in developing the new range and charged with producing new concepts every quarter.

Under CP Wool's partnership with Carlisle, the Just Shorn range of carpets and rugs was now available through six showrooms across the US.

Carlisle, known across North America for its timber flooring, recognised the potential for New Zealand wool carpet among its customer base, Mr Carr said.

A key area of opportunity identified was in the luxury apartment market in New York where 80% of a residence's floor area must be covered in soft flooring to reduce noise.

The US was the largest importer of wool floor coverings and New Zealand strong wool was estimated to be used in 45% of all wool carpet used there.