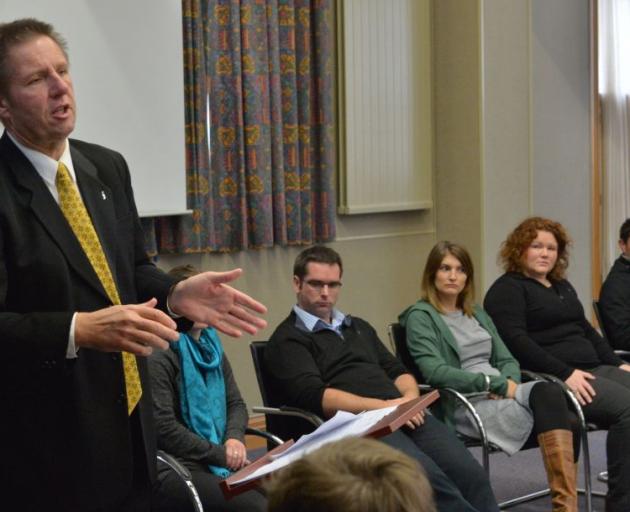 Prof Jon Hickford, from Lincoln University, addresses the Soil Makes Sense event at John McGlashan College, watched by (from left) Oritain scientist Ruth Warren (obscured), Justin Kitto (DairyNZ), Juliette Maitland (DairyNZ), Hayley Jenkins McCaw (ASB) and dry stock manager Leon Olsson. Photo by Gerard O'Brien.
When it comes to his career, Leon Olsson's only regret is that he did not get into the agricultural sector earlier.

Mr Olsson (26), who manages a dry stock farm at Ranfurly which is part of a large scale dairy operation, told pupils at John McGlashan College, in Dunedin, this recently.

It was part of Soil Makes Sense, an initiative supported by Lincoln University and DairyNZ aimed at promoting the opportunities available in the primary industries.

A panel of speakers outlined their own career paths and involvement in the sector.

The agricultural industry was probably ''one of the most impressive'' industries in New Zealand and it was ''screaming out for young Kiwi fellows like yourself'', Mr Olsson told year 12 and 13 agriculture and accounting pupils at the school.

It was not a hard industry to get into or to get ahead in, he said. He had little experience when he went farming in 2010 and was now earning more than $100,000 a year.

As a teenager, he had disliked school and left ''pretty early''. It was about having the right attitude and discipline.

''There's a huge network of people willing to help you get ahead. Surround yourself with the right sort of people [and] you're going to get a long way.''

He spent five years working at the Stockton mine, on the West Coast, which was a ''fantastic experience''.

When the global financial crisis hit, the mine scaled back and he was looking at the prospect of unemployment.

The environmental debate meant an opportunity arose for him to work at the Otago Regional Council and he later joined DairyNZ, where he worked with dairy farmers to implement environmental management limits.

A typical day could involve being in the office, at a meeting in a community hall or talking to farmers.

There were many opportunities in the sector for people with an environmental or science background, including in soil and nutrient management, climate change issues, animal science and genetics, he said.

Oritain scientist Ruth Warren originally came south from the North Island to study medicine but quickly realised she did not want to be a doctor.

She ended up studying chemistry and completed a bachelor of science degree with honours. She has worked at Oritain for about a year and is also finishing her master's degree.

The Mosgiel based company scientifically certifies the origin of food products, protecting its clients from food fraud.

While it was a great experience, she came to the realisation that she did not like science - ''the numbers, details, all that stuff didn't do it for me'' - and that it was communications and talking to people that she did enjoy.

She spent four years as a consulting officer at DairyNZ before moving into a developer role in the people team.

Her job involved helping farmers upskill in managing their staff. People management was ''huge'', she said.

Every day was varied, and she recently judged a sharemilker of the year competition in Southland and attended a strategy meeting in Hamilton. While she lived in Canterbury and worked from an office at Lincoln, it was a national role.

Jon Hickford, a professor in animal genetics at Lincoln University, was about to ''get on the bus'' to Dunedin to study medicine when he realised he did not like sick people. So he turned his attention to agriculture and never regretted his decision, he said.

New Zealand was a food producer - ''that's how we make our place in the world'' - and it sold ''really good food''.

''Our food is prized around the world because it's good stuff.''