Keen for another crack at TeenAg title 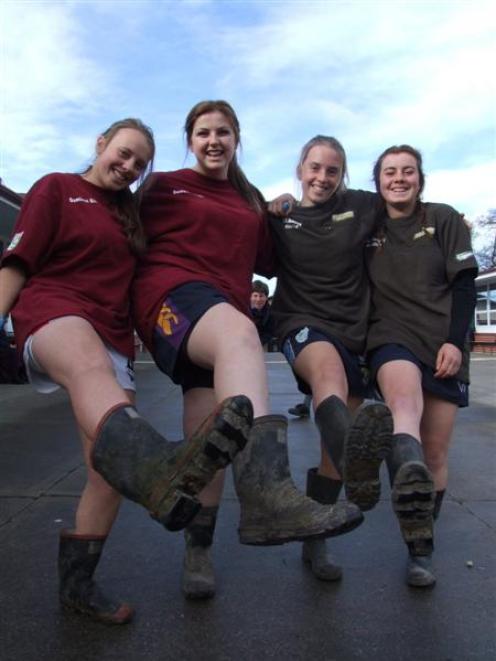 TeenAg competitors (from left) Georgia Malcolm (16), Brittany Caldwell (16), Holly Malcolm (15) and Ella Sanderson (14), of St Kevin's College. Photo by Sally Rae.
Admittedly, there was a little sibling rivalry when the High Country Hillbillies took on the Gumboot Girls - and the rest of New Zealand - in the TeenAg national final.

After seven regional finals were held throughout New Zealand earlier this year, the top three teams from each region progressed through to the grand final, held alongside the ANZ Young Farmer Contest at Lincoln on Friday.

The pair, who have competed at regional level three times previously, were thrilled with the win and said it was ''very cool'' to be part of the competition.

TeenAg competitors, in pairs, along with AgriKidsNZ, in teams of three primary-school children, were challenged in a series of timed modules on all sorts of agricultural and not-so-agricultural tasks.

The top seven teams from each series then went on to compete in their respective race-off challenges.

The competition tested practical farming skills and knowledge, but the main goal of the programmes was to help young people explore the fun and rewarding side of agriculture at an early age.

Holly said the girls had been practising their skills on-farm and increasing their agricultural knowledge and were keen to ''give it a go''.

The teams had a lot of support, and were kept busy at a fundraising sausage sizzle at St Kevin's College last week, where they were dressed in their team shirts, gumboots and shorts. They were also grateful for local sponsorship.

While the two St Kevin's College teams were unplaced in the national final, they were keen to have another crack next year.

Their father Bill was third in the grand final of the Young Farmer Contest in 1992 and second in 1994, and their grandfather Lindsay was fourth in 1971. Their mother Jenny also competed at regional final level.

St Kevin's College agriculture teacher Paula Eatherley said it was ''fantastic'' for the school to have two teams in the final.

To place first and second in the regional final and get through to the national final was a ''really great credit'' to the quartet and the school.

''We're hoping to win, obviously, but just to be there at that level and meet people from all over the country and have a fantastic experience will be wonderful for them,'' she said.

Agriculture was strong at the school and studied by about 100 pupils from year 10 to 13.

AgriKidsNZ was established a decade ago with one national club and membership has been growing steadily. There are now more than 1300 members.

The first TeenAg club was established in 2009 and the first competition held two years later. There were now more than 500 members throughout New Zealand.