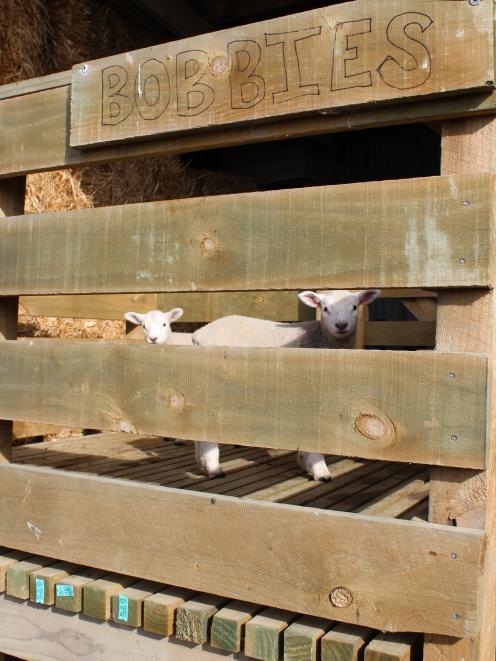 With the Eade family's bobby calf loading pen getting little use, the family's two pet lambs enjoyed a short stay over last week. Photo: Nicole Sharp
Kelso dairy farmers Ken and Bruce Eade have been rearing their bobby calves for the beef industry for the past three years.

The father-and-son duo farm 270ha with their wives, Nancy and Tanya, in West Otago and after they bought their heifer block, down from the main farm, they decided it made economic sense to hang on to the bobby calves, they said.

''We thought we might as well run some bull-beef there too,'' Bruce said.

They used a Hereford bull over any cows they did not want to keep the calves out of, which provided them with a wide range of options, he said.

They reared the Hereford heifer calves as well as the bulls, as there was a market for both, Bruce said.

But they not only reared the beef-crosses; they kept their Friesians and Ayrshires and reared them as well.

So far this year, the Eades had only sent nine bobby calves on the bobby truck.

''There's so much difference between what you get for a 4-day-old calf as to when you raise them,'' Ken said.

The Eades also split calved, so reared about 80 calves from the autumn calving and between 80 and 100 from the spring calving.

Some of the Friesian calves were sold at 4-days-old and raised for beef, and the others were kept and reared on-farm, Ken said.

Each year they sent only 15-20 bobby calves away on the bobby truck, Bruce said.

There was no plan to change the system either, which had worked well for the pair in the past few years, they said.