Lack of women in leadership 'constraining' 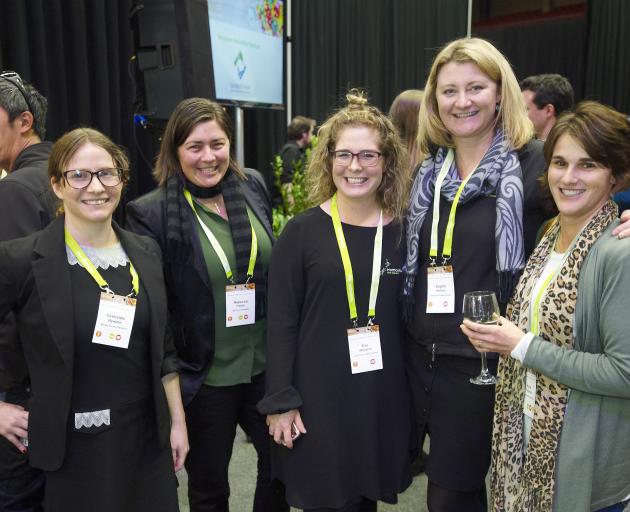 Discussing why there are few women in leadership roles in the horticultural industry during the HortNZ conference in Tauranga are (from left) Cressida Bywater, of Market Access Solutionz, Rebecca Fisher, of NZ Citrus Growers Inc, HortNZ policy analyst Eve Williams, HortNZ's natural resources and environment manager Angela Halliday and Kylie Faulkner, of Sutherland Produce, Auckland. Photo: Supplied
Having few women in leadership roles within the horticultural industry was ''constraining'' the sector, a recently released Women in Horticulture study says.

The report, researched and written by UMR, was released at Horticulture New Zealand's conference in Tauranga last month.

Horticulture New Zealand policy analyst Eve Williams and HortNZ's natural resources and environment manager Angela Halliday had instigated commissioning of the report following a discussion last year about why there were few women in governance roles in the industry.

The report said women were more likely than their male counterparts to foster an increase in challenging traditional thinking, carry out more collaboration and idea sharing, be more focused on results and pay attention to detail while seeing the wider picture.

Ms Williams said the ''give permission'' term, meant women needed to give themselves permission and have the confidence to put themselves forward for governance roles.

''Often women are used to giving way to someone else, saying 'you go first','' Ms Williams said.

''That is quite a feminine trait.''

As a result of their discussion they held a workshop in August last year and invited women for a ''horticultural think tank''.

''We had probably 25 women there, including Lindy Nelson, of the Agri-women's Development Trust, and Donna Smit, a Dairy Women's Network trustee.''

They discussed if there was a need for a horticulture-focused group similar to Dairy Women's Network or Rural Women New Zealand.

They formed a steering group, sought funding from the industry, and asked UMR to carry out the independent research to determine the extent of the issue.

Researchers talked to men and women vegetable, berry fruit, kiwifruit and avocado growers in South Auckland, Bay of Plenty and Hawke's Bay as well as those in focus groups, and female industry professionals for an overview of the experiences women had in the industry, as well as the perceptions of opportunities for advancement.

The study found that ''while horticulture did a lot of good work in terms of getting people into the industry, and while the workforce tended to be 50/50, there needed to be improved pathways to leadership to ensure better representation on the top tiers of industry management''.

''The results of the research confirmed what we thought,'' she said.

''There were no surprises about barriers, the old boys network and it is quite a patriarchal business.''

She said women's roles in horticultural businesses tended to be ''just a job title away'' from being in strategic positions and many in the industry often ran the business side of growing operations as well as running their families, and were involved in marketing, dealing with contractors and staff, health and safety, accounts and compliance.

She and Ms Halliday intend to hold a follow-up workshop next month and they will discuss and outline the next steps forward.

Elizabeth Hinton, of Alexandra, has been in horticulture for many years and used to attend fruit growing meetings in Central Otago many years ago, but has since retired.

She said if she did go to any meetings back then, she usually felt uncomfortable, and she would tend to find a course of action had usually already been decided on and any discussion was just almost window dressing; people who might not speak out during the meeting might grumble on the way out but were not strong enough to speak out and if a woman came up with a good idea, it usually was ignored for a while, and then later would come out of the cupboard as being some man's idea.