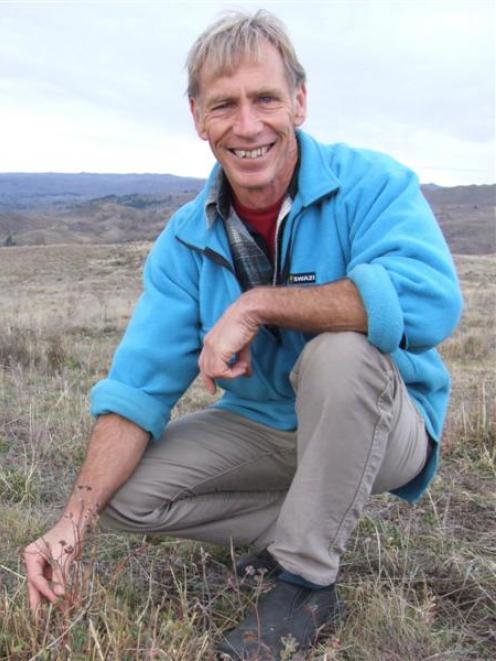 Dr Barrie Wills sees land condition and vegetation monitoring as a remarkably valuable information system. Photo by Sally Rae.
When it comes to farming, Barrie Wills is an advocate for striking the right balance between conservation and production.

Brought up on a Timaru farm and now living in Alexandra, Dr Wills has spent more than 30 years as a research scientist.

He was initially involved with soil conservation control under the then Ministry of Works and Development water and soil division, and then pastoral management, revegetation and erosion control in semi-arid and high-country environments under Landcare Research and AgResearch, until 2004.

His aim was to work directly with innovative and pro-active landowners to provide them with relevant, timely and cost-effective information from monitoring of hill and high-country land condition and vegetation resources, inherent pastoral values and the presence of invasive plant species.

That allowed farmers to make informed decisions regarding future production and farming operations, and any related conservation management actions.

Such work, he believed, was becoming increasingly important in the marketplace and increasing numbers of farmers were becoming ''genuinely interested'' and seeking such information.

The long-term aim was to ensure that the monitoring became an accepted and regular pastoral run management tool.

Land condition/vegetation monitoring was a valuable information system. It could provide long-term data which related not only to soil and plant conservation, but could also influence animal nutrition and health issues, wool and meat marketing strategies both nationally and internationally, and play an integral part in tenure review negotiations, Dr Wills said.

In the past, research institutes had done the research but then gone away with the results. It was important that landowners retained ownership of the data, as individual farm management and the local farm community would gain long-term benefits from that accumulated and shared knowledge.

It was satisfying being able to work alongside farmers and ''down the line'' be able to help make a difference.

Farmers were ''biting the bullet'' and seeking the information.

It was information they and their community owned. More farmers were also looking at tenure review and vegetation was an important part of that, he said.

When it came to marketing New Zealand's agricultural products, being able to say that a product came from a property that was well monitored, with a good balance of exotic and native pasture was ''a key''.

Long-term, he believed dryland pastoral farming in Central Otago had a ''really good future'', providing farmers could get reasonable prices for their products, and the sooner the meat industry was sorted, the better, he said.

Since moving to Central Otago in the late 1970s, Dr Wills had seen a lot of changes in the landscape.

There was the impact of the dairy industry and the ''shifting of cows up and down to Southland'', and the advent of large centre-pivot irrigators.

There had been a change in attitude towards burning, with more animal management now of tussock grassland.

Water harvesting was also very important - it was insurance for water supply for the future - and landholders needed to be looking after all the high alpine swamps and tussock grassland above about 1000m.

There was technology to push agricultural development ''up to the top of the hill'' and he hoped that did not happen.

Asked his thoughts on the grazing of conservation land, Dr Wills, who was a member of the inaugural Otago Conservation Board, said there had to be a balance.

''It's not totally lock it up,'' he said. He pointed out that the land was always grazed in some form or another, and it was about getting the right balance.