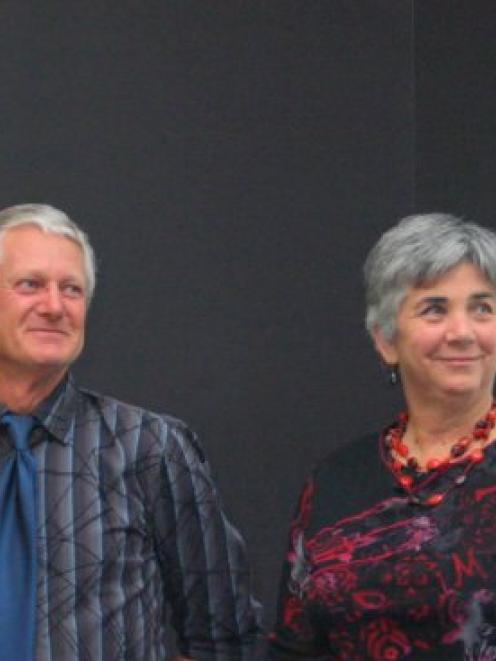 Dennis and Margaret Larsen during a presentation at the New Zealand Farm Forestry Association conference. Photo by Richard Schofield.
When Dennis Larsen bought his Lawrence farm in 1980, there were no trees - just "a bit of scrub".

Mr Larsen's efforts were recognised this month during the New Zealand Farm Forestry Association's annual conference, when he was presented with the Husqvarna South Island Farm Forester of the Year award.

Originally from north Taranaki, he attributed his love of trees to his father, whom he said was "trees through and through", although he concentrated more on the nursery side of the industry.

There were a lot of trees in that region and, when he moved south, he could not get over how barren it was.

Sir Robin encouraged him to go to Lincoln College [now Lincoln University], where he gained a diploma in agriculture.

After that he joined Maf and was based in Dunedin, where he did brucellosis testing around Otago for about 15 months.

He then got a farm manager's job at Craigellachie, near Beaumont, on a farm owned by Des Hay.

Coincidentally, the farm owned by Mr Hay's son Mark was one of the properties visited during this year's conference field days.

That was followed by a couple of years doing casual work, before Mr Larsen bought the Lawrence farm.

He got involved with the Otago Catchment Board and then the South Otago branch of the New Zealand Farm Forestry Association, along with a farm forestry discussion group.

That encouraged him and his wife Margaret to "keep going and keep planting".

Radiata pine was the main species planted on the farm but there was also Douglas fir, macrocarpa, eucalyptus, alders and larch - "bits and pieces all around".

It had been a family affair, with the couple's three sons even helping to plant when they were at school.

Erosion control was the main reason initially for planting, then to provide shade in the summer.

Then there were the aesthetic benefits and the plantings had also "brought the birdlife back" which was "a big plus", he said.

In most instances, trees were planted on poorer areas of land not being used much.

Mr Larsen described the farm forestry fraternity as "like a family" and he immensely enjoyed his involvement with the association.

He was a member of the committee that organised the recent conference in Otago. The weather played its part and it was very successful, he said.

Numbers had dropped since the conference was last held in the area 12 years ago and the lack of young people becoming involved was concerning, he said.

There were also a lot of farmers who planted trees but were not members of the association.

He encouraged people to join, saying it was a very worthwhile organisation. "It's done nothing but help people," he said.

He was thrilled to receive the award, saying it was nice to be recognised for "all the hard yards".

The Landcare Trust award was won by Rural Women Southland, while Chris Sime, from Outram, won the Neil Barr Award and Barry Gray, from Owaka, won the Peter Smaill Award.