Loyalty key to 50 years as an agent 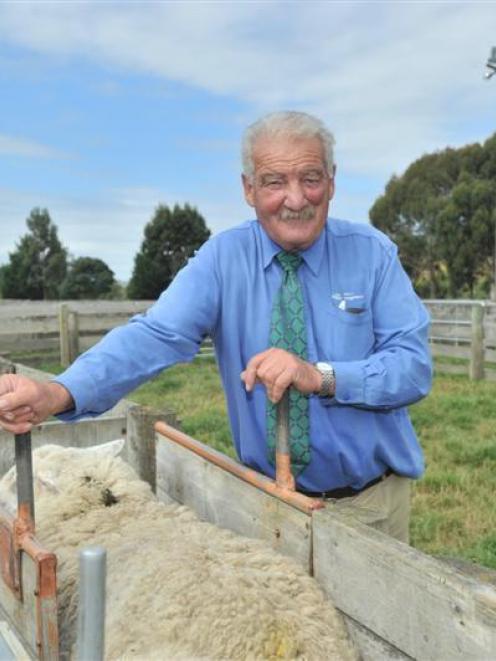 Long-serving PGG Wrightson stock agent Robin Gamble at the Allanton saleyards, near Dunedin. Photo by Christyine Linnell.
When Robin Gamble turned up to work at National Mortgage as a fresh-faced school-leaver, little did he know he would still be in the stock and station industry 50 years later.

But luck and loyalty had proved to be a great combination in half a century with the same company, he said.

There might have been a few mergers over the years, adding a few different coloured ties to his wardrobe, but he still considered that he had worked for the same company, now PGG Wrightson, he said.

Mr Gamble (67) grew up on the Taieri where his parents were dairy farming and, from a young age, he wanted to be a stock agent.

He attributed that to two factors; his father talking about his own stock agent who was ''a great guy'' and the fact that stock agents ''always had better cars than farmers'', he laughed.

After leaving school, Mr Gamble joined National Mortgage as an office boy, a job that included licking stamps and riding a bicycle around Dunedin delivering parcels.

He spent a year in the office but was always orientated towards livestock and he recalled being fortunate to be one of the office boys who was taken to the Burnside sale to help out.

''They probably thought I wasn't going to do any good in the office,'' he said.

Back then, the Burnside sale was ''huge'' and one of the main sales in New Zealand.

''That was my first experience meeting I suppose [what] you would call real men, or real people in the industry.''

There were ''huge characters'' involved with the sale and it was an ''amazing place to be'', he recalled.

Mr Gamble then spent a season as a trainee in Balclutha or as he put it, gate-opener and sheep chaser, working alongside Jack Carson.

Then it was back to the office in Dunedin in the off-season for more stamp-licking, but that gave him an appreciation and understanding for what went on in the office and for those who worked there, he said.

He was then appointed as a junior stock agent in Clinton and got his first car, which was a Cortina. It was a ''brilliant'' time working in a strong farming community, which also had a very strong sense of community.

He recalled some of his clients' wives coming into the company house, where he lived, picking up the washing and taking it home, returning it folded up.

After three years at Clinton, he moved to Milton which was where he got married and had two children, before moving back to the Taieri, which was still seeing the last of the ''glamour days'' of the Burnside sale. Taieri was always a trading area and that suited him, he said.

Mr Gamble later took on more of a management role, becoming livestock manager for the company's Dunedin office. He gave up that role in his early 60s and has continued as head auctioneer. He has always retained a client base as well.

Keeping things simple was one of Mr Gamble's philosophies.

''Live an uncomplicated life, keep it simple, be loyal and honest to your wife and family, your company, your clients, your workmates, your competition and yourself,'' he said.

His company and workmates had supported him and it had been, and still remained, ''a pleasure'' to work in such an environment.

The rural industry was a ''unique place to work in'' and the livestock industry played a big part in that environment.

Loyalty was still part of the key mix in the business and, over the years, client loyalty and trust had led to lifelong friendships, he said.

Handshakes were still ''absolutely a major part'' of farming and the rural industry.

''It's only the insistence of those outside the industry, basically, that require documentation, otherwise we would hardly need it.''

Mr Gamble believed it was important to accept change but the key to that was ''to make sure you're involved in it''.

He downplayed the length of service he had given his employer, saying he dealt with people every day who had been involved in farming for 50 years and longer.

''I don't see myself as any one special or different from all those people.''

Outside work and family, Mr Gamble's two great loves were rugby and fishing. Retirement was not on the cards ''at this point'', he said.