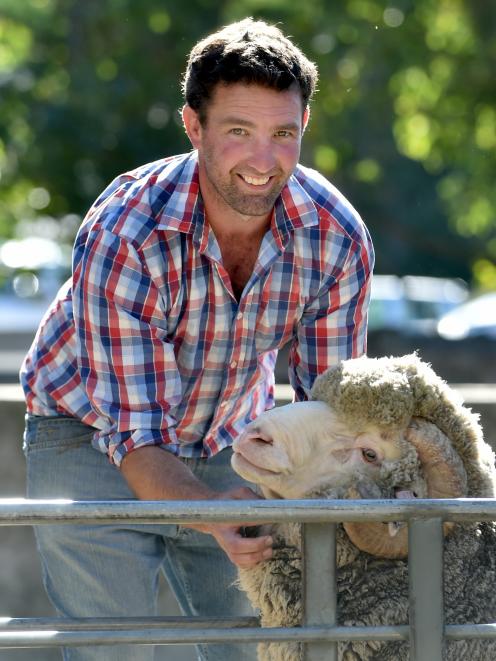 Simon Paterson is the fifth generation of his family to farm Armidale, in the Maniototo. Photo: Peter McIntosh.
The Paterson family, from Gimmerburn, have added to their considerable farming successes by winning the New Zealand ewe hogget competition.

The awards night for the competition, which was in its 21st year, was held in Cromwell on Thursday.The family won both the fine wool and crossbreed categories and the overall title went to their crossbreed flock.

Father and son Allan and Simon Paterson, with their respective wives, Eris and Sarah, are the fourth and fifth generations to farm Armidale, which has been in the family since the 1880s.

The merino stud at the property was founded by Allan Paterson’s grandfather George.  It lapsed during World War 2,  but  was later revived by Allan’s father, Bruce.

Allan, who spent some years shearing, returned to Armidale in 1975 and Simon returned home in 2005. The family operates a commercial sheep and trading cattle business alongside the merino stud. The 7500-8000 stock units wintered were mostly merinos, including 1000 stud ewes, but a flock of 1000 halfbred ewes was also maintained.

Long respected for fleece quality and quantity, Armidale breeds fine to medium wool, targeting use in the active outdoors market, while continually striving to increase carcass weight and maximise performance per stock unit.

The Paterson family have enjoyed considerable success exhibiting both sheep and fleeces over the years.

In April, the family won the WaterForce integrated management award and the Massey University innovation award in the Otago Ballance Farm Environment Awards.

Among their comments, the OBFEA judges said the farming operation was embracing high levels of production in a sustainable way, and there was a willingness to lead with bold new genetic initiatives for the benefit of fellow breeders and the wider industry.

Simon Paterson was ‘‘ecstatic’’ to win the ewe hogget competition.

"Some pretty prestigious flocks have entered and won before. It’s pretty cool to be named alongside them," he said.

Entering was a good way to benchmark their flock against others in the industry. There was also the opportunity to network with the judges, have a discussion and a chance to learn something from them, he said.

Asked the secret to their success, he attributed it to management and genetics. They always put a lot of emphasis on ensuring their hoggets were "right" and how they were treated in their first four to five months had a bearing on how they performed over the rest of their life.

It was a real family operation and he believed a lot of their success could be attributed to everyone being involved. Simon and Sarah have two young sons, Hugo (5) and Bede (nearly 3), who both loved farm life.

Rather than making wholesale changes, the family tended to make small changes to their business "every now and then". They tried to do "the little things right and stick to the basics", he said.

It was encouraging to see a bit more positivity in the fine-wool industry and good to see better store lamb sales.

Some of the fine-wool contracts gave a lot more confidence for farmers to invest in genetics, he said.

Results from the ewe hogget competition. —