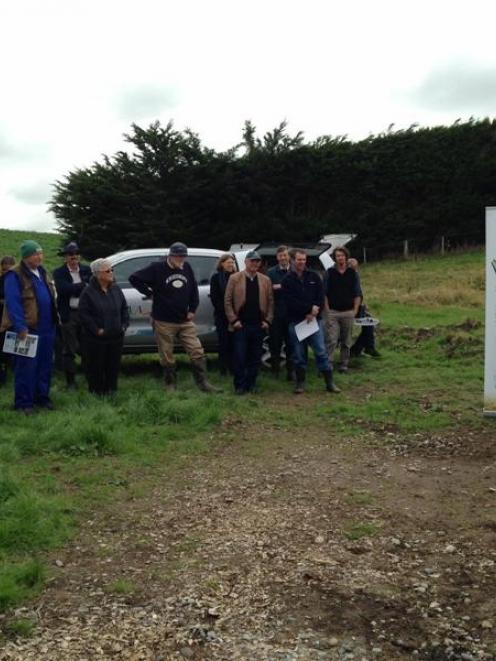 Dairy NZ water quality scientist Dr David Burger (right) talks about the nitrate catcher trial project during a field day at Waituna. Photo supplied.
Scientists are trialling a filter system which they hope will provide dairy farmers with a simple and cost effective way of removing nitrates and phosphorus before they reach waterways.

A nitrate catcher was commissioned recently near Waituna Lagoon, southeast of Invercargill, and a phosphorus catcher will be built nearby soon.

The nitrate catcher is a large, 1m deep pit filled with wood chips. As water from a farm field tile drain flows through it, naturally occurring bacteria consume the nitrate and convert it into harmless gas.

Project co ordinator and DairyNZ water quality scientist Dr David Burger said the phosphorus catcher would work on the same principle but without the bacteria, using a pit filled with zeolites _ absorbent minerals _ or possibly limestone, or Southland oyster shells, to absorb the phosphorus.

The pilot studies would each run for a year and scientists would monitor water flows and analyse the effectiveness of the systems, he said.

The $150,000 project is being funded by the Living Water Doc Fonterra partnership, Dairy NZ and the Ministry of Business, Innovation and Employment's clean water productive land fund. Niwa scientists are undertaking the science.

Dr Burger said concepts of the trial were widely used in sewage treatment applications around the world but this was the first time they had been trialled in New Zealand for treating water from agricultural tile drains.

Tile drains, commonly used in areas such as Southland where soils became saturated in winter, could accelerate the loss of nitrate and phosphorus into waterways, he said.

''Our aim is to see if this is a cost effective option dairy farmers could use. For them, we think creating a nitrate filter would cost less than $10,000 and involve a couple of hours on a digger, a PVC liner and some wood chips or another suitable material.''

The Waituna Lagoon, within the internationally recognised 20,000ha Awarua Wetlands, is regarded as one of the best remaining examples of a natural coastal lagoon in New Zealand.

However, there has been a marked deterioration in water quality in recent years and tests show the water is now dominated by algal slime. Environment Southland is working with other agencies to try to reverse this.

Dr Burger said the nitrate catcher was on the edge of a small stream which fed into the lagoon.

It was more suitable for slow moving waterways with low flows, he said.

''Something like this wouldn't work on a major river or lake. But if the trials are successful we hope it will have potential for widespread use on low lying undulating land in Southland, parts of the Waikato, Hauraki, and maybe the Wairarapa.''

Environment Southland director of operations and environmental information Warren Tuckey said his organisation welcomed the trials and staff would be closely watching the monitoring results for evaluating effectiveness.

He said 73% of all Southland farms had tile drains, a percentage he believed was the highest of any province in the country.

Environment Southland was also looking at ways to reduce contaminants going into Waituna Lagoon and its catchment.

About three months ago a trial wetlands area was built where water from a tile drain trickled through a series of vegetated ponds and through a phosphorus filter of limestone rock and oyster shells, before discharging into a stream.

While wetlands were a useful way to remove contaminants from water, they were costly, Mr Tuckey said.

''We've probably done $100,000 worth of earthworks down there. If DairyNZ can come up with a low cost alternative that is also effective, that's great.''