Onwards and upwards for millers 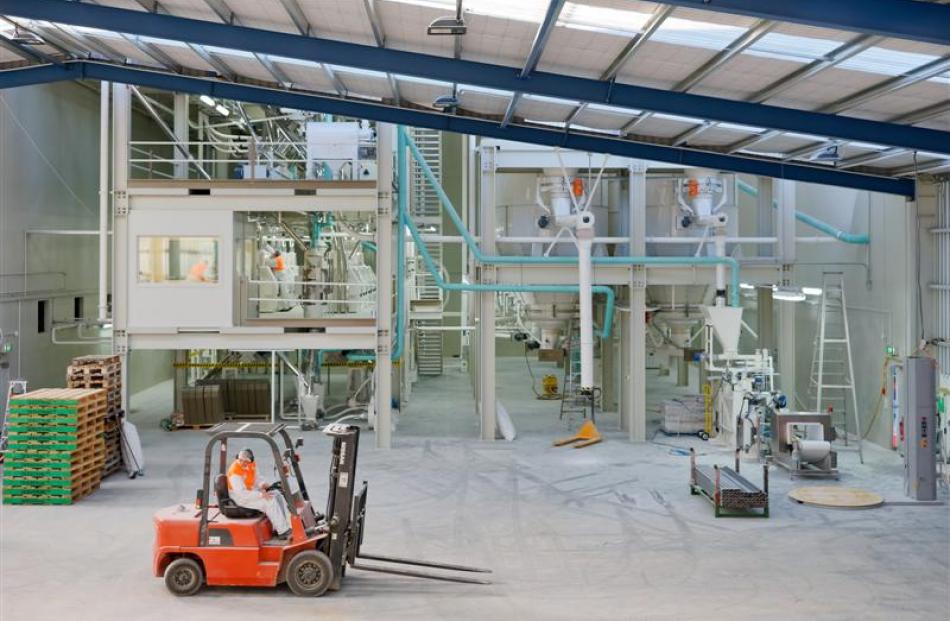 The interior of the Farmers Mill flour mill at Washdyke. Photo by Stu Jackson. 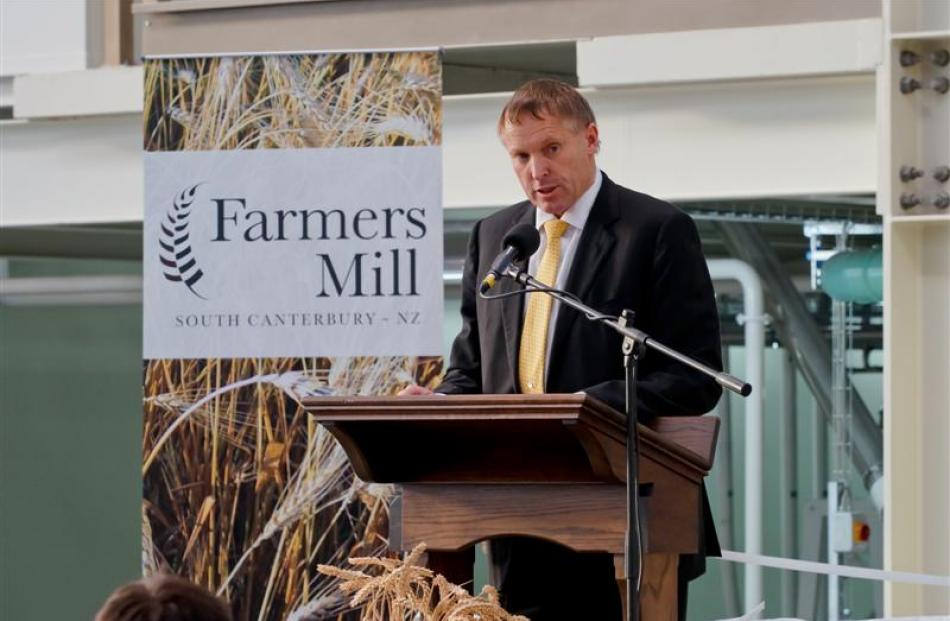 Farmers Mill chairman Murray Turley speaks at the official opening of the mill in May last year. Photo by Stu Jackson. 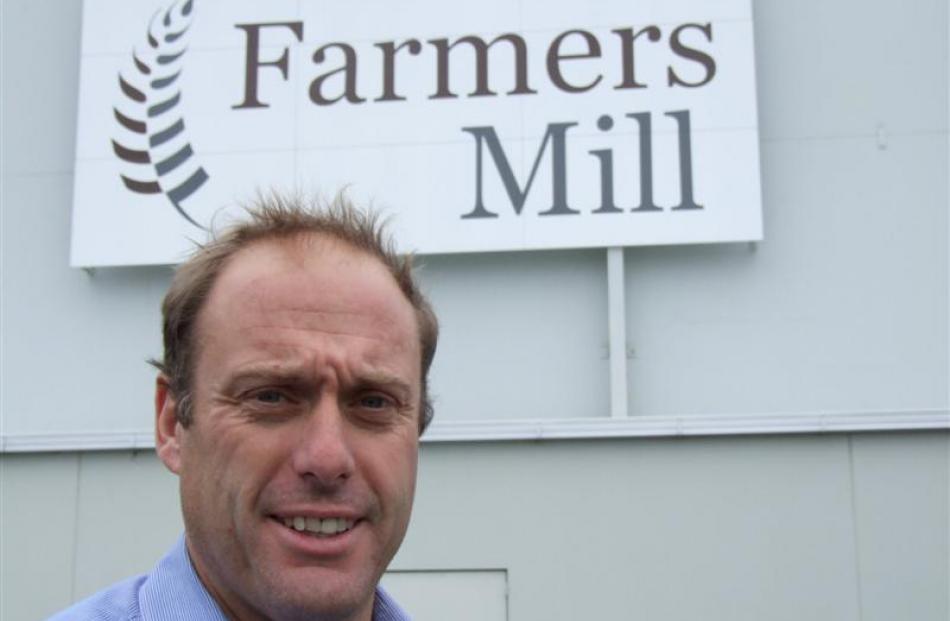 When Griffins Foods signed a contract to source flour from South Canterbury-based Farmers Mill, it was a leap of faith in a group of arable farmers.

At that stage, Farmers Mill did not have a mill, let alone the ability to supply a sample. Nor was there a track record in flour production.

''It's a great story in the sense that Griffins bought into the idea without a mill and no product,'' Farmers Mill chairman and South Canterbury farmer Murray Turley reflected.

He attributed the biscuit and snack food company's confidence in the yet-to-be opened mill to the security of the raw material and knowing the source of it.

Based at Washdyke, on the outskirts of Timaru, the $10.5 million mill was officially opened by Prime Minister John Key in May last year.

Retail outlets using Farmers Mill flour for artisan breads and pastry-based products include Little and Friday in Auckland, and Rangiora Bakery in Canterbury.

A relationship with French multinational yeast supplier Lesaffre - the world's largest yeast producer - has enabled Farmers Mill to extend its pre-mix range to include Lesaffre products, including gluten-free cakes and breads alongside traditional mixes and baking ingredients.

Farmers Mill's most recent innovation was its Smart Bake product range, a range of nutrition-focused pre-mixes. As well as low-salt mixes, there was also a range of sugar-free products.

The idea of the mill was first mooted in 2011, with building commencing in July the following year and the mill becoming operational in March last year.

Arable farmers were looking at different options and the mill was one way they could ''move up the value chain'' and attract some more value out of their wheat, Mr Turley said.

With farmers already owning a grain storage company on the site, part of the infrastructure was already there.

The Griffins Foods contract was secured before the decision was made on the size of the building and it was foresight that capacity was built in the mill so it would not have to be altered within the short-term, Mr Turley said.

The company's shareholders were all very successful operators, including the likes of Raymond Bowan, who established Heartland Potato Chips after buying the empty Bluebird factory at Washdyke, and Leighton Pye, from Pye Group.

Mr Turley's own operation, Turley Farms, is involved in large-scale grain, seed and vegetable production, growing close to 3000ha of crop in the Temuka, Rangitata and Chertsey areas.

He described the shareholders in Farmers Mill as a ''great crew'' and while, they competed in other areas of their arable businesses, at Farmers Mill they all pulled together ''to bring our full strength to the fore''.

''I think if Grant [chief executive Grant Bunting] asked us to jump over a cliff, we'd all jump, I don't know if we'd wait to draw who would go first,'' he said.

Establishing a mill was not a daunting prospect for the group - ''we didn't have time to think about it''. Rather, the sleepless nights were at the stage of getting the mill finished.

''You come down to the wire on a short project,'' Mr Turley said.

The success of the mill had exceeded expectations and it had ''great support'' from South Island businesses, he said.

It was no different from any start-up business - the key factors were financial resources, people resources and raw materials, and he believed all three were well covered.

The mill employed about 20 staff and the business had grown to include a second shift.

Mr Bunting said the flour being produced was high quality, which he attributed to the new mill, a very good miller, and a very tight relationship between the mill and the growers.

There was value in provenance and the product could be traced back to the farm. That was attractive to some exporters, especially if products were going into the Japanese and European markets, he said.

Before the establishment of Farmers Mill, there was no engagement between mills and growers, he said.

Having that close link was particularly valuable when it came to product development.

The establishment of the mill gave options to arable farmers, whether it was milling or feed grain that they grew.

The mill had taken business from others, rather than there being any increase in the New Zealand flour market, and there had been a substitution of New Zealand-grown grain for imported grain to make flour.

There was a lot of imported grain coming into New Zealand, Mr Turley said. The business had attracted some good people and career path or remuneration had not necessarily been relevant. Rather, it was all about a story, Mr Bunting said.

''There's something about this story ...

this is a real `good guy' story. That's what has got people interested,'' he said.

The company was about to embark on a joint venture, working with a tertiary institute on researching low GI. There was a big challenge at the moment around sugar, salt and gluten, he said.

Federated Farmers is encouraging farmers to help each other as cropping farmers in Canterbury and North Otago seek respite from a prolonged wet spell which is threatening specialist crops and cereals ahead of harvesting.

''This will have the same impact on cropping farmers as one metre of snow during lambing would have on sheep farmers. It's very serious,'' he said.

With shorter days and less heat, there would be limited opportunities for farmers to recover their crops.

Due to the wet ground conditions, crops were not suitable for harvest and, when they were, there would be a big demand on resources, he said.

Late-season small seed crops such as carrots and radish had been particularly affected, with significant areas still waiting for a break in the weather.